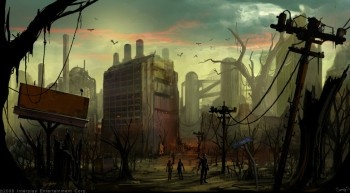 Bethesda Softworks has dropped its appeal of a failed preliminary injunction against Interplay, clearing the way for work on “Project V13,” AKA the Fallout MMOG, to continue.

Bethesda sued Interplay back in September 2009, claiming it had violated the terms of the contract it had to develop an MMOG set in the post-nuclear Fallout universe. Bethesda bought the Fallout franchise from Interplay in 2007 and then licensed the rights to an MMOG back to the studio, but claimed Interplay had failed to meet the funding and production obligations as stipulated in the contract. In December, a judge denied a preliminary injunction filed by Bethesda which would have kept Interplay from continuing to work on it.

But now it looks like all is well and everybody is friends again, or at least not lobbing acrimonious legal bombs at one another across a courtroom. Duck and Cover, which previously posted partial transcripts of the court battle between the two (available here and here), has quoted an Interplay investor by the name of “Frymuchan” as saying Bethesda has dropped its appeal of the injunction and made some sort of deal with the studio.

“Bethesda dropped their appeal of the lawsuit with Interplay and a secret deal was struck (maybe they will release the terms of the deal soon, probably so),” he said. “Anyways, this is awesome news for Interplay stock. The appeal by Bethesda was dropped yesterday. I’m assuming part of the deal was that Interplay drop their counter-suit against Bethesda.”

Text requesting the dismissal of the appeal from Bethesda’s law firm Steptoe & Johnson LLP is also posted, as is the court’s order of dismissal.

What happens next depends entirely on the alleged deal that’s been struck between the two companies. Has Bethesda extended or modified the terms of the license, or bought back the license with a few dump trucks full of money? If a new deal has been made, we’ll no doubt hear about it soon enough from both companies; if not, then we’ll just as certainly see them back in the courtroom soon enough.

Resident Evil Director Wants to Make Movies and Games Together