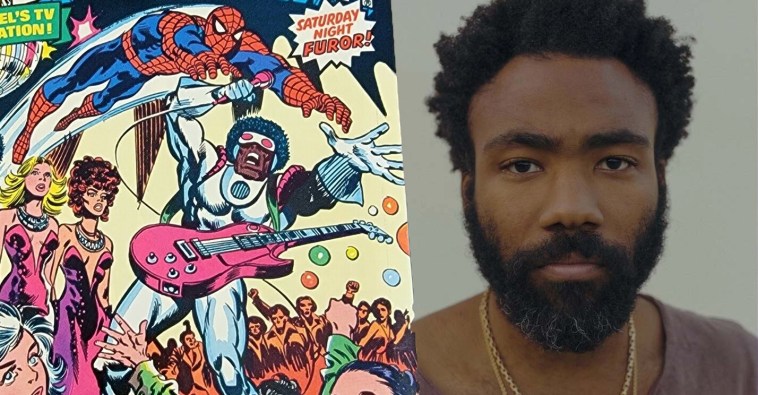 Actor / writer / comedian / musician Donald Glover will star in and produce a movie about Hypno-Hustler, an obscure and completely irrelevant Spider-Man villain, for Sony Pictures (per THR). Hypno-Hustler was born during the disco era as a character who could mass-hypnotize audiences with his band in order to subsequently rob them, so obviously this character demands a movie. The script comes from Myles Murphy, the son of Eddie Murphy, but no plot details have been divulged. Donald Glover reportedly was drawn to Hypno-Hustler due “to the musical aspect of the character and the fact that he has less Marvel cannon baggage, freeing him to greater interpretations.”

If Glover and Murphy have free rein to make the campiest nonsense possible, it could be fun, in the same way that the Venom movies are idiotic but fun enough to gross hundreds of millions of dollars. Alternatively, they could attempt to modernize the character, his musical inklings, and his place in society, but then Sony would have the herculean task of convincing audiences to watch a movie that wants you to take Hypno-Hustler seriously, which sounds like a fate worse than death. However, after Atlanta, you can never predict what Glover will do next.

Sony’s luck with Spider-Man spinoffs already imploded with Morbius, and that phenomenon seems poised to continue with El Muerto, Bad Bunny or not. The prognosis is perhaps a little more positive for Kraven the Hunter with Aaron Taylor-Johnson and Russell Crowe, but there’s really no telling what shape the Madame Web movie will take. Really, the most interesting project right now is probably the Silk: Spider Society series at Amazon.

Sony has owned the film rights to Spider-Man for years, and it has achieved some truly wonderful things, from the Sam Raimi trilogy to the Oscar-winning Spider-Man: Into the Spider-Verse and nostalgia explosion Spider-Man: No Way Home. Spider-Man: Across the Spider-Verse is expected to awe audiences all over again. But these spinoff movies do not garner any of the same interest or enthusiasm, so Sony Pictures has a long, long road ahead of it with whatever this Hypno-Hustler Donald Glover movie turns out to be.

That being said, Glover is no stranger to Spider-Man. He had a brief appearance in Spider-Man: Homecoming and voiced Miles Morales in the cartoon Ultimate Spider-Man.