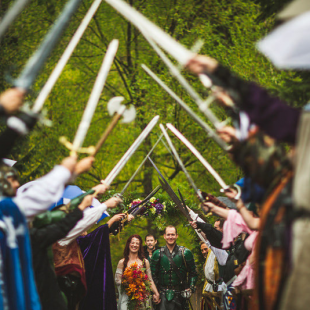 Heather and Bobby Lord used their love of fantasy to plan a Game of Thrones and Lord of the Rings wedding for the ages.

For most (happy) couples, there are few days quite as magical as their wedding day. Vows are exchanged and bonds are formed that transform two people irrevocably. For most, that figurative, emotional magic is enough. That being the case, the world occasionally spawns a couple who look to their wedding and want a bit more. Heather and Bobby Lord, for instance, looked at their nuptials not just as an opportunity to make a life-long commitment, but also as a chance to celebrate their shared love of all things fantasy.

Settling on a “Lord of the Rings meets Game of Thrones theme,” the two held their wedding (May 24th, 2014) at Dunafon Castle in the Colorado mountains. The couple’s ceremony, in turn, combined elements of their Pagan beliefs and included music from Pirates of the Caribbean, Morrowind, Skyrim and The Lord of the Rings. The bridesmaids and groomsmen were all also dressed in custom clothing and armor representing phoenixes and dragons.

At the reception the wedding party dined at three fantasy-themed food stations featuring items like Lembas Bread and “Orc Pot Pies.” The wedding cake, in turn, featured four layers including one fashioned after the One Ring from The Lord of the Rings and another with dragon scales. Wrapped around the cake was a 3D dragon accompanied by a phoenix topper. The couple cut the cake with a sword and then spent their wedding night in a room “fashioned after a tree house.”

It should be said that the evening wasn’t without its problems. The weather, for instance, wasn’t entirely cooperative and “poured down rain” during the ceremony. Setting up and removing the decorations was apparently also a challenge thanks to the venue’s strict timing rules. That said, it looks and sounds as though the Lords had a blast and, honestly, just looking at their pictures it’s not hard to see why.