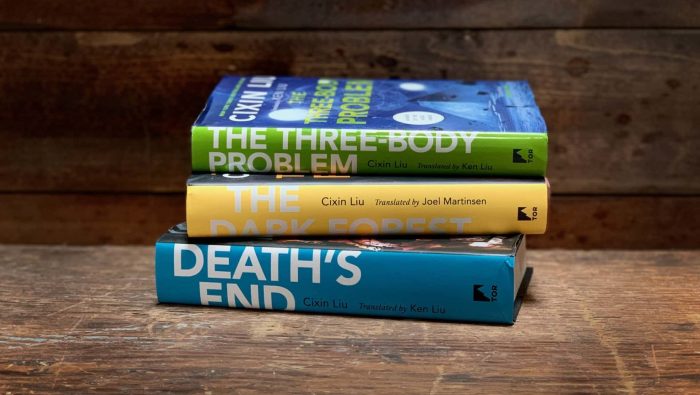 David Benioff and D.B. Weiss, the guys behind the Game of Thrones television series, have announced the first show in their production deal with Netflix. The pair, along with Alexander Woo (The Terror: Infamy, True Blood), will be writing and executive producing an adaptation of Chinese author Liu Cixin’s The Three-Body Problem trilogy. Author Liu Cixin and Ken Liu (who translated the first and third books into English) will serve as consultants on the series. These aren’t the only big names attached to the show, as Rian Johnson and Ram Bergman are set to executive produce through their production company T Street Productions, and Rosamund Pike is as well through production company Primitive Streak.

Benioff and Weiss are obviously no strangers to adapting prolific and seminal works of writing, and The Three-Body Problem and its two sequels, collectively called Remembrance of Earth’s Past, are definitely that. Originally published in 2008, the first book became one of the most popular sci-fi books in China. The eventual English translation, published in 2014, went on to become the first novel from Asia to ever win the prestigious Hugo award. The books focus on humanity’s first contact with an alien race in an alternate history story that jumps around in time.

“David Benioff, D.B. Weiss, and Alexander Woo have experience tackling ambitious sagas over time and space. Rian Johnson and Ram Bergman have long dazzled fans with thrilling and mind-bending epics. They are all fierce advocates of The Three-Body Problem,” said Peter Friedlander, VP of Original Content at Netflix, in the blog announcing the show.  “As ardent fans, it was especially meaningful to us to get the support of Liu Cixin who created this expansive universe. We all share the same goal: to pay homage to this incredible story and take members on the adventure of a lifetime.”

Fans of the series might feel a bit of trepidation with Weiss and Benioff at the helm, given how the pair drove the conclusion of Game of Thrones into a big mess that no one liked. However, unlike A Song of Ice and Fire, this series is concluded, so they have a path mapped out for them already.

Netflix has not announced when production will start on the show.