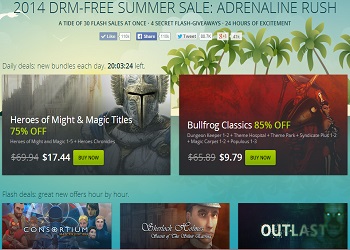 GOG has launched 24-hour Adrenaline Rush sale will include free giveaways games and prices slashed by as much as 90 percent.

While the discount spotlight is, at this point, pretty much fixed on Steam’s summer parade of slashed prices, it’s worth remembering that Valve’s cash printer isn’t the only digital games storefront currently riding the train to discount town. Hoping, in turn, to remind gamers of that fact and perhaps draw some customers back to its own summer sale, GOG has announced a day of deep discounts cutting its game’s prices by as much as 90 percent.

Included among today’s sale items will be a variety of single and collections that will include retro games, indie titles and a wide swathe of genres. For instance, if you were to head over to GOG at the exact moment that this article’s being written (12:41 EST) you’d be able to pick up Hotline Miami, Nexus: The Jupiter Incident and Carmageddon 2 for $2 each (80 percent off). According to GOG’s release, the day’s offerings will also include a variety of giveaway games that attentive customers will be able to snag for free.

Of course, the Adrenaline Rush sale event is only running for 24 hours so if there’s a particular GOG game that you’ve had your eye on, you may want to check into the site regularly to make sure it’s not sitting there all discounted and ripe for the PayPal-ing.