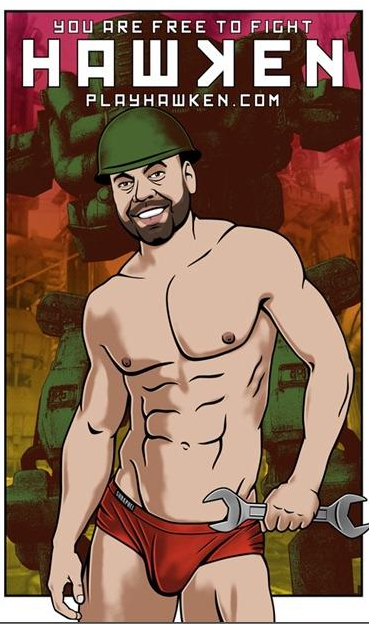 Ahh, the post-apocalyptic breeze; see how it sets the banana hammock in motion.

“I have it good,” admits the anonymous Hawken developer behind Brosie the Riveter. Great job, fun working conditions, and top shelf gender awareness standards. Half the executive staff are female, “half of them are punk rock,” says the prankster, “and all of them are badassed.” So what’s not to like? Well, the cheesecake poster on the outward facing wall in the CEO’s office, one which the anonymous developer had to see every single day, first thing in the morning as she came to work, again at night as she left, and when she – along with the other staff – signed it during the holiday party at the CEO’s request, vengeance was sworn. Vengeance, Brosie style.

Two bottles of expensive tequila later, she had her ally: Sam Kirk, an artist and co-worker who shared her dislike of the artwork in question. With his talented help she created the wonder you see before you, “proud, nipples testing the air like young gophers in springtime, the post-apocalyptic breeze gently swaying his banana hammock.” Brosie the Riveter, suitably framed, was surreptitiously smuggled into the building in the small hours of the morning and swapped with the offending piece. Her co-workers, arriving for the daily grind, were startled to see Brosie where Rosie once stood; some grin, some ask for prints, some flee. Then the boss gets in.

If you were expecting a tragic end, that’s not what transpired. “That was a brilliant prank,” he told the prankster. “You called me on exactly the bullshit I need to be called on.” Now Brosie and his female counterpart hang side by side in the CEO’s office. His creators got lunch on the CEO’s dime, and the woman whose brainchild he was has a new credo. “Let’s turn this damn industry into the environment we want it to be,” she says. “It’s hard work, and yes, there are a couple genuine assholes along the way. But if Ruby Underboob can brave the occasional droplet of molten metal, so can we.”