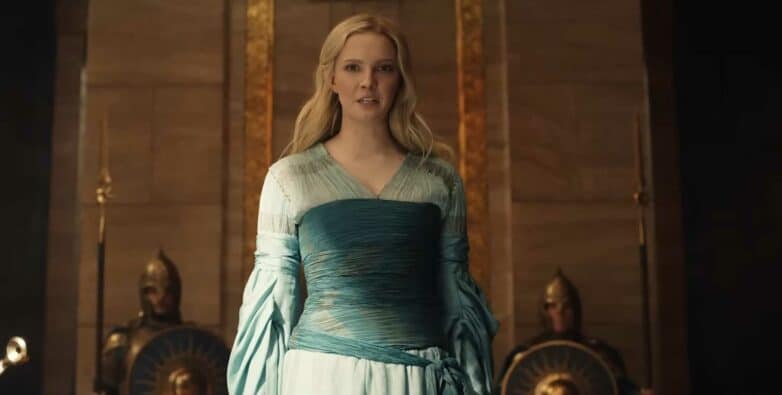 This discussion and review contains spoilers for The Lord of the Rings: The Rings of Power episode 3, “Adar,” on Amazon Prime Video.

With “Adar,” the structures and rhythms of The Rings of Power come into sharper focus. Following the two-episode premiere of “A Shadow of the Past” and “Adrift,” “Adar” offers a sense of what it will be like to watch The Rings of Power unfold on a week-to-week basis. The answer is seemingly “Game of Thrones, but in Middle-earth.”

This isn’t too much of a surprise. The Rings of Power reportedly originated with a simple edict from Jeff Bezos: “Bring me Game of Thrones.” One of the tensions of the show has been how it would reconcile the very different worldviews of authors J.R.R. Tolkien and G.R.R. Martin. Watching “Adar,” an answer presents itself. The themes, characters, lore, tone, and worldview are all taken from Tolkien. However, the actual structure of the show is lifted from Game of Thrones.

It is clear that The Rings of Power will be splitting its storytelling across a variety of plot threads happening simultaneously over a vast geographical distance. The show helpfully uses maps to guide the audience through these transitions, bouncing from one plot thread to another. This is similar to how Game of Thrones would structure its episodes, fracturing its attention across multiple storylines to the point that individual episodes could feel like short story anthologies.

Part of the problem with “A Shadow of the Past” and particularly “Adrift” was the sense that the show was having a great deal of difficulty establishing these threads in parallel. Indeed, Galadriel (Morfydd Clark) seemed to spend most of “Adrift” on a raft simply so that her plotline could stall to let the threads neglected in “A Shadow of the Past” catch up to her. There was a lot of setup but little room for character or plot. It could feel a little bit like homework and place-setting. 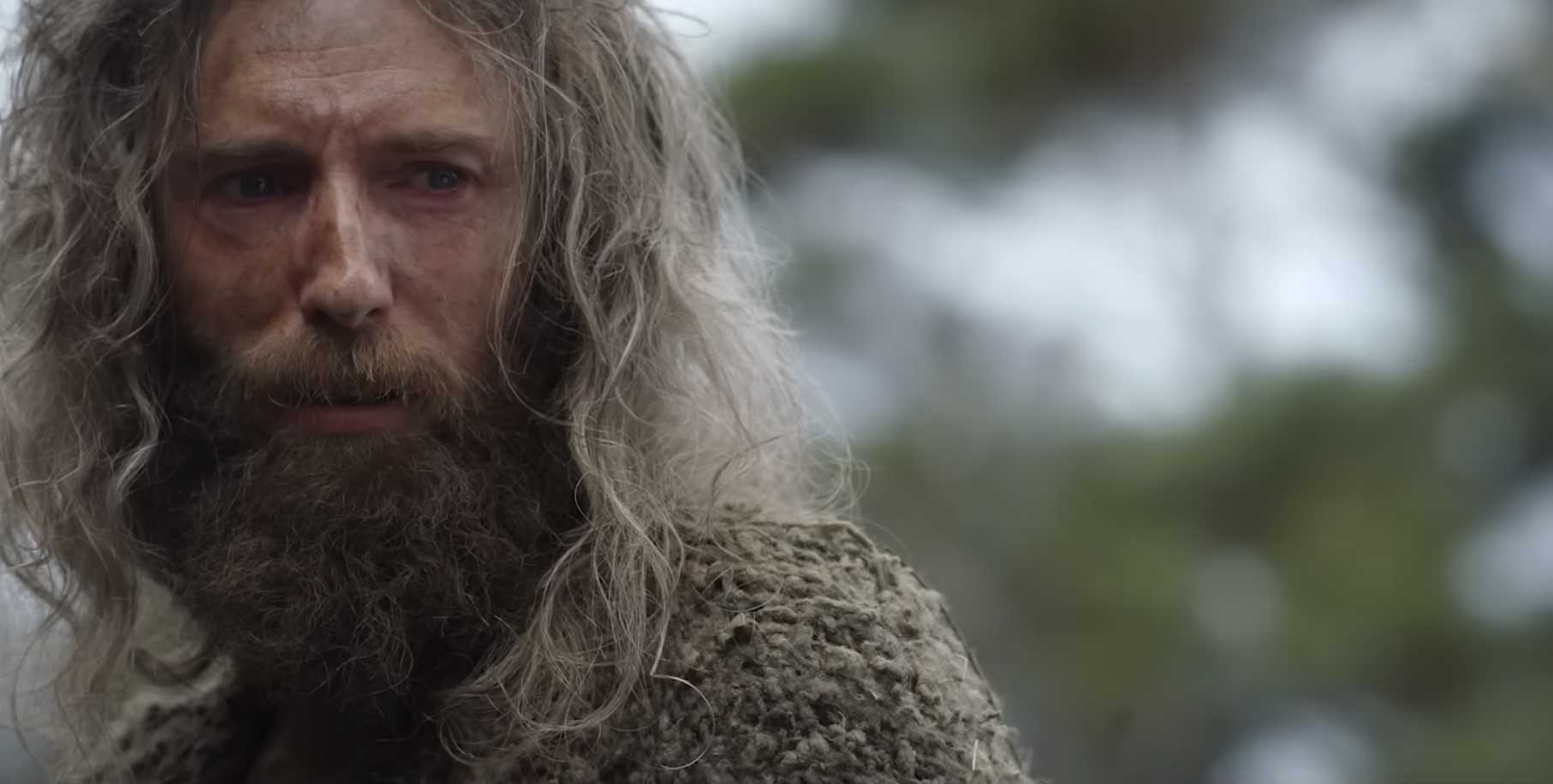 “Adar” wisely tightens its focus to three of the show’s five major storylines. Galadriel and Halbrand (Charlie Vickers) visit the island of Númenór. Arondir (Ismael Cruz Córdova) is enslaved by the orcs, alongside Médhor (Augustus Prew) and Revion (Simon Merrells). Nori (Markella Kavenagh) finds herself in trouble among the harfoot community for sheltering a mysterious stranger (Daniel Weyman) who fell from the sky.

This means that “Adar” doesn’t have to worry about two of the other balls set in motion by “Adrift.” The episode doesn’t catch up with the march of the refugees led by Bronwyn (Nazanin Boniadi) and her son Theo (Tyroe Muhafidin). Elrond (Robert Aramayo) is also absent from the episode, which neatly delays any potential payoff from the literal “mystery box” teasingly opened by Durin III (Peter Mullan) and Durin IV (Owain Arthur) in “Adrift.”

It is a shrewd decision to pull back from the structural overload of “Adrift.” With just three parallel plot threads, “Adar” can spend 20 minutes on each of its three locations, allowing the episode to develop Númenór as a location with a distinct culture and history. Indeed, “Adar” seems to be using Galadriel’s arrival on the island as a tangent that spins off to other important characters like Elendil (Lloyd Owen) and his son Isildur (Maxim Baldry), who will likely support their own storyline.

This is a move taken directly from the early seasons of Game of Thrones, where the series would often wait for an existing character to visit a location before establishing that location as a place to which the show could return. Ned Stark (Sean Bean) and Tyrion Lannister (Peter Dinklage) might stop off by the Wall on their journey to King’s Landing, but their presence was enough to establish the Wall as an important location with an established cast and its own unfolding story. 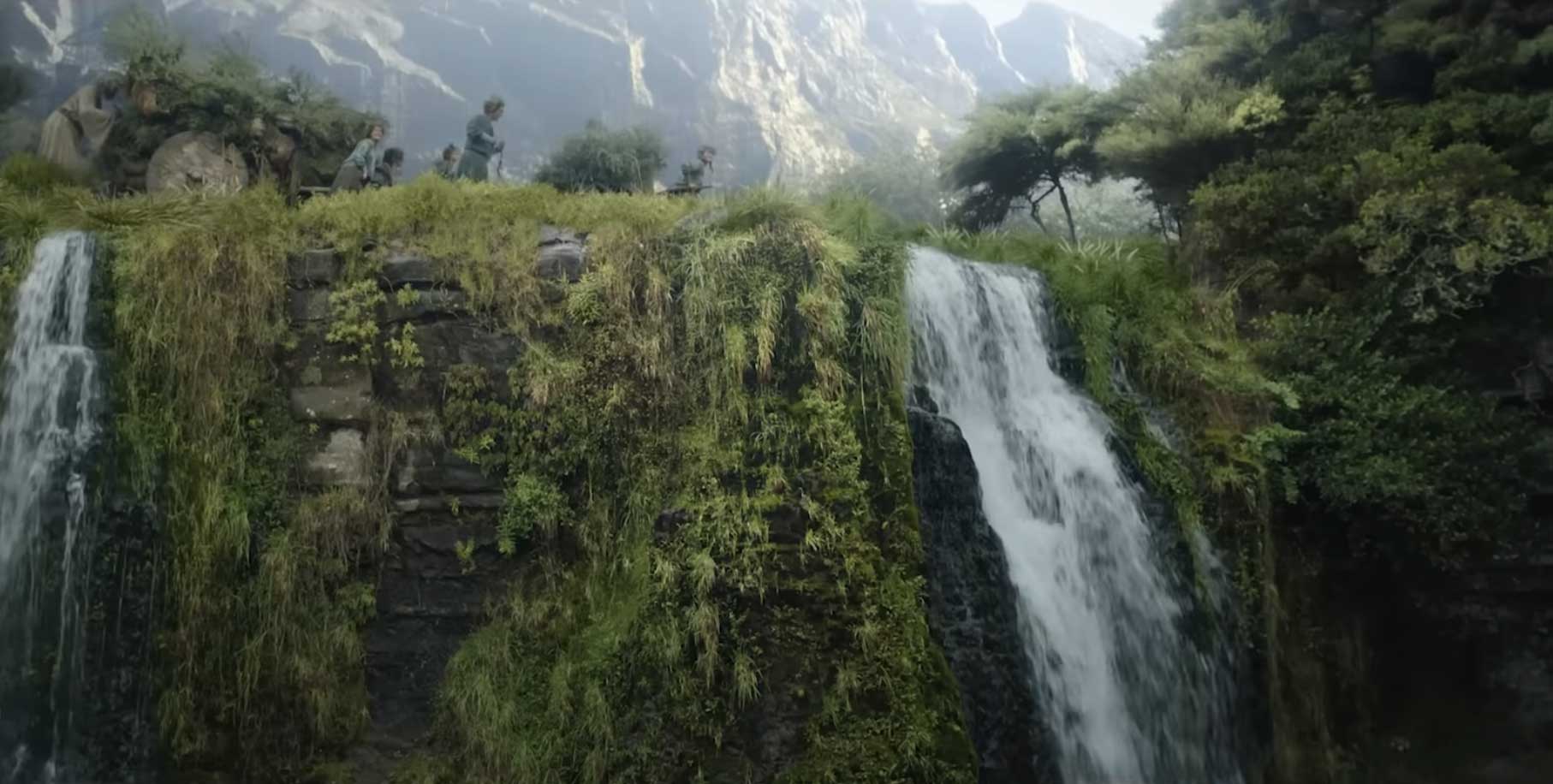 It was a modest and restrained approach, which allowed the scope of Game of Thrones to grow and develop over the show’s early seasons. This clever structural conceit may have played a part in the show’s accessibility to audiences unfamiliar or uncomfortable with fantasy tropes. Ned was the protagonist of the show’s first season, offering something of a guided tour of Westeros in a way that cleverly taught its audience how to watch the series.

Of course, this structure was arguably just an extension of what Peter Jackson had done in his cinematic adaptation of The Lord of the Rings, which began with Frodo (Elijah Wood) in the Shire and then picked up new characters as it went along. The Fellowship built up over the first film, but then the second film could follow smaller subsets of its members as they fractured and embarked on separate adventures. It’s a good way to structure a serialized narrative so it feels organic.

It also allows The Rings of Power to serve as something of a travelogue of Middle-earth, taking advantage of the extended running time of a multi-season show to guide viewers on a trip around this imaginary world. As one might expect, given the budget, The Rings of Power luxuriates in the beauty of its surroundings. Helicopter shots provide an impressive sense of scale and wonder. Galadriel and Elendil horse-ride in slow motion, like they are filming a commercial for New Zealand tourism.

However, there is a weird tension to all of this. Part of what was exciting about watching Peter Jackson realize something like The Lord of the Rings on screen was the reality that there had never been anything quite like it before. While Tolkien’s text was a landmark work in the fantasy genre, Jackson was taking audiences on a trip into a world that was utterly unlike any previous big-screen fantasy epic. It was an adventure into mystery for the audience as much as for Frodo. 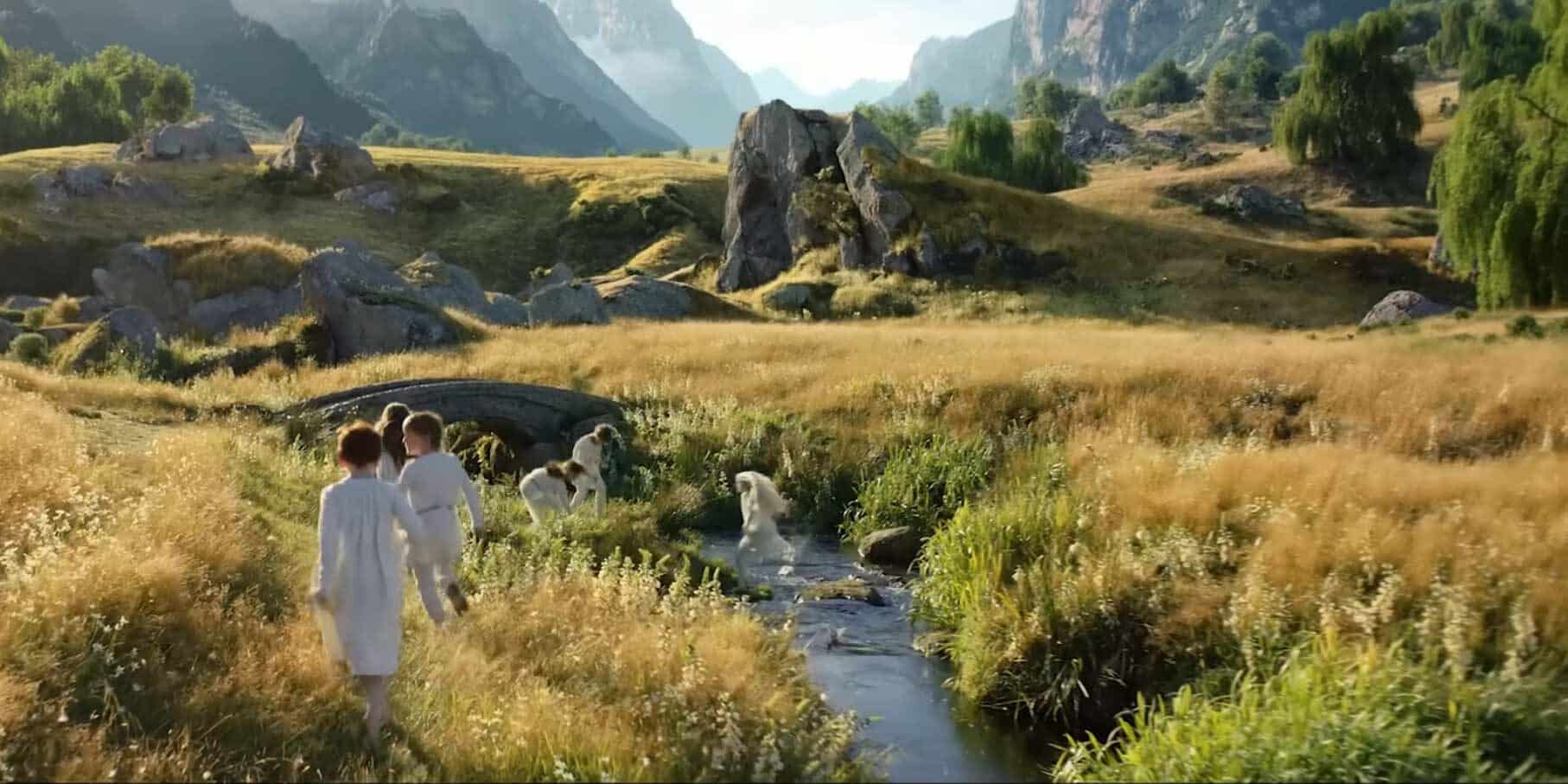 In contrast, The Rings of Power never feels like it’s going anywhere new. The show is set thousands of years before the events of The Lord of the Rings. That is the distance between the present day and the Roman Empire and between the Roman Empire and the dawn of Babylonia. However, everything in the show looks like Aragorn (Viggo Mortensen) would feel right at home. Even the New Zealand locations aren’t quite as exciting and unexplored as they were 20 years ago.

“Adar” takes Galadriel to Númenór, but it really doesn’t look too different from the human civilizations in Jackson’s trilogy. There are obvious reasons for that, given the continuity that Isildur provides. However, it’s very much beat-for-beat. The ship passing the stone heads coming into the bay recalls the giant statues at Argonath. The multilevel castle built into the cliff face evokes Minas Tirith. Númenór is supposed to be wondrous and magical, but it feels just like Gondor.

Galadriel talks with awe about “the westernmost of all mortal realms” and “the island kingdom of Númenór,” but it’s all things the audience has seen before. This is true of the episode’s other plot threads. The big money shot during Arondir’s failed escape is the cry of “Release the warg!” but audiences have seen plenty of wargs in the Lord of the Rings and Hobbit movies. Even Nori’s arc as “just one little harfoot in a grand, wide world” recalls that of Frodo or Bilbo (Martin Freeman).

The Rings of Power leans heavily into spectacle, offering viewers drama and action on an impossible scale. However, it’s hard to get excited about a travelogue that seems to be revisiting all the familiar places. “Good little harfoots, stick to the path, flee every danger,” Nori sarcastically repeats at one point. “Heaven forbid we explore anything new for a change.” There is a sense that The Rings of Power could listen to its harfoot hero. 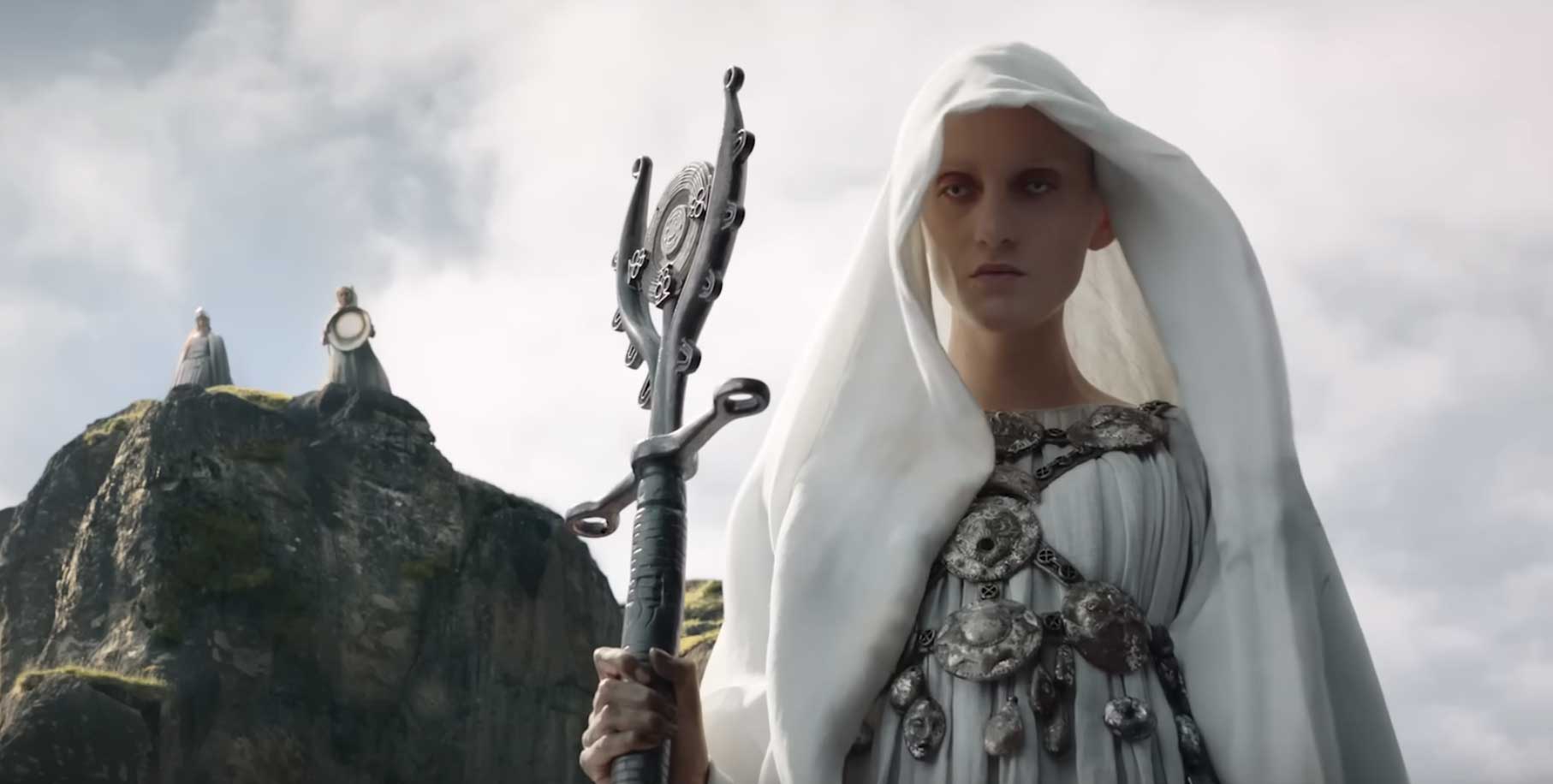 This familiarity is a bigger problem when it comes to the show’s mystery boxes, including the identity of the man who fell to earth. There are a number of interesting possible answers from the text: He could be a blue wizard or a balrog, neither of which has been explored on screen. However, the rules governing these sorts of shows mean that he must be shockingly revealed as a familiar character at some point late in the season, possibly as a cliffhanger for when the internet audience is losing interest.

Logic suggests two tangible possibilities. The boring answer is that the stranger must be Gandalf, something that even the most casual viewer could guess weeks in advance. The curve-ball answer is that he is some manifestation of Sauron, which would make less sense and so be less predictable, even if Halbrand makes more sense to tie to Sauron. Still, the show’s nostalgic framework and insistence on familiar iconography means he must be something familiar. (Maybe he is Saruman.)

Then again, it’s hard to justify trying anything too new when crafting a blockbuster television show with a budget that amounts to three quarters of a billion dollars. This is the challenge facing The Rings of Power. Amazon paid $250M for the rights to an existing intellectual property, so why wouldn’t it lean into what viewers already know? However, part of the original appeal of Peter Jackson’s Lord of the Rings movies was that they put things on screen that nobody had seen before.

As an aside, it is darkly funny that “Adar” includes a scene where Halbrand is blocked by union regulations, with a blacksmith (Phil Vaughan) warning him, “Until you’ve earned your guild crest, you can’t forge steel in Númenór.” It’s likely a coincidence, but Amazon’s flagship show presenting unions as an unnecessary obstacle feels as appropriate as a company owned by Jeff Bezos making two separate shows about how maybe Lex Luthor’s superhero adversary is a bad guy.

Following on from the two-episode premiere, “Adar” offers a blueprint for how The Rings of Power will continue. It’s adopting the compelling narrative template established by Game of Thrones, ironically as House of the Dragon has moved away from that same model. It’s a fitting way to explore this fantasy realm. Let’s just hope that it can discover something new to show the audience.