My destiny is as intertwined with that of the Monkey Island series as genitals in a communal shower room full of extremely heterosexual men. It was one of the first games I had on my old Amiga 600, back when games were like breakfast cereals, ridiculously large cardboard boxes full of ungainly multitudes of flimsy brightly coloured objects. It fostered my early love of point and click adventure games and was the starting point for industry luminaries like Tim Schafer whose careers I follow to this day. And I’ve witnessed first hand the broken-legged stumble through the wilderness that has been Monkey Island sequels since Monkey Island 2, when original designers Ron Gilbert and Dave Grossman closed things off with a weird hard to follow existential downer ending before setting the studio on fire and buggering off, middle fingers held high, and if this was Gilbert and Grossman playing the long, long, LONG game then it’s finally paid off because after several sequels by other people, all with a fairly broad and debatable level of wishy-washiness, they’ve now finally come back to close things off with the definitive wishy-washy Monkey Island sequel, Return to Monkey Island.

And right out of the gate the wishy-washiness is on full display because while the game specifically addresses that weird Monkey Island 2 ending, it also establishes the events of every subsequent game as canon as well, it’s just none of it seems to have mattered much. In fact, very little matters much. Guybrush Threepwood, inept wannabe pirate hero whose funny name has a story behind it that will unfailingly kill the conversation at any dinner party on God’s green Earth, arrives back on Melee Island from the first game with a vague notion to resolve the series running gag that we never established what the Secret of Monkey Island actually was, and nobody he meets gives a shit. Also his arch nemesis Lechuck the evil ghost demon pirate and terror of the Caribbean is docked at the island to take on supplies and crew and no one seems to give much of a shit about that, either, even though, in context, this should be like if Megatron pulled up to the McDonalds drive-thru window and asked if they were still doing fifty cent ice creams. So question one: how much investment in the Monkey Island series do you need to get the most out of Runkey Monkey Lunkey? Answer: Buttockloads. Like, in a big pile somewhere.

It’s returning characters and assumed knowledge of prior events a go-go. If old fans are the target audience that would explain the period key being the skip dialogue button just like the Lucasarts games of old which even then was as convenient as keeping the toilet and the toilet paper in separate rooms, but that clashes with the terribly modern art style where everyone looks like the slapdash cardboard replica of themselves they put in their bed to fool the prison guards. Also, while the plot does the bad fanwank sequel thing where the struggle between the hero and the villain is treated as some kind of cosmic inevitability, again, no one besides the two of them seem to give much of a shit. There’s an overhanging theme that the world is moving on and leaving them behind. The leaders have changed, all the old shops have shut down to get replaced with new ones, the ageing Threepwood’s cluelessness comes more from an inability to adapt than his previous youthful naivete, it’s all terribly appropriate as a reference to Monkey Island’s place in the world of 2022 and the feelings the creators have about it, but it’s hard to feel there are any narrative stakes worth investing in. Threepwood and Lechuck feel less like mortal enemies and more like rival coworkers who’ve been giving each other the side-eye in meetings ever since one of them stole the other’s lunch from the fridge.

The titular Return to Monkey Island happens relatively early on in the game with the same air of tired expectation one feels when someone shows up to your party with a guitar. You piddle about there for a while and then piddle your way back to Melee Island. And at that moment things were starting to feel a bit half-arsed, or at the very least quarter-buttocked, since all we’ve done so far is speedrun the first game in student webcomic-o-vision. But then, after the Return To and From Monkey Island, suddenly this whole second half of the game shows up with multiple new islands to visit and there’s intrigues and new villains and stuff happening and the needle on the buttock meter jumps back up again. Sadly the puzzle design for most of this can’t muster more than .4 of a buttock at most. I don’t know what the fuck happened between the mid 90s and now that made all new adventure games allergic to intricate puzzle design, but let’s make a direct comparison. In Monkey Island 2, you have to win a spitting contest at one point. To do this, you have to figure out to buy the blue and yellow drinks at the bar, combine them to make a green drink that makes your spit thick, blow a foghorn to distract the crowd so you can move the flags back a bit, then only spit when you see someone’s scarf blowing in the wind.

Then you write into Amiga Power and thank them very much for publishing a walkthrough. In contrast, in Return to Monkey Island you have to win an eating contest. You put hot pepper on your opponent’s meal. And that’s it. And this was on the harder puzzles setting. Fuck knows what easy’s like. They probably put the hot pepper on themselves while giving you a hand shandy. Surely Yahtzee, there’s no point in wasting effort on puzzle design in the internet age when we can just google the answer at the slightest speedbump, I assume that’s why Return to Monkey Island has an in-game hintbook, to cut out the middleman, unless it’s to stop players accidentally activating too much of their brain, thinking about modern society and turning into Heath Ledger’s Joker. That’s not the point. Every step of the above described esoteric process for the Monkey Island 2 spitting contest was an opportunity for jokes, worldbuilding and funny touches. Without lots of little branches and twigs on the apple tree there’s not enough room for the apples to grow, and then it’s all just mulch on the forest floor, useful only for covering up your dog’s turds when you forget to bring a little bag.

But at the end of the day, if you are a Monkey Island fan you kinda have to play this because they made it specially for you, same reason you have to wear your grandma’s sweater at Christmas. There is enough humour and imagination on display to make one recommend it, in which case, allow me to explain why I don’t. OOH A TWIST IN THE TESTICLES THERE. It’s the ending. Again. History runs in fuckin’ cycles. Not that it’s as one-sixteenth-bottomed as everything else, they’re clearly making a deliberate statement with it. It’s just that I interpret that statement as follows: “Oh! Have you actually invested mental energy into all these intrigues and relationships we’ve spent the last few hours building up and are expecting a payoff to all that? Pfuh! Talk about missing the point. What a sad lame-o you must be. The end.” And then just to grind the heel in a bit there’s a personal message from the creators: “Ah, when you think about it, Monkey Island 1 was about a wide-eyed naif discovering themselves, Monkey 2 was about trying to recreate a success that the wider world didn’t care that much about, haven’t these games always been about where we were as creators?” Oh, okay. So you’re saying the final message of Return to Monkey Island is, we’ve stopped giving a shit and so should you. Message received. How about next time you just tweet that and not charge me twenty bucks. 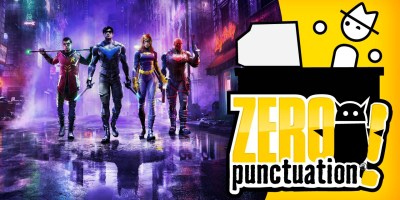 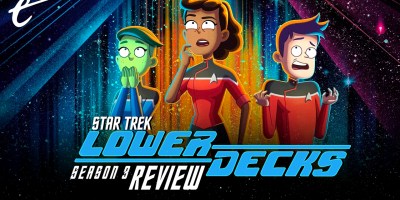 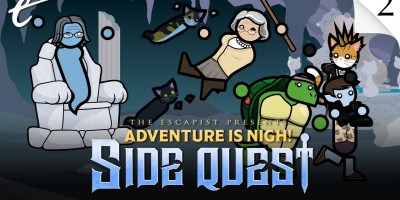 Adventure Is Nigh: Side Quest Episode 2 – Foreshadowing