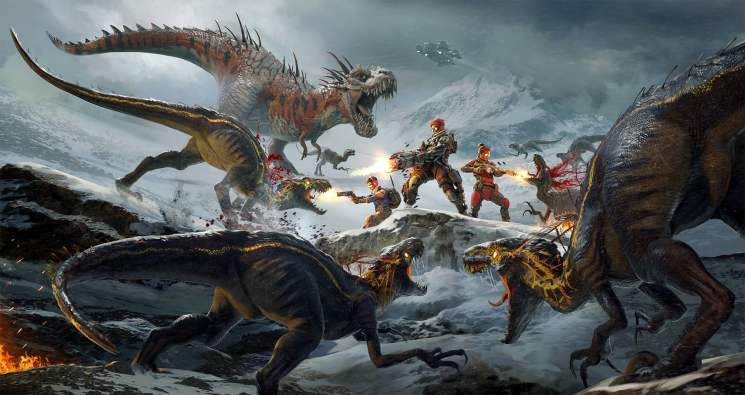 Dinosaurs have never looked more merciless than in Second Extinction, a bloody co-op survival FPS that sees players shredding through waves of mutated beasts. This is the second game from Just Cause developer Avalanche Studios’ new branch, Systemic Reaction, and was announced during the Inside Xbox presentation today. Up to three players can team up to completely dismantle dinos in gory fashion, but you can see some of this gameplay for yourself through the Xbox Series X footage below.

Second Extinction follows a group of survivors as they return to Earth after mutated dinosaurs wiped out most of humanity. Taking back the planet requires use of the game’s different weapons and abilities, as it seems the dinosaurs can quickly overcome the three-player squads. Teamwork is key for those hoping to progress through Earth’s varied dino enemies – electric raptors and behemoth T-rexes were given as examples. Upon each mission completed, players will have to make the trek back to safety, where weapons can be purchased and upgraded.

Systemic Reaction teases that players will have an impact on Second Extinction’s war in some capacity. The game will release with four survivors to choose from with more coming post-launch. If you’re looking to jump into Second Extinction, you won’t have to wait long, as a closed beta period is scheduled to start sometime this summer on Steam.

Second Extinction has no release date, but you can expect to play it on Xbox Series X, Xbox One, and PC.

Yakuza: Like a Dragon, Scarlet Nexus, Call of the Sea, and The Medium were just a few more of the titles showcased during the Inside Xbox showcase.