Because we love you, enjoy this gigantic collection of cosplaying genius.

PAX East may have been last week, but the official start of convention season is happening now, as Wondercon 2014 wraps up tonight in Anaheim, CA. Naturally, we were on the scene for the little sibling to, and in many ways dry-run for, this summer’s San Diego Comic Con, and we saw some panels, caught a couple of screenings, and ate too many pretzels. We also got to spend a couple of days basking in the reflected glow of total dedicated fandom as thousands of cosplayers turned out to show off their stuff and, perhaps, get some practice in before the big event this July.

To prove it, we’ve brought back a huge collection of pics featuring some of the best and funniest cosplay on display over the weekend. From like the entire DC universe to video games to The Venture Bros., we had constant reason to be impressed. And now you will to. Read on, O Readers, and check out the best cosplay from Wondercon 2014. We’ll start right now with this remarkably apt Spider-Man costume, complete with lithe Spidey posing action! 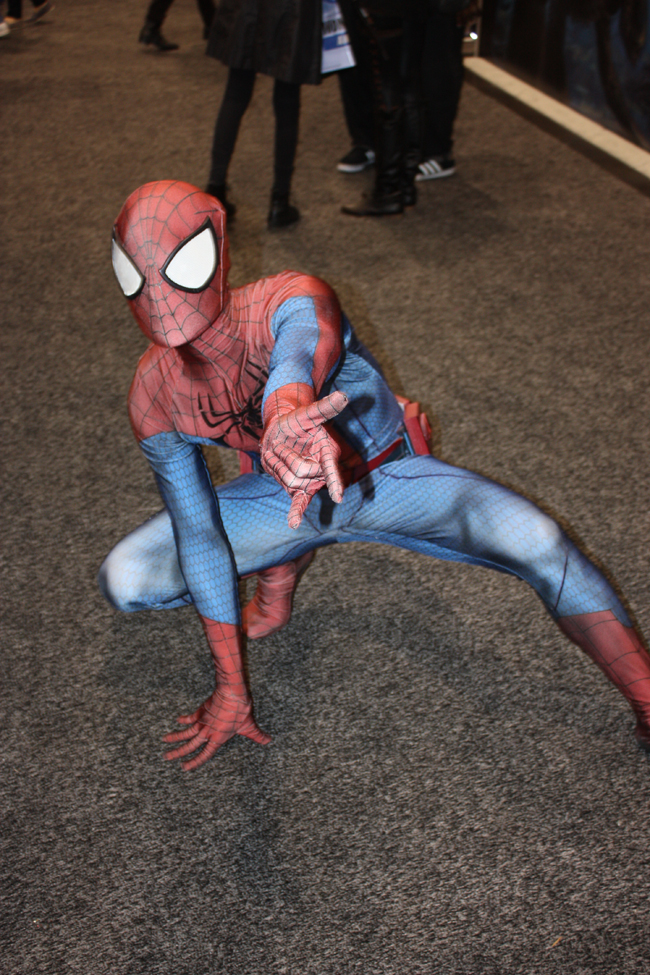 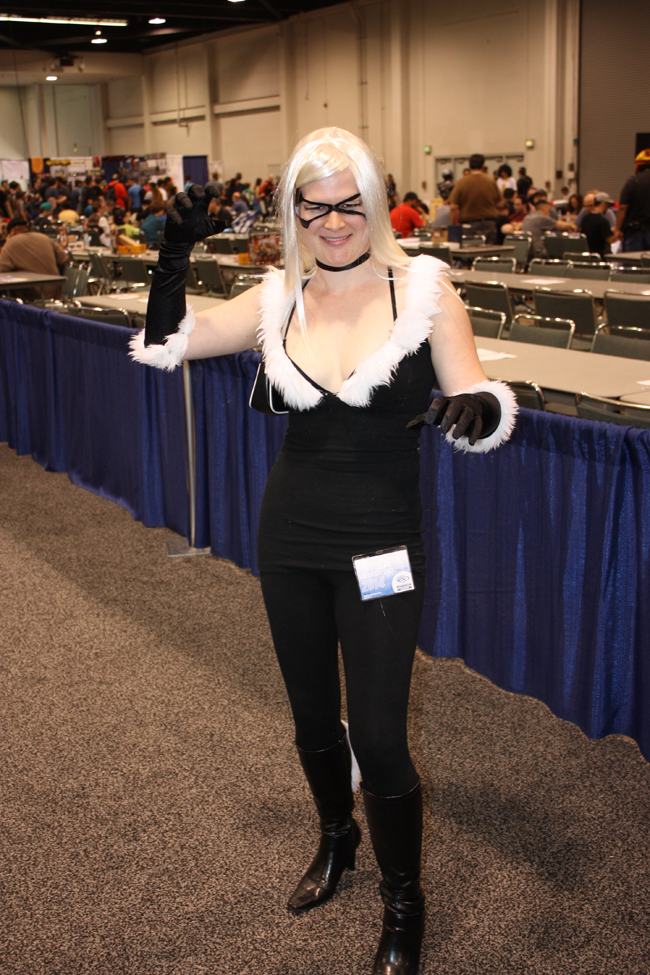 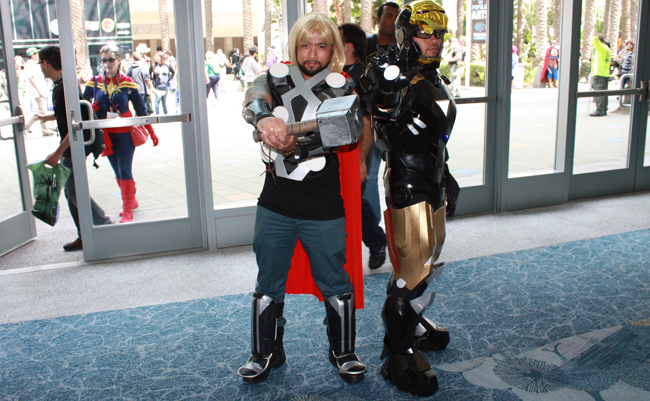 I wasn’t able to get these guys’ names as I saw this while running to a panel, but these Thor and Iron Man costumes are kind of incredible. 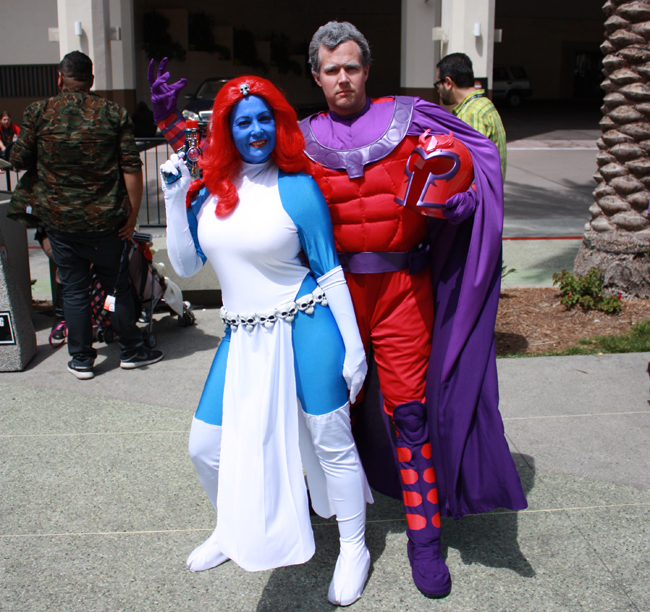 Here’s Deborah and Travis Reed as the comic book versions of Mystique and Magneto. 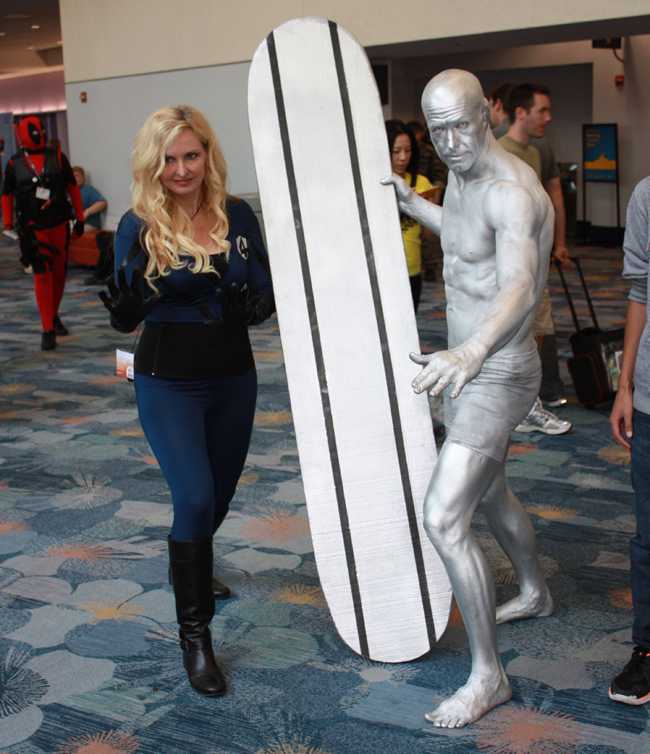 Another cosplay duo I didn’t have time to talk to, this Sue Storm and Silver Surfer are kind of incredible. Even if the Silver Surfer is clearly an actual surfer in real life and thus is in far, far better shape than you or I will ever be and thus now I feel insecure. 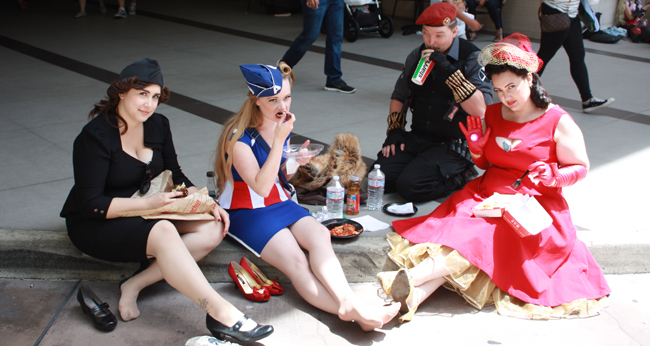 I caught The Bombshell Avengers on their lunch break, and they were nice enough to let me snap some pics. Fortunately they didn’t realize I’m in HYDRA. 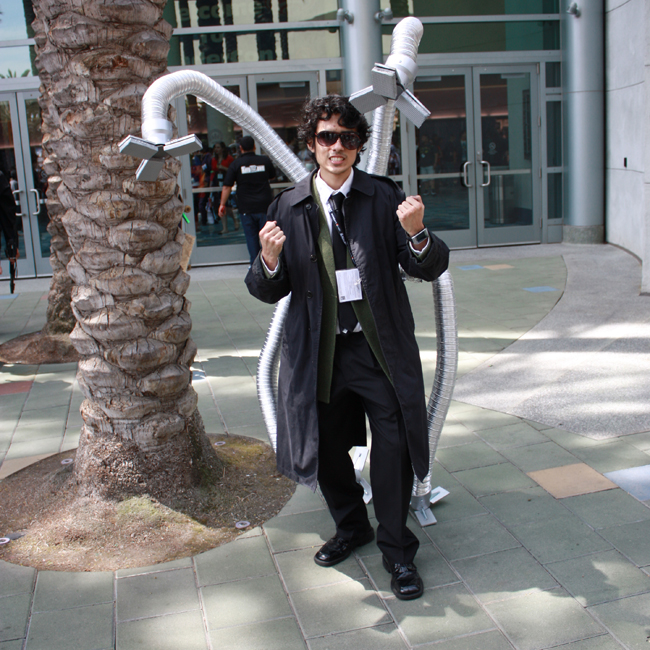 Here’s Cody as our first Doctor Octopus of the gallery. I Kind of love the old-school 60’s style tentacles. 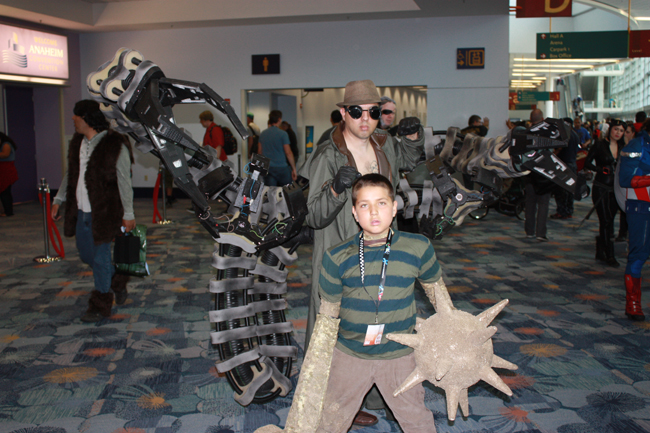 This is Angel Frost and his son – they’re a father/son cosplay duo and yes that is AWESOME -as Doctor Octopus and Sandman. Maybe the best costume I saw. Check out more of their work over on Angel’s Facebook page. 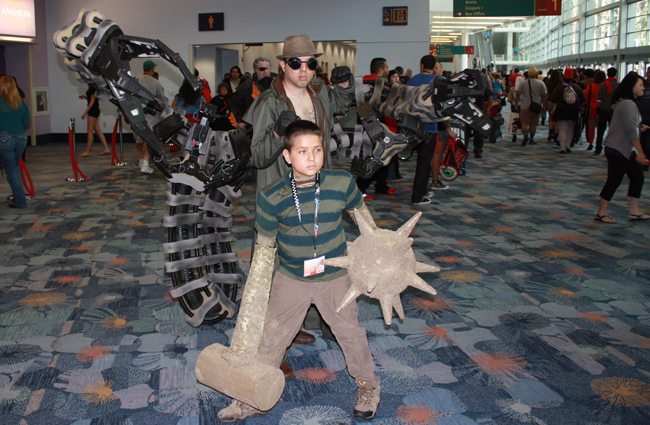 Just in case it wasn’t obvious how elaborate this recreation of the Alfred Molino Doc Ock costume is, here’s another look. 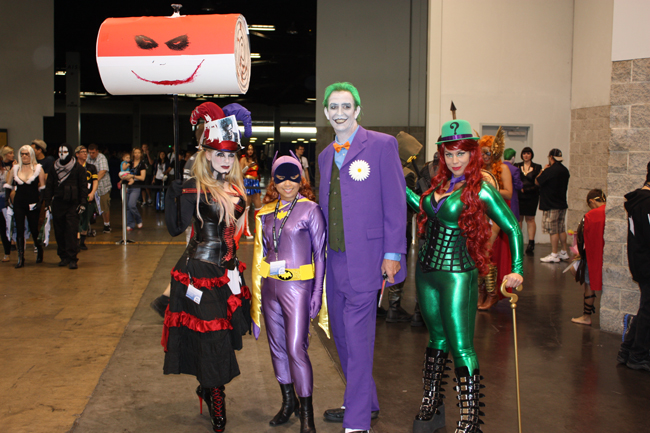 Here’s (I think) Harley Quinn, The Joker, Batgirl, and a Rule #63 Riddler. Commenters – can you identify which version of Harley that is? 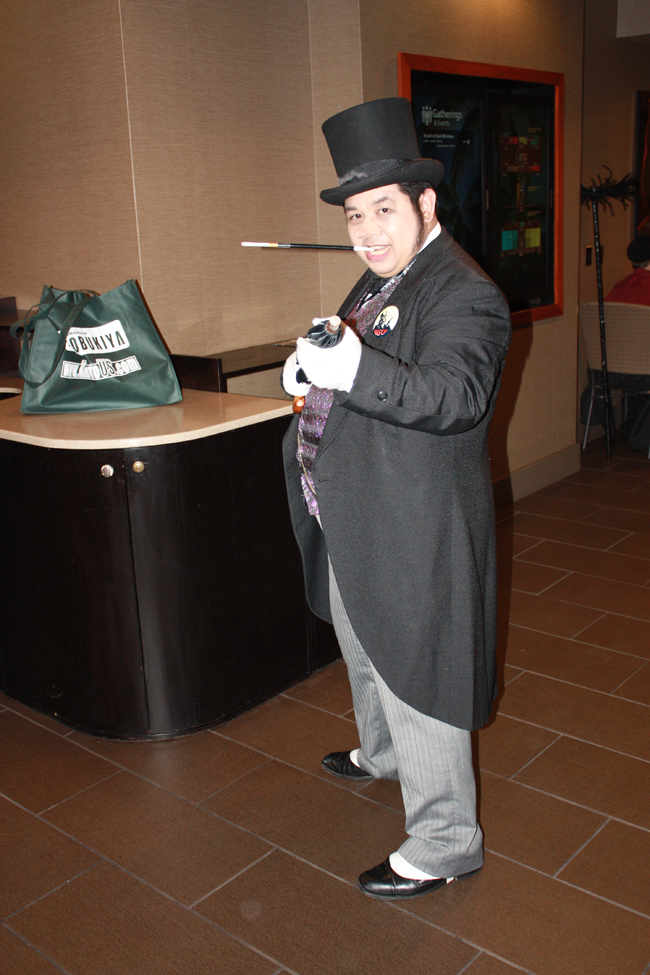 This is Eric Cajiuat as The Penguin. You can see more of his stuff on his facebook page. 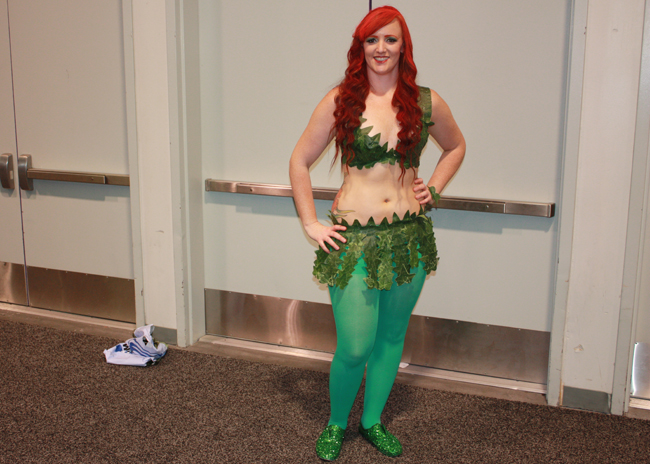 Here’s Poison Ivy in a happy mood. She knows Earth Day is next week. 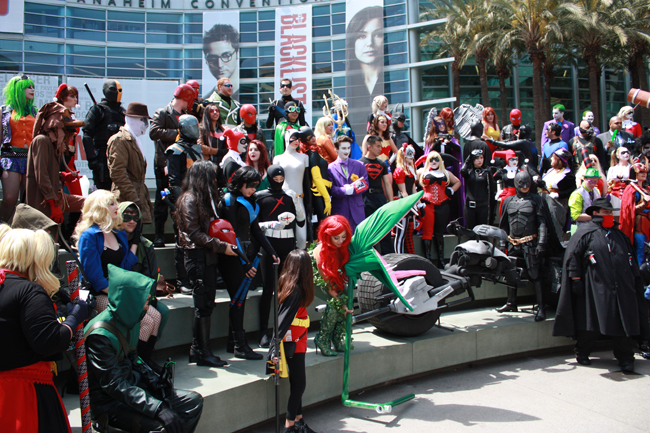 Out in the courtyard, everyone who came dressed as characters from the DC Universe congregated for a massive group photo. It’s the new 52 if it didn’t suck! 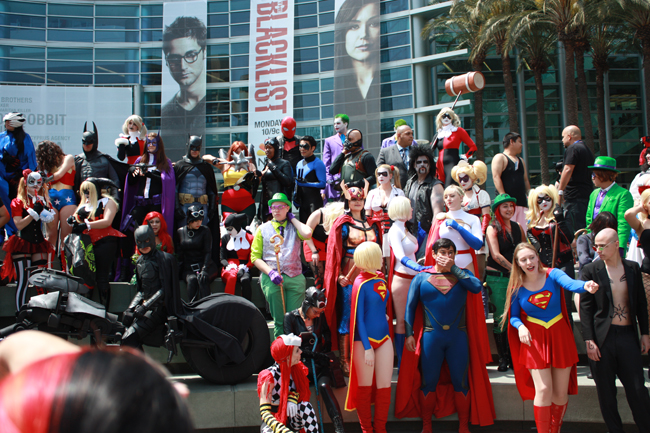 More of what feels like the whole DC Universe. 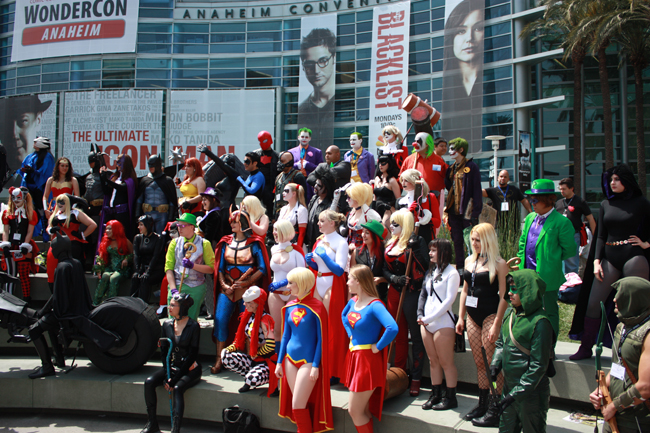 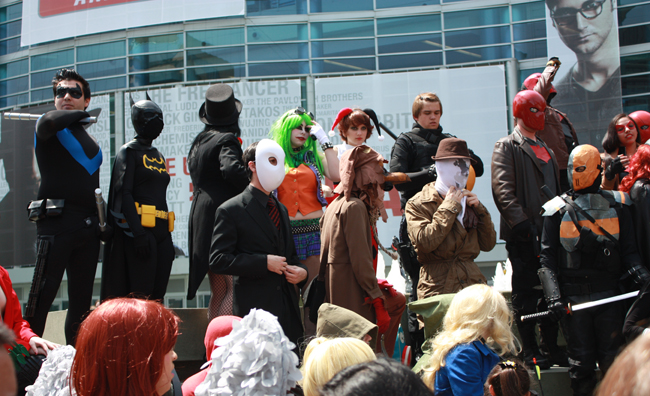 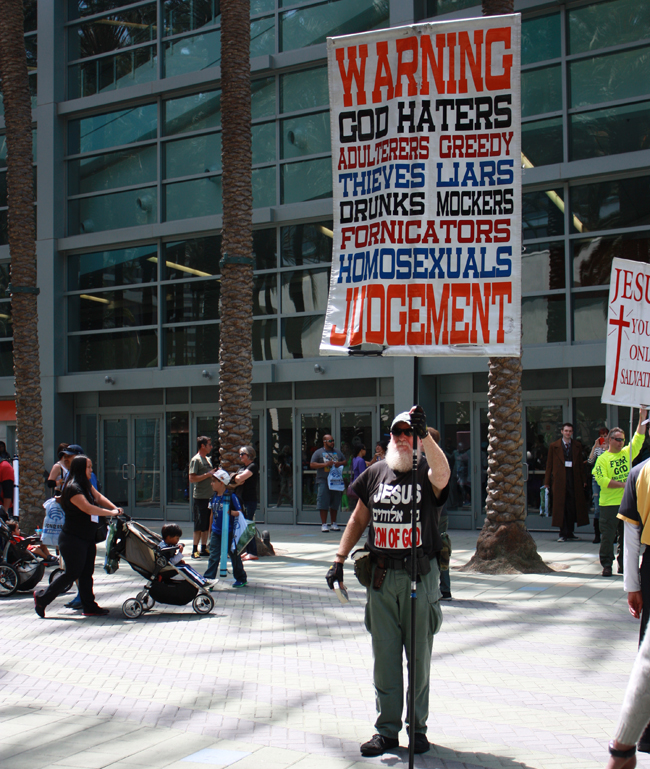 Is there a comic book called “Totally not going to have success yelling at cosplayers about religion Guy”? But seriously, I honestly don’t know why these guys picket geek conventions. 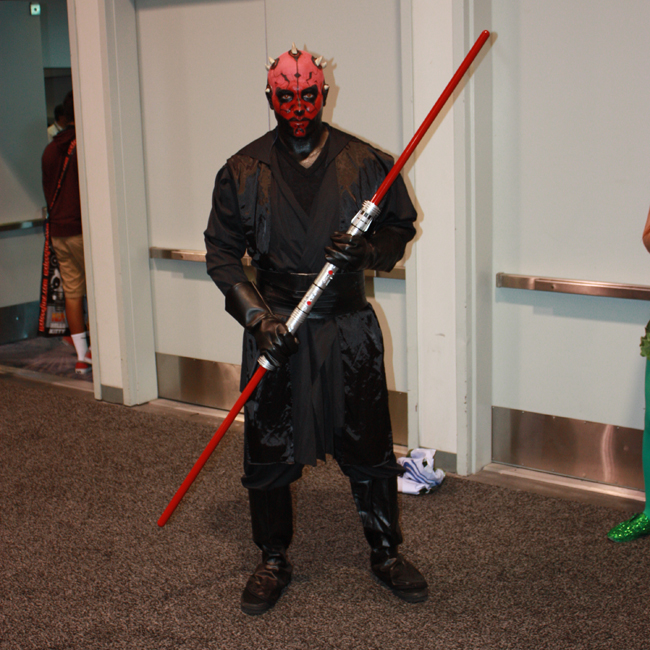 Every time I see an awesome Darth Maul costume, I’m reminded of how awful The Phantom Menace was, in part because such a cool looking villain was completely wasted. 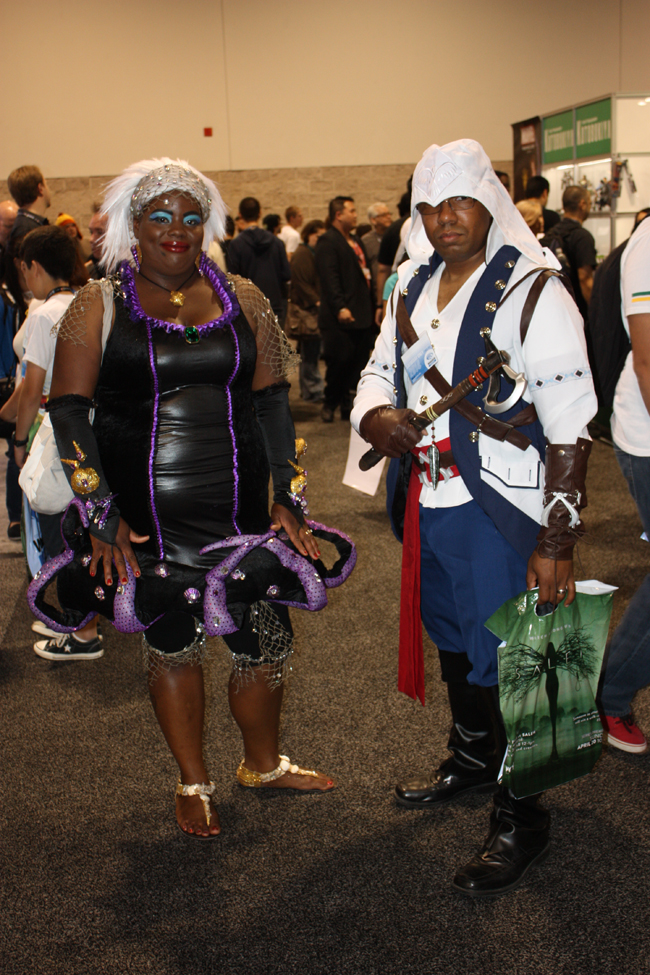 Here’s Lyonel and Amanda Vilfort as Connor Kenway and Ursula. 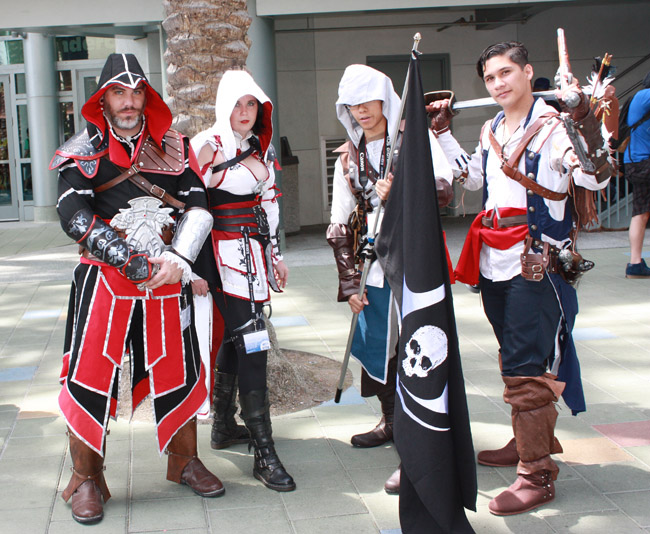 And speaking of Assassins, here are four of them. 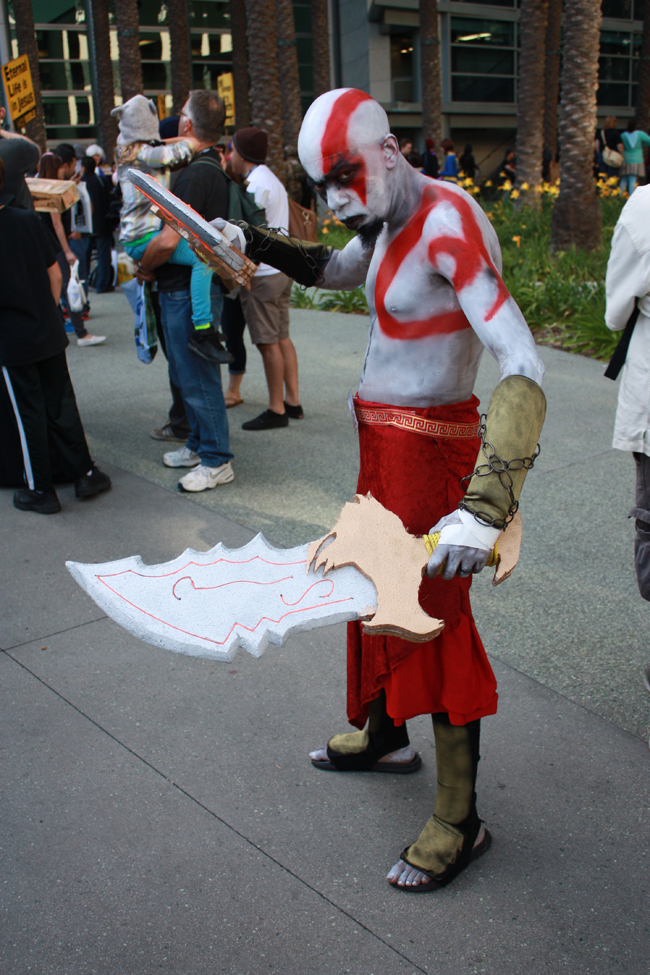 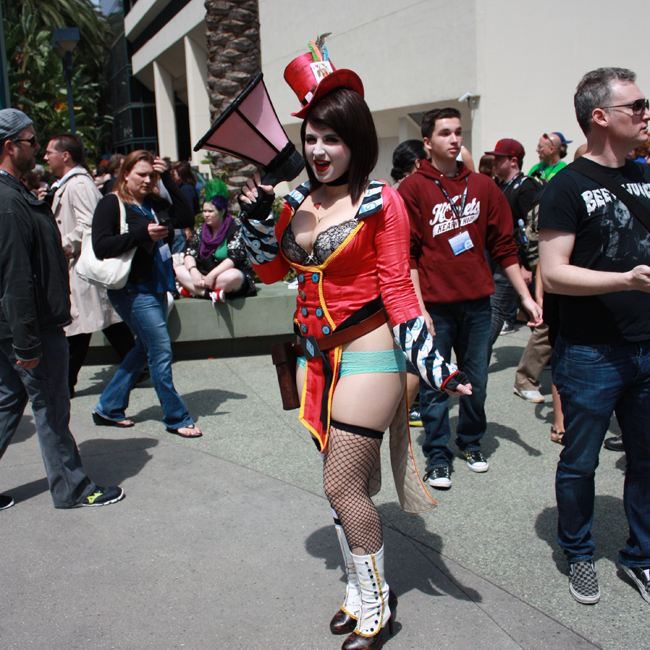 Frankly, it is impossible not to love everything about Shannah Caffey’s bustalicious Mad Moxxxie costume. You can see more of her work on Instagram. 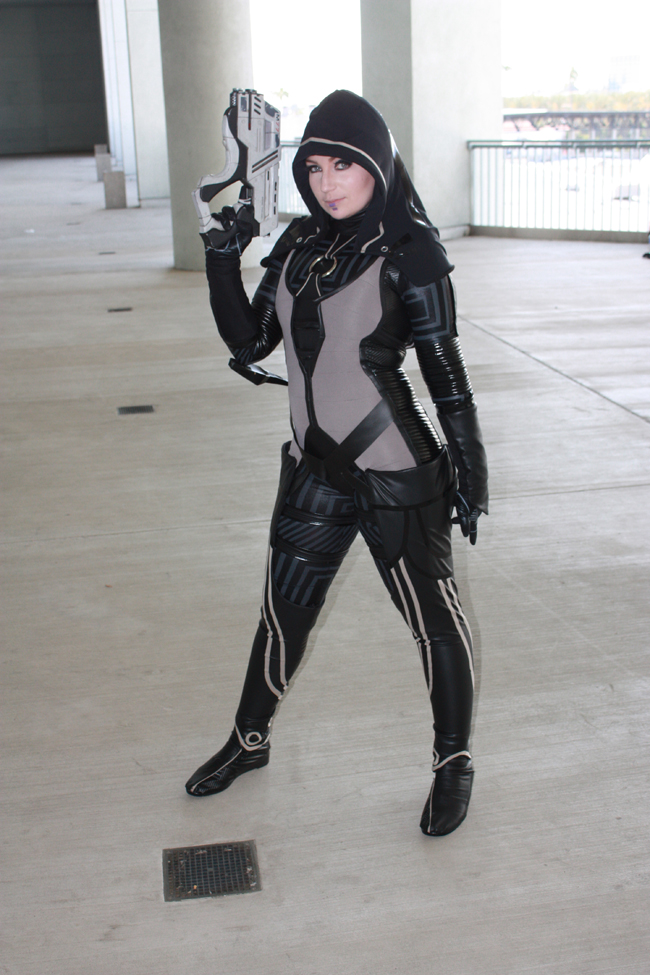 I dare you not to be impressed by this Kasumi costume created by Mel (AKA Wind of the Stars). See more of her incredible work on her official site. 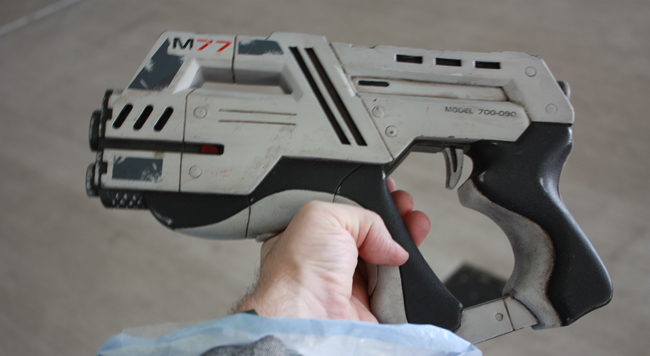 * Yes I realize that Ozymandias is actually about the inevitable fall and loss-to-obscurity of even the most powerful kings and empires. But it’s still a cool quote. 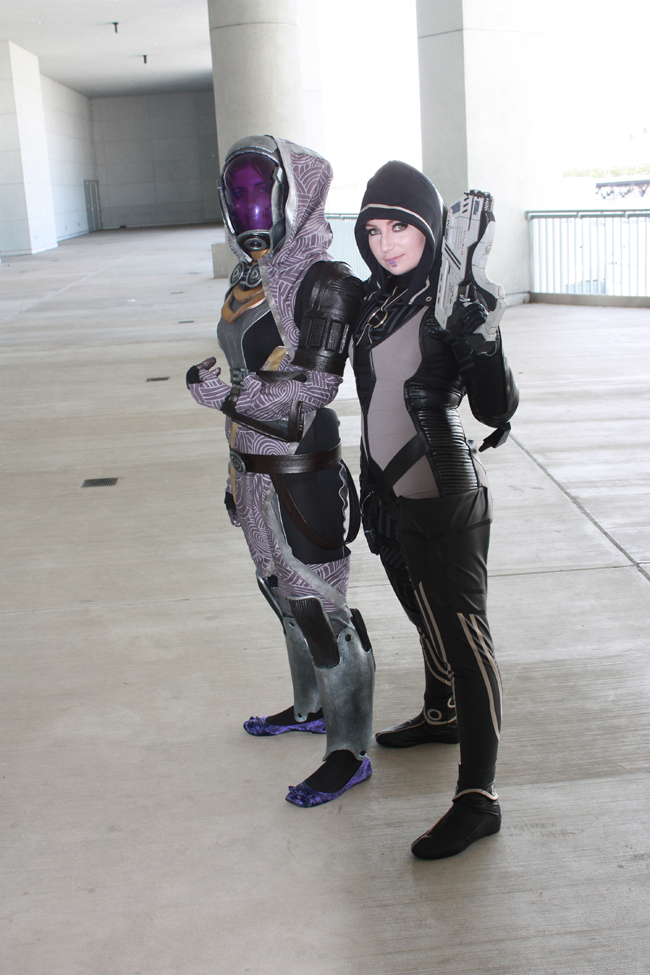 While I was photographing Wind of the Stars’ Kasumi costume, another member of the Normandy crew happened to walk by. This is San Diego-based Lizzie B, AKA Cumberpunch Cosplay as Tali. See more of her stuff here. 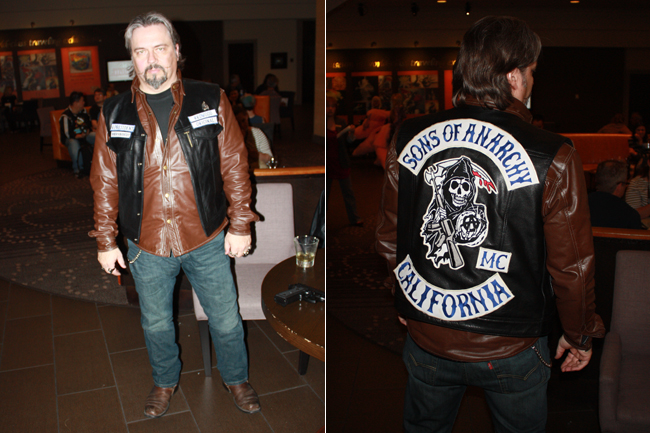 This is Don gussied up as a member of the Sons of Anarchy MC. 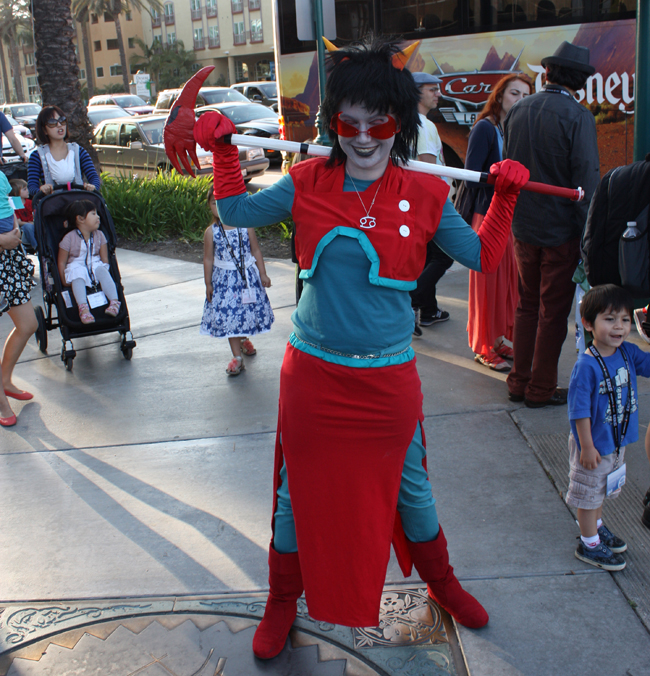 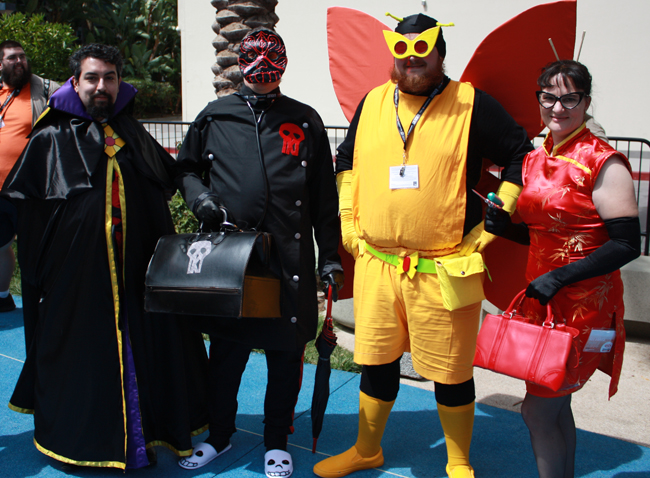 Here’s Dr. Henry Killinger, Number 21, “Doctor” Byron Orpheus and Dr. Girlfriend (from “Mid-Life Chrysalis”) reminding us how frustrating it is that we’ll have to wait until freaking 2015 before we finally get new episodes of the Venture Bros. 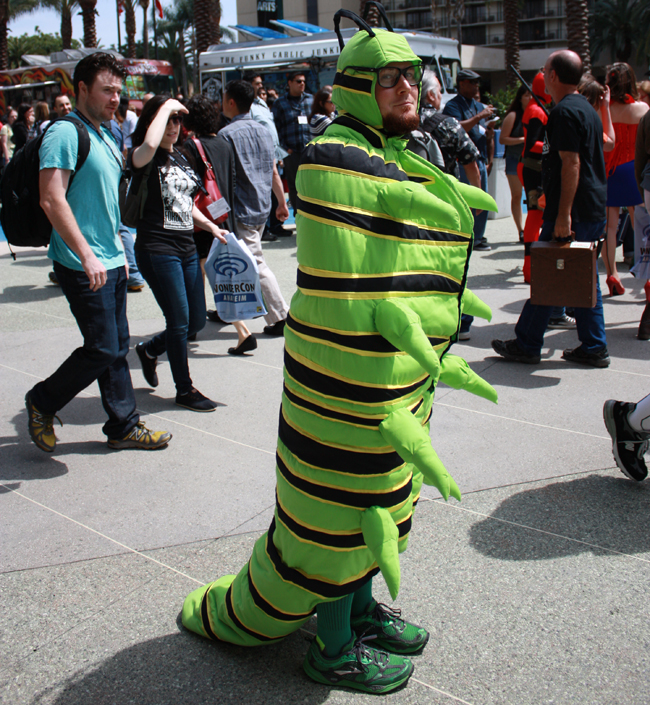 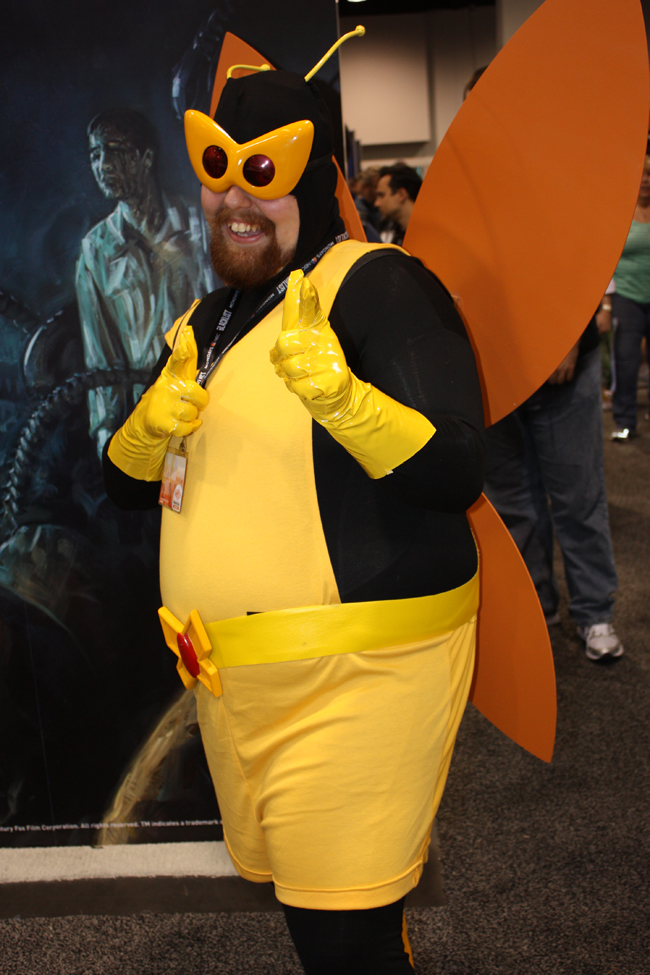 Aaand last but not least, another take on two-ton 21 by Andy weller, and an impressively authentic-looking one at that. Hench 4 life!