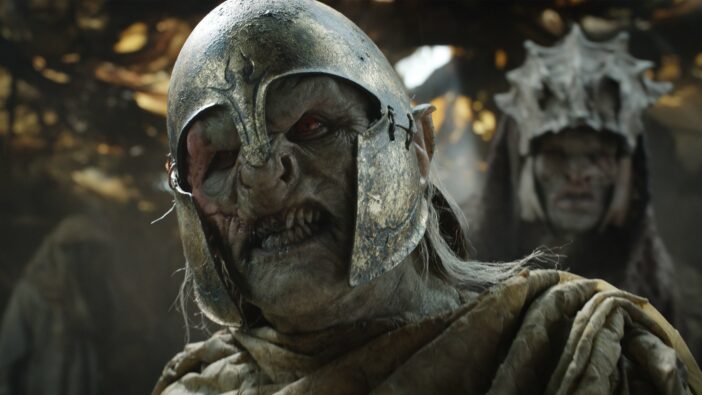 This discussion and review contains light spoilers for The Lord of the Rings: The Rings of Power episode 4, “The Great Wave,” on Amazon Prime Video.

The most surprising thing about “The Great Wave” is the extent to which it feels like old-fashioned television. Amazon needs The Rings of Power to become an era-defining phenomenon and has spent nearly three times as much money on the first season as New Line Cinema invested in the complete Lord of the Rings trilogy. The two-episode premiere felt truly cinematic, to the point that the studio even screened both episodes in theaters.

As such, it’s disappointing how conventional The Rings of Power has become just two episodes later, how its aesthetic feels closer to The Wheel of Time than House of the Dragon. To be clear, the show still looks expensive. The production design is extravagant. The costuming, makeup, and props are all impressive for a weekly television series, even in the age of blockbuster television. However, the show itself feels curiously inert.

Part of this is the direction. The first two episodes were directed by J.A. Bayona, who has considerable theatrical experience. His filmography includes the disaster film The Impossible, the fantasy A Monster Calls, and the blockbuster Jurassic World: Fallen Kingdom. Bayona’s experience with big-screen genre work was evident during the atmospheric orc attack on the family cottage in “Adrift.” Reportedly, Bayona even adjusted the shooting schedule so he could film that sequence.

In contrast, both “Adar” and “The Great Wave” are directed by Wayne Che Yip, whose primary experience is shooting for television shows. He has worked with the BBC on genre shows like Doctor Who and Class. He directed the first New Year’s Special for Doctor Who under Chris Chibnall, the culmination of the show’s journey towards a streaming television aesthetic. Yip has also developed a working relationship with Amazon by directing episodes of both The Wheel of Time and Hunters. 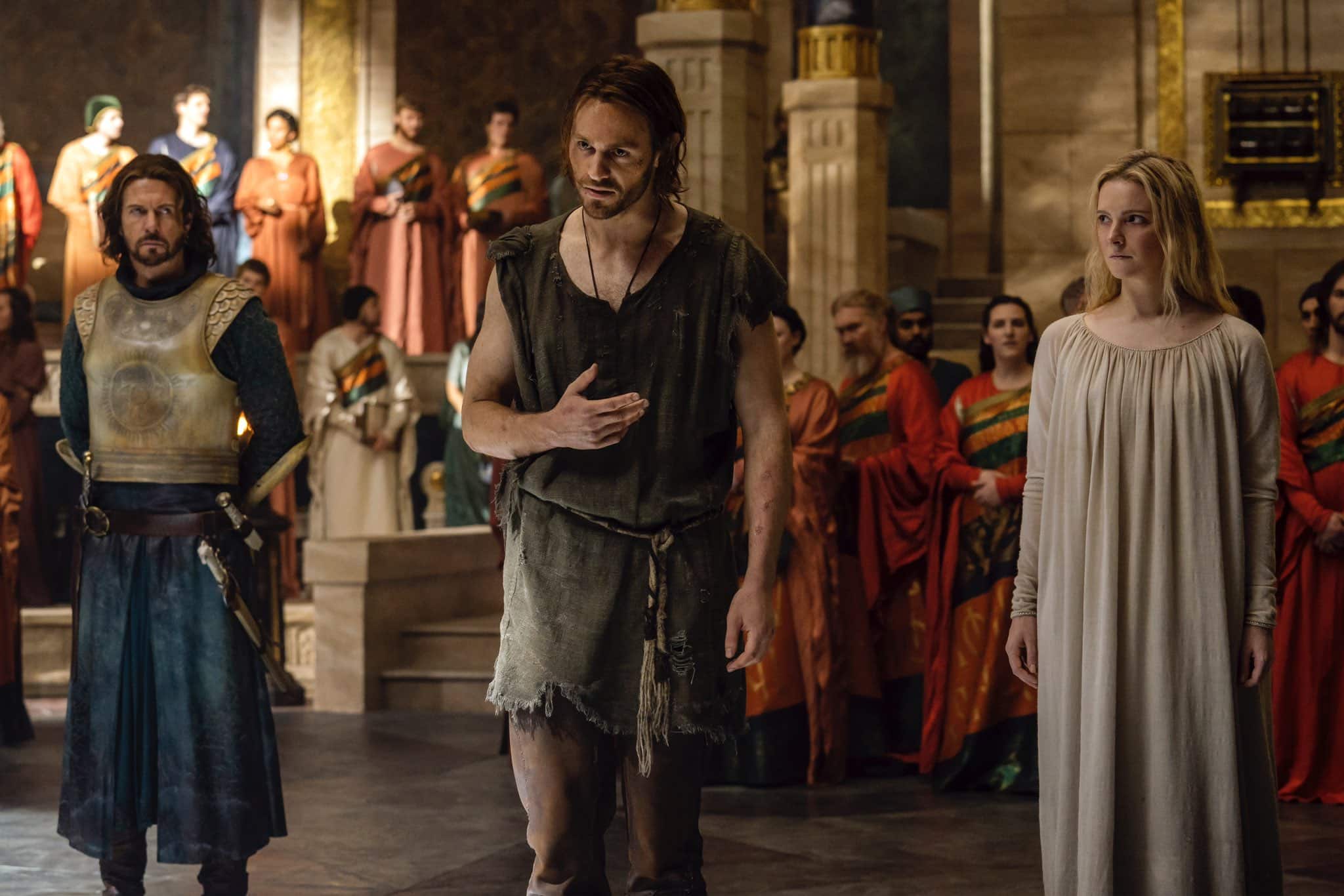 There has been a lot of discussion about the look and feel of streaming television. In particular, it has been noted that companies like Netflix can force certain choices on directors that lead to films and shows that wind up looking very generic. In “The Great Wave,” there is a strong sense that The Rings of Power is being pushed in that direction. The show is over-lit. Its colors seem washed out. While the production has built fantastic sets, the computer-generated backdrops are often unconvincing.

Yip’s framing and composition are very conventional and matter-of-fact, which makes the show look smaller than it is. It doesn’t help that both “Adar” and “The Great Wave” are moving the series in a more talky direction, as the episode is dominated by a series of extended conversations on a limited number of sets. These conversations are often clumsy and broad, heavy-handed and lacking in nuance. Yip struggles to make these sequences visually compelling in the way they need to be.

This was always going to be a challenge for The Rings of Power. A big selling point for the show is the backing of the Tolkien estate. However, the Tolkien estate has also been candid in sharing its opinion of Peter Jackson’s cinematic trilogy. “The commercialization has reduced the aesthetic and philosophical impact of the creation to nothing,” complained Christopher Tolkien, son of the author. “There is only one solution for me: to turn my head away.”

There is a sense in which the Tolkien estate’s preferred version of The Rings of Power would be characters monologuing at one another, with reports that the Tolkien estate was part of the reason that Jackson was not involved in the series. As such, the two-episode premiere may have been misleading. It opened with an impressive action sequence in which Galadriel (Morfydd Clark) took down a gigantic troll. It culminated with an orc intrusion into Bronwyn’s (Nazanin Boniadi) home. 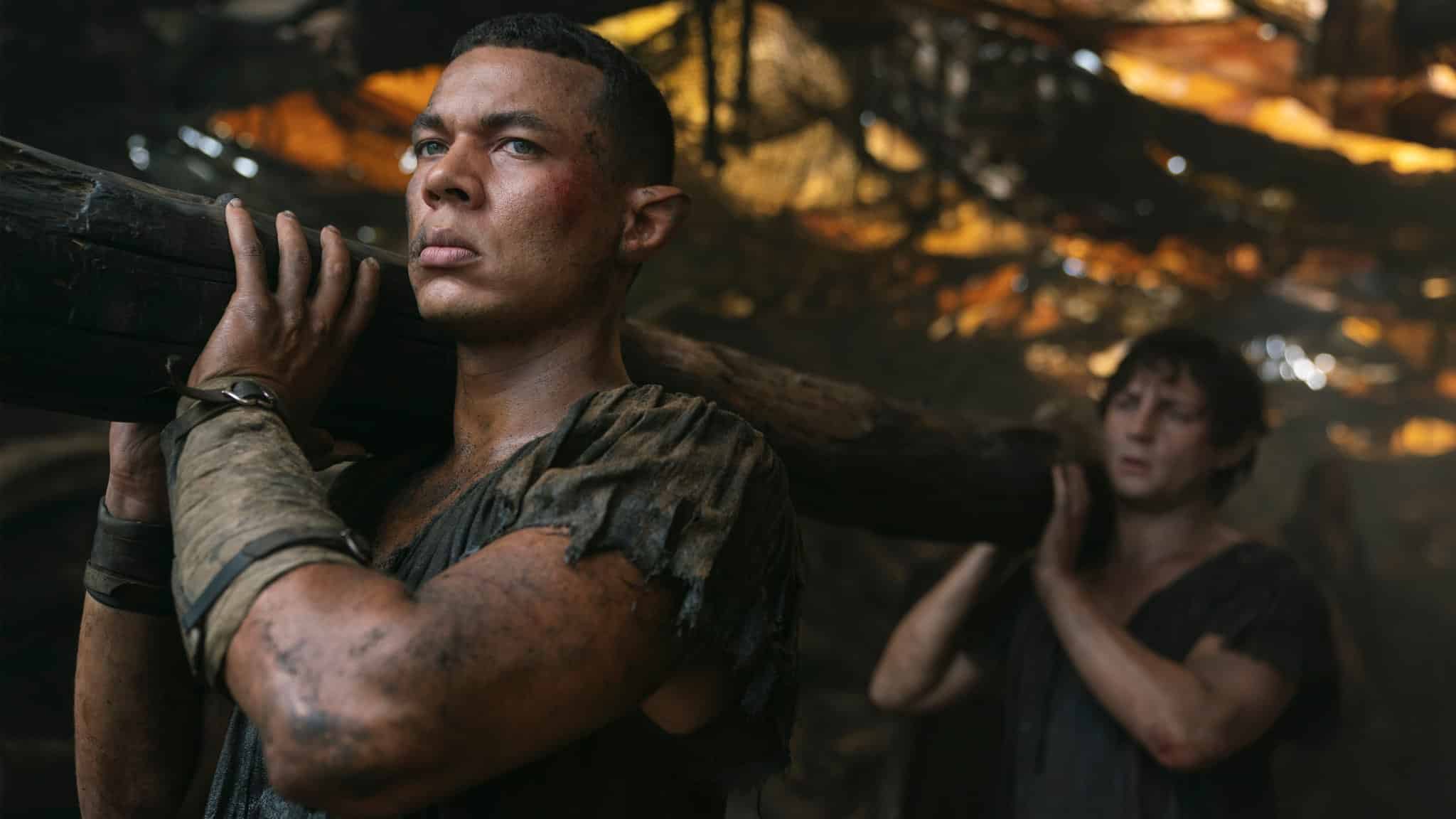 There are fewer impressive set pieces in “The Great Wave,” but they demonstrate the difference between Bayona and Yip’s directorial styles. “The Great Wave” features another sequence of Theo (Tyroe Muhafidin) evading orcs in the village, even including a technically impressive single-take shot. However, it is nowhere near as effective or compelling as Bayona’s horror movie direction, which captures some of the unique energy that Jackson brought to the feature films.

Towards the climax of “The Great Wave,” Yip makes a push for a cinematic aesthetic as the orcs chase Arondir (Ismael Cruz Córdova) through the forest. However, this just feels like an unconvincing imitation of Jackson’s work on The Lord of the Rings: an establishing helicopter shot of the forest cutting to slow-motion footage of the characters running as the choir builds in the background. It’s a reminder of similar and better sequences that the audience has seen before.

To be fair, even accepting that The Rings of Power is going to be more dialogue- and monologue-driven than the premiere suggested, it should be possible to make this visually compelling. While House of the Dragon is ostensibly about a looming civil war with at least 17 dragons, a lot of this first season has consisted of characters sitting (or standing) around talking to one another. A recurring theme on the show is the characters’ frustrations at the lack of action around them.

This gets at one of the big blind spots for The Rings of Power. It has a weak cast. There are a few notable performers in the ensemble, like Lenny Henry, Peter Mullan, and Charles Edwards, but Clark is really the show’s only bona fides star. To be clear, Clark is more than carrying her weight on The Rings of Power. The best parts of the show are those that give her material into which she might sink her teeth, such as her confrontation with Queen Regent Míriel (Cynthia Addai-Robinson). 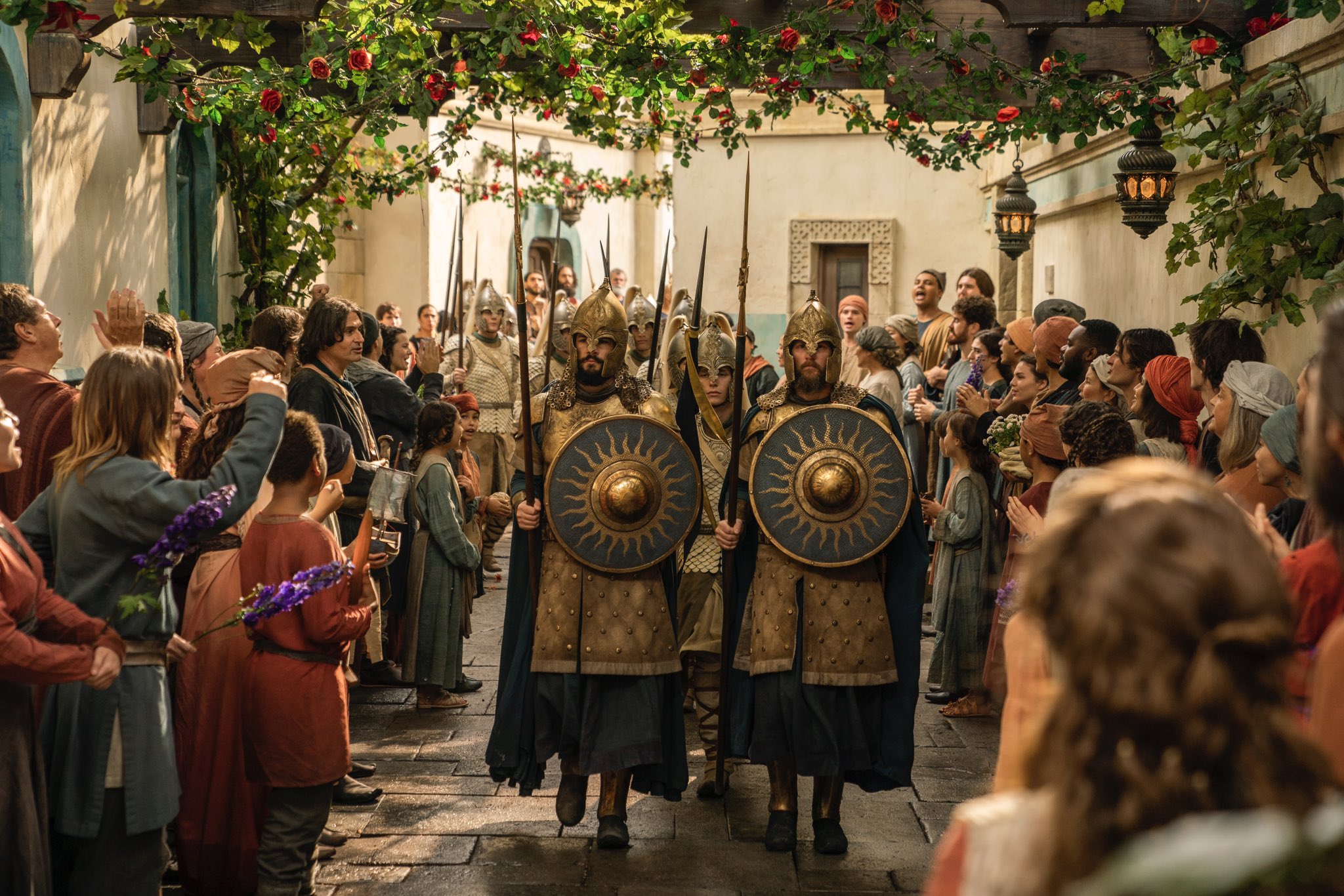 It’s worth comparing the cast of The Rings of Power to something like House of the Dragon. That show is stacked with some of the best British actors of its generation: Paddy Considine, Matt Smith, Olivia Cooke, and Rhys Ifans. It has enough canniness to cast actors like Sonoya Mizuno and Graham McTavish in as-yet-thankless roles. It would be interesting to watch those actors have lunch, let alone plot and scheme around one another.

The status of The Rings of Power as a one-woman show dependent on Morfydd Clark is another point of comparison to Amazon’s previous attempt at a big fantasy series, The Wheel of Time. That show leaned heavily on Rosamund Pike. Even then, Pike could at least rely on a recurring cast that included Sophie Okonedo, Michael McElhatton, and Abdul Salis. It’s weird to think of The Wheel of Time as a blueprint for this, given how curiously outdated it felt on release.

Part of the problem is also the fact that the conversations driving the show aren’t especially compelling. There is a recurring preoccupation with (emotionally, intellectually, and physically) absent fathers in “The Great Wave,” but nothing that coheres into compelling drama. The most emotionally affecting scene in the episode has no dialogue at all, as the dwarven women sing their prayers to the caves holding their fallen brethren. It’s a powerful moment, all the more effective for just letting the show be in that moment.

Indeed, The Rings of Power feels structured like a curiously old-fashioned television show. It’s interesting to note how much of the series leans on mystery boxes, despite the fact that it’s a prequel to a story that everybody knows. There’s a strong sense that the production team is desperate to keep viewers watching and doesn’t necessarily trust the characters or the drama to do that on their own. As a result, there are a lot of narrative games being played. 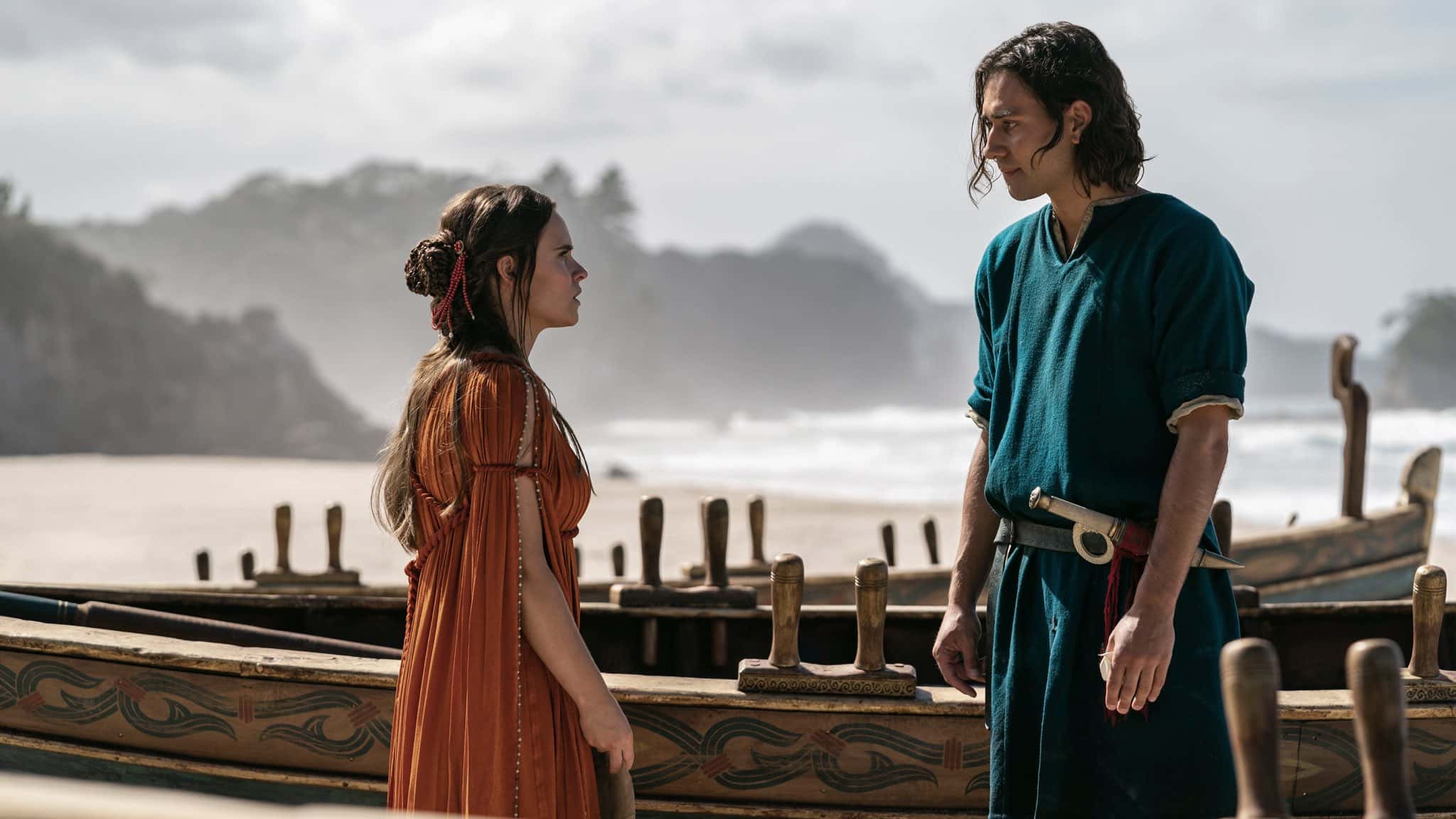 The cliffhanger of the premiere set up a mystery over the identity of the stranger (Daniel Weyman) who fell from the sky. The “previously on” section from “The Great Wave” replays Watchwarden Revion’s (Simon Merrells) observation that “Sauron was said to have many names in days of old,” setting up a mid-to-long-term “find the dark lord” shell game to keep viewers guessing. “The Great Wave” does at least reveal what was in Durin VI’s (Owain Arthur) literal mystery box: mithril.

It feels clumsy to lean so heavily into these mystery boxes so early, rather than trusting the audience to invest in these worlds or these characters. Again, The Rings of Power seems closer to The Wheel of Time than to House of the Dragon. The first season of The Wheel of Tower was built around a similar “one of these characters is the dark one” mystery box, while House of the Dragon is built around the much more dramatically compelling question of who will rule the show’s kingdom.

It doesn’t help that there is a shagginess to the writing of The Rings of Power. How much time has passed in these four episodes? In “Adrift,” Celebrimbor (Charles Edwards) revealed plans for a tower, but in “The Great Wave” it is about half-complete. That seems like a long time. However, that same period of time covers Galadriel’s trip to Númenór and Bronwyn leading the refugees to the tower, which feel like events that take place over a much more compressed timeframe.

Showrunner J.D. Payne told Vanity Fair that the show’s timeline would be shortened compared to the source material. “Look, there might be some fans who want us to do a documentary of Middle-earth, but we’re going to tell one story that unites all these things,” he argued. This is fair and reasonable, but it is hard to make sense of the internal world of The Rings of Power. This is a problem, given that the central appeal of the show is getting to live in that world.

To pick an example, “A Shadow of the Past” confirmed that the elves were in the midst of a withdrawal from Middle-earth, but how has Lindon not noticed the loss of communications with their troops in the Southlands in all the time it has taken to negotiate a deal with the dwarves to build Celebrimbor’s forge? The orc rampage in the Southlands evokes similar events in The Two Towers, but Middle-earth was already well entrenched in the War of the Ring by that point.

Taken on their own, none of these are fatal errors or brutal criticisms. However, collectively, they suggest some very fundamental weaknesses with The Rings of Power. It is a show that feels much smaller than it did even two weeks ago, much more like generic fantasy television. Ironically, with “The Great Wave,” The Rings of Power feels like more of a ripple in the modern television landscape.