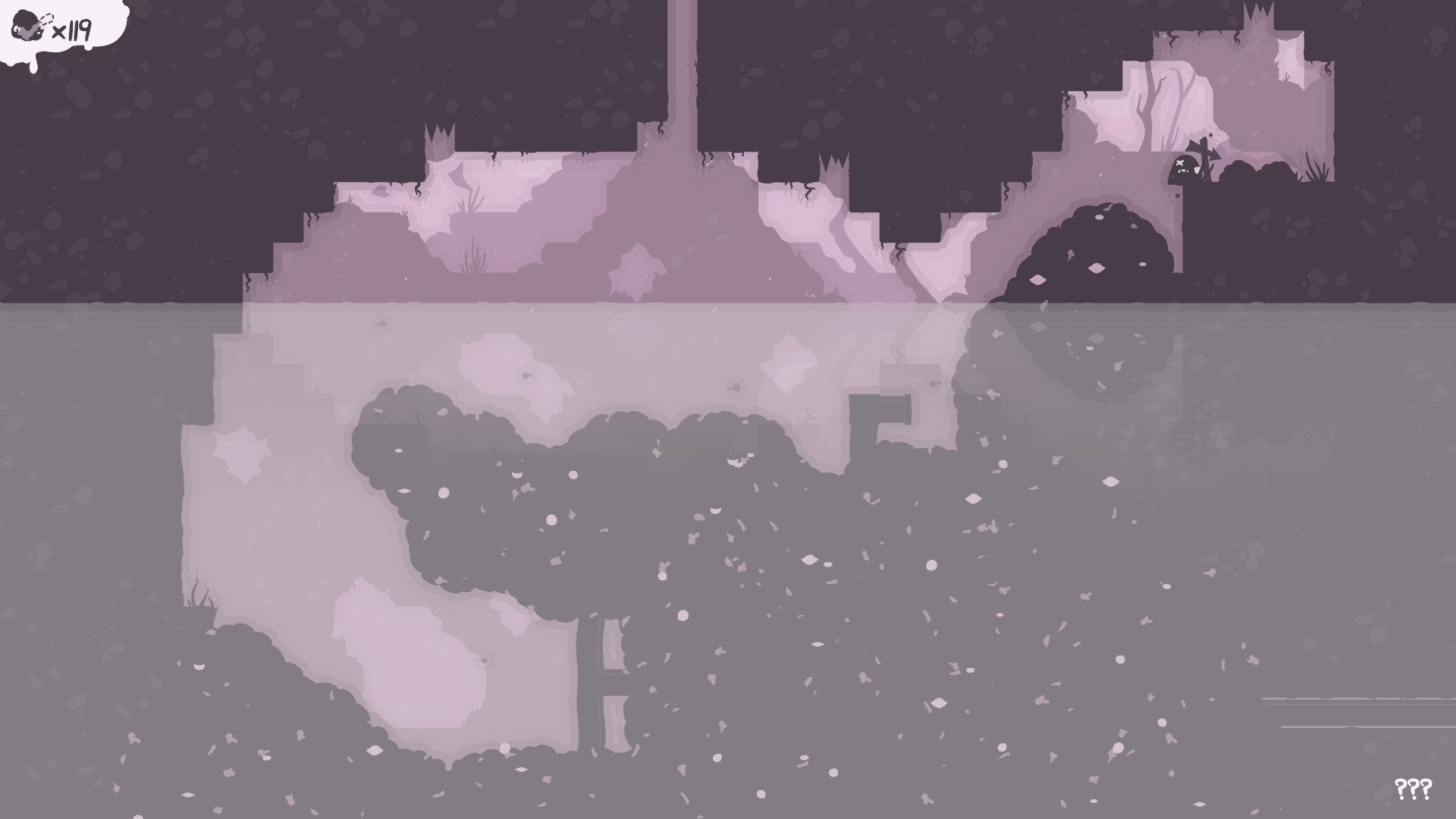 The diabolical Retrograde is a creepy area filled with ruined buildings and mutant overgrowth. Stay alive, and get help finding all the Tumors, Mega Tumors, and Cart collectibles with this 100% guide.

The main feature of the Retrograde is the killer mutation that grows in size whenever you get close. Avoiding this biological nightmare is your main unique challenge, but you can always leave and check out one of the other two locations available from the Split.

After completing the Overflow area, you’ll enter the Split. This isn’t really an “area” so much as it’s a crossroads. From there, you can go to the Wall of Sorrow, the Retrograde, or the Hollows. It’s all up to you, but we’re starting with Retrograde.

There are 15 Tumors, 5 Mega Tumors, and 1 Cartridge in the Retrograde — for a total of 40 Tumors if you collect them all.

Cartridge #4: Retrograde 12 – Drop through the opening in the lower-left corner of the screen, where the strange growth doesn’t touch.

Secret #1: Retrograde 2 – Drop into the narrow hole in the bottom-left corner of the screen.

Secret #2: Retrograde 5 – Jump up and into the hole in the top-center of the screen. Use the falling platforms to climb up and reach the opening.

Secret #3: Retrograde 9 – Break the whole tower of crumbling blocks to reveal a weak floor. Buttstomp the cracked floor to find the secret path.

Secret #4: Retrograde 13 – Land on the second bottom block to lower the wall to the tumor / secret path in the lower left.

Secret #5: Retrograde 15 – Through they key door, which is easily visible right before the end of the level.

Retrograde 1: To reach the floating tumor, enter Retrograde 2 and jump onto the handholds when the large moving pillar on the right moves to the left, letting you climb the handholds and jump left.

Retrograde 2: Floats in the upper-center of the level. Slip under the first pillar and climb the handholds quickly to reach it before you’re squished.

Retrograde 3: Start from the ending and backtrack to the handhold at the top of the shaft of spikes. Hanging from it will drop the tumor below — drop back down through the shaft to get it.

Retrograde 4: Use the handholds on the left to climb up and jump right to collect the tumor floating between two spike blocks.

Retrograde 5: Ride the center floating platforms and jump up to grab this tumor near the spiked ceiling.

Retrograde 6: Floats up from the bottom and continues up and out of the level. To get it, quickly hop across the single crumbling blocks on the left.

Retrograde 7: Another tricky one. It will float up near the fourth crumbling block. Reach the handhold, only jumping on the first, third, and fifth crumbling blocks. Hold on until you see the tumor, then jump to the fourth and back across to the second blocks to exit.

Retrograde 8: Stay low and reach the right-most falling crumbling blocks, then jump up from there to grab the tumor that floats toward the bottom of the screen.

Retrograde 9: Inside the dangerous enemy-filled passage beneath the exit.

Retrograde 10: Moves in a square right next to the shooter. Just wait and hop to avoid projectiles until the shooter and the tumor are far enough apart.

Retrograde 11: Trigger the falling pillar in the center of the screen to make a second shooter appear. The tumor is floating beneath the second shooter.

Retrograde 12: Very tricky. Found beneath the level exit. Start from the right side, and drop down — try to synchronize the shooters to make dodging a little easier.

Retrograde 13: Jump on the second block in the floor-gunk and avoid the thing until the wall lowers. Leads to the tumor and a secret path.

Retrograde 14: On the lower-left corner of the second building.

Retrograde 15: Very tricky. In the lower-right corner of the strange substance. Jump across the blocks to grab it then retreat to the starting point.