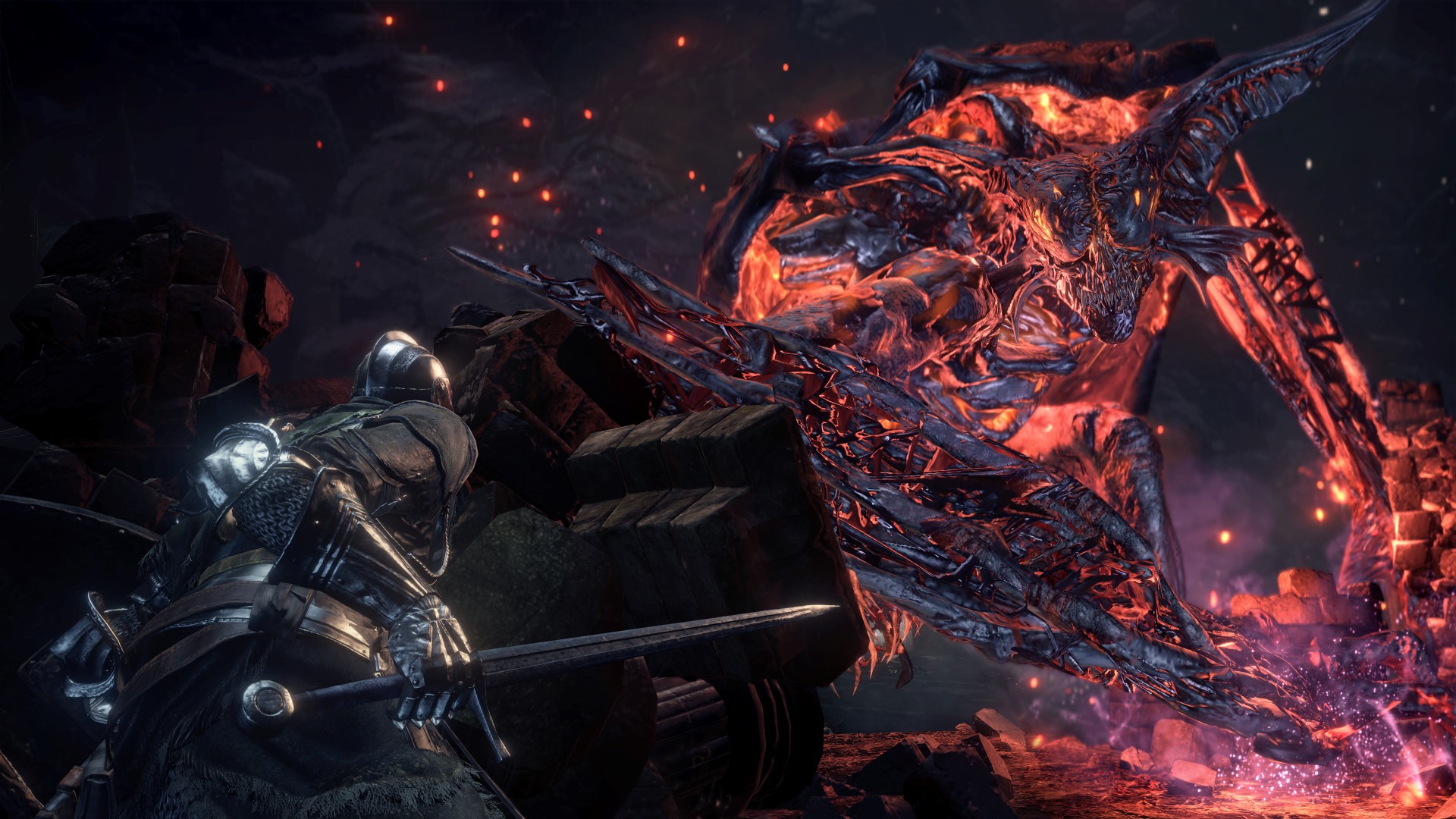 Bosses in Dark Souls 3 are tough. The Ringed City is even tougher. The final DLC features four over-the-top challenges, culminating in one of the hardest battles in the series. Get some tips with our boss guides here, without any of that “git gud” stuff.

There are three bosses in The Ringed City that surpass almost every other Dark Souls boss in difficulty. That means there’s only one “breather” battle, and even that’s a challenge. Here, we’re going to break down each fight, explain what moves to look out for, and when you’ll want to attack.

You’ll also find one optional boss. It isn’t required to make progress, but if you want to experience everything this DLC has to offer, it is worth checking out. Instead of explaining how to win, you’ll find instructions to uncover its secret arena. Hidden doors are involved.

Need help navigating The Ringed City DLC? Go on a tour of the DLC with our complete step-by-step walkthrough.

How to Beat Every Boss | Battle Strategies Guide

A pair of demons attack just after the Undead Champion drops from the [Within the Earthen Peak Ruins] bonfire. Despite the names, the demons are identical.

They alternate between melee attacks and ranged poison sprays. While spraying poison, the individual demon remains stationary, making them a good target to attack – if you have enough space.

Both demons will periodically charge up, exploding into a lengthy combo of attacks that ends with ground-pound. Watch out for the charge, and then attack when they’re temporarily stunned following the attack cycle. You’ll see the glow dissipate when the demon is stunned. 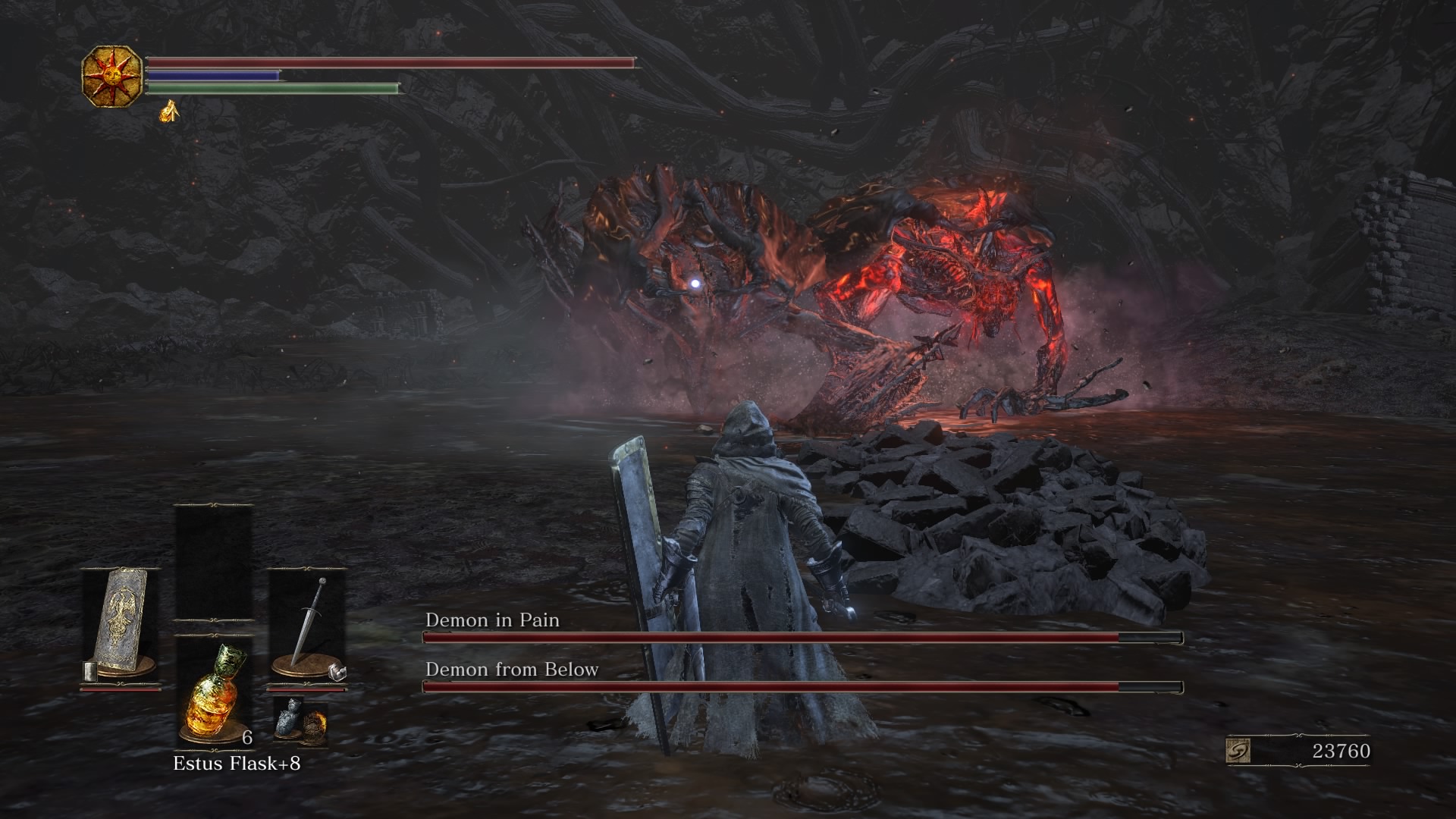 Demon in Pain / from Below Attacks:

When one of the demons is killed, the other will gain a permanent red-glowing upgrade. They aren’t much different, just more aggressive in melee combat. The true battle doesn’t begin until both are dead, and the Demon Prince reveals himself.

Alone, the pair of demons aren’t much more difficult than any regular tough enemy. Stay close to their legs and roll toward the tail to attack while they attempt a series of combos. They turn very slowly, and when they commit to a series of attacks, they’re completely open to attack from behind. 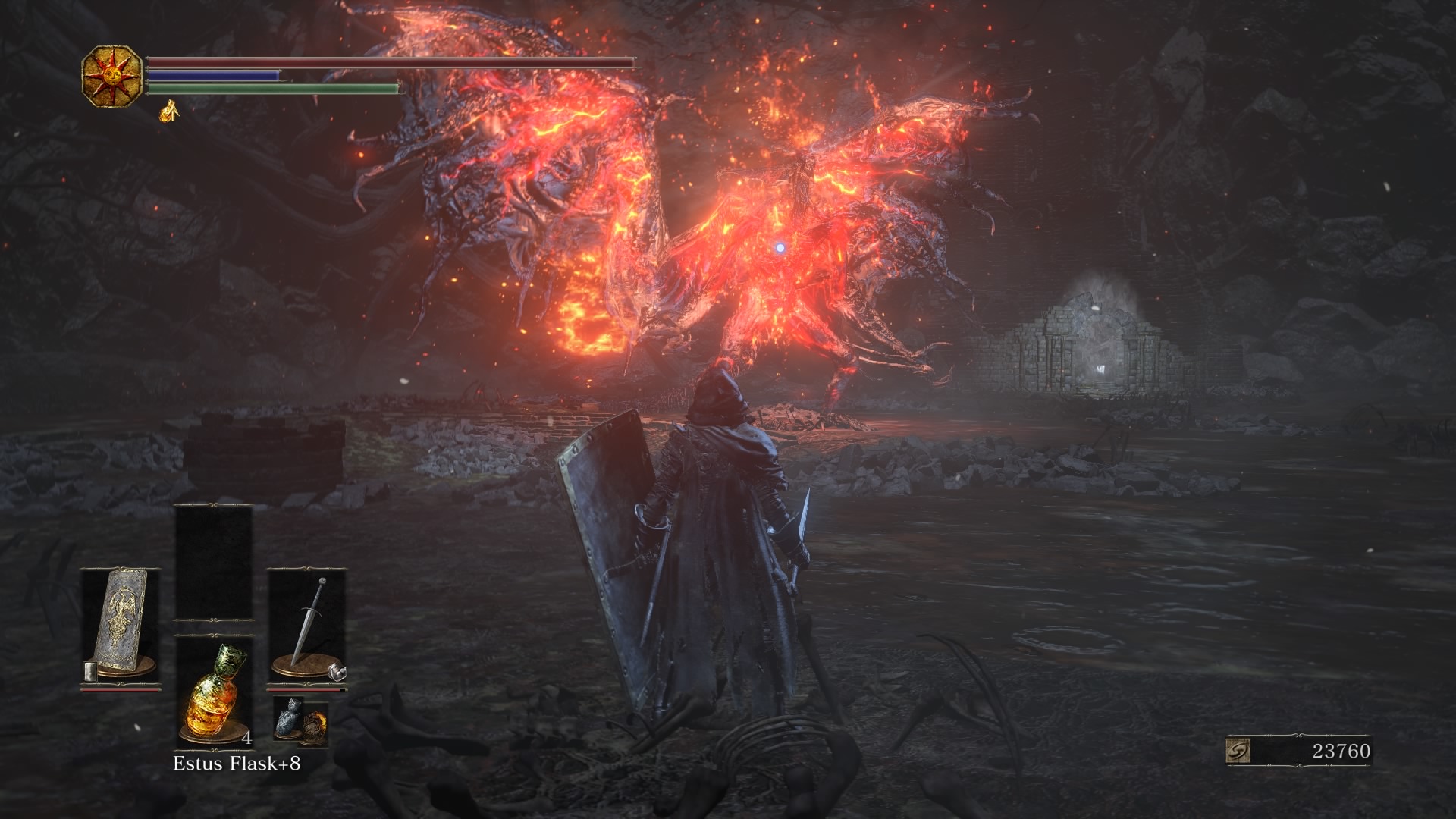 The Demon Prince is an instantly intimidating enemy. It likes summoning off-screen fireball projectiles, and it moves surprisingly fast. There are two good, safe windows to get in some offense.

When the Demon Prince flies up into the air, it will either ground-pound, retreat, or swoop forward. If the Demon Prince swoops forward, dodge and attack it while it is temporarily stunned by the landing.

If the Demon Prince retreats, it will shoot fire into the air and summon an endless stream of fireball attacks from the sky. Wait for the beam attack — that one is slow enough to dodge as long as you dash to the side – charge the Demon Prince and get in a few attacks before it can recover.

On all forms of the demon boss, attacks to the head have a chance of stunning. Do enough damage to the head, and you’ll be able to get in a powerful blow. This is especially easy to get when the Demon Prince unleashes that sustained beam of fire.

Most of the Demon Prince’s deadliest attacks only occur when the player isn’t aggressive. If you stay at mid-range or long-range, the Demon Prince summons endless fireballs or launches that meteorite area-of-effect. If you’re fast and ready to punish the Demon Prince between attacks, it won’t have time to unleash those killer magic spells.

The best time to attack it is during the sustained beam, or when it summons a pair of fire balls. Wait for it to retreat, then wait at mid-range, directly in front of the creature until it attempts a magic attack. Once it commits, sprint ahead and attack – if you can attack the head, that’s makes a huge difference.

BOSS: Halflight, Spear of the Church 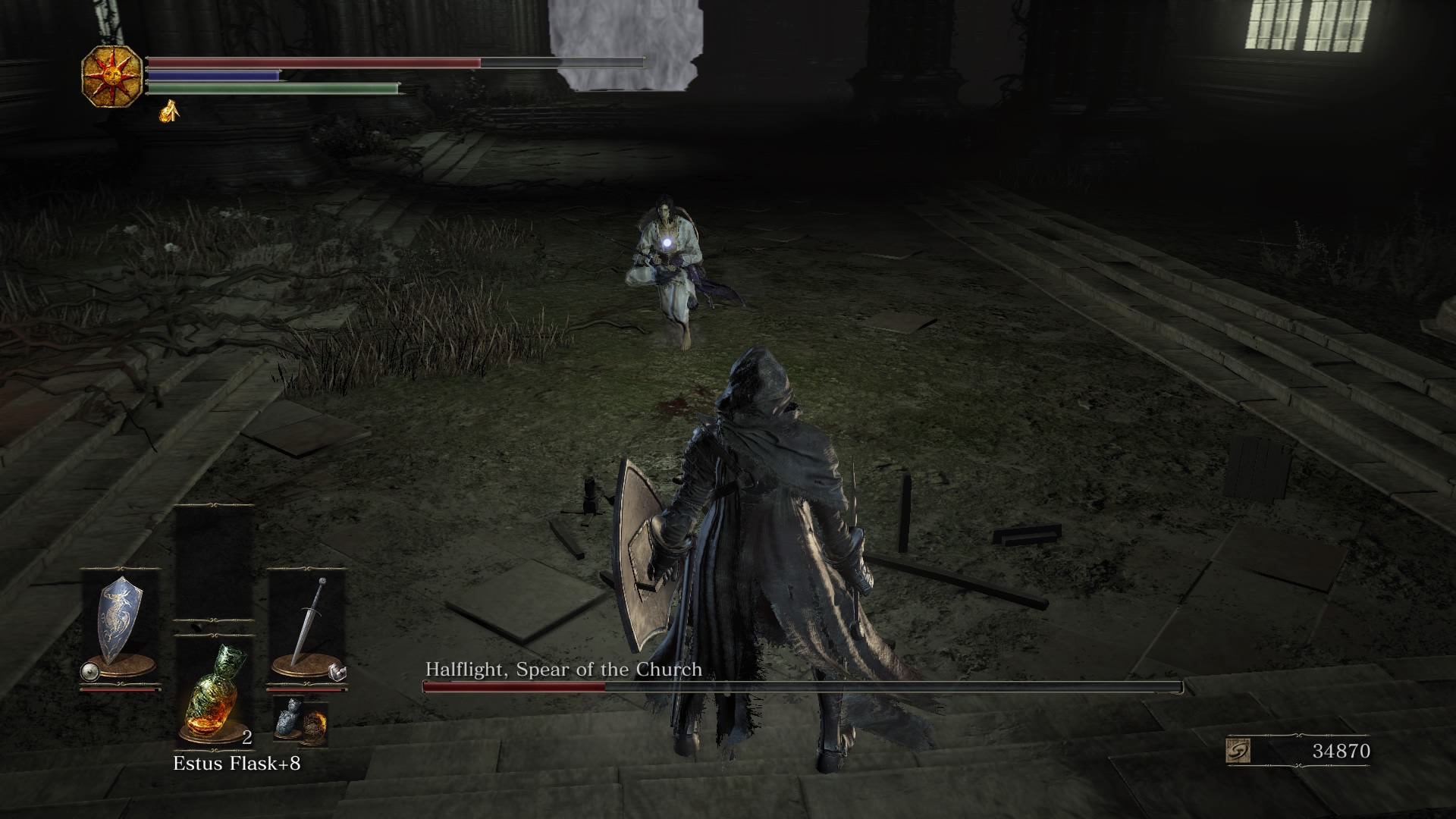 This hero is summoned by Judicator Argo, but unlike the other giant summons, this ghostly hero can be defeated. You can kill Judicator Argo (and the minion he summons) all before Halflight even appears. Ignore the Judicator, he dies all on his own. Focus on the minion – kill him fast, then deal with Halflight.

Halflight is a human-sized duelist that comes equipped with a variety of powerful magic attacks and weapons. He summons five tracking shots, launches a series of holy spear from the ground, and uses an incredibly quick katana.

NOTE: The minions that appear as you fight Halflight can heal him. When they bow, a magic circle will appear. That means they’re healing Halflight.

Use the pillars in the arena to separate yourself from Halflight and take cover from his bow / magic attacks. You can safely hide and take care of the minions that are summoned as you fight Halflight.

Halflight’s katana is weak against shields, especially his damaging two-handed quick-cuts technique. Only his magic attacks can break through shields, and Halflight doesn’t pose much of a threat when wielding his own shield. While one-handing his sword, he can’t do much damage at all.

Like his sword, his bow won’t be able to pierce through a good shield. Block when he attempts to fire a series of arrows. Your shield should deflect them safely. The arrow attack almost always follows the spear wall. Rush behind him and backstab when he attempts to use his bow.

When Halflight is at 60% health, he’ll summon another minion. These guys are fast – separate yourself using pillars and take out the minion first. You can get in an easy backstab if you time your attack just after the summoning animation is complete.

It’s also worth noting that almost any normal weapon will stunlock Halflight after a single hit. Two-handed weapons with good reach can absolutely ruin Halflight in a single combo. 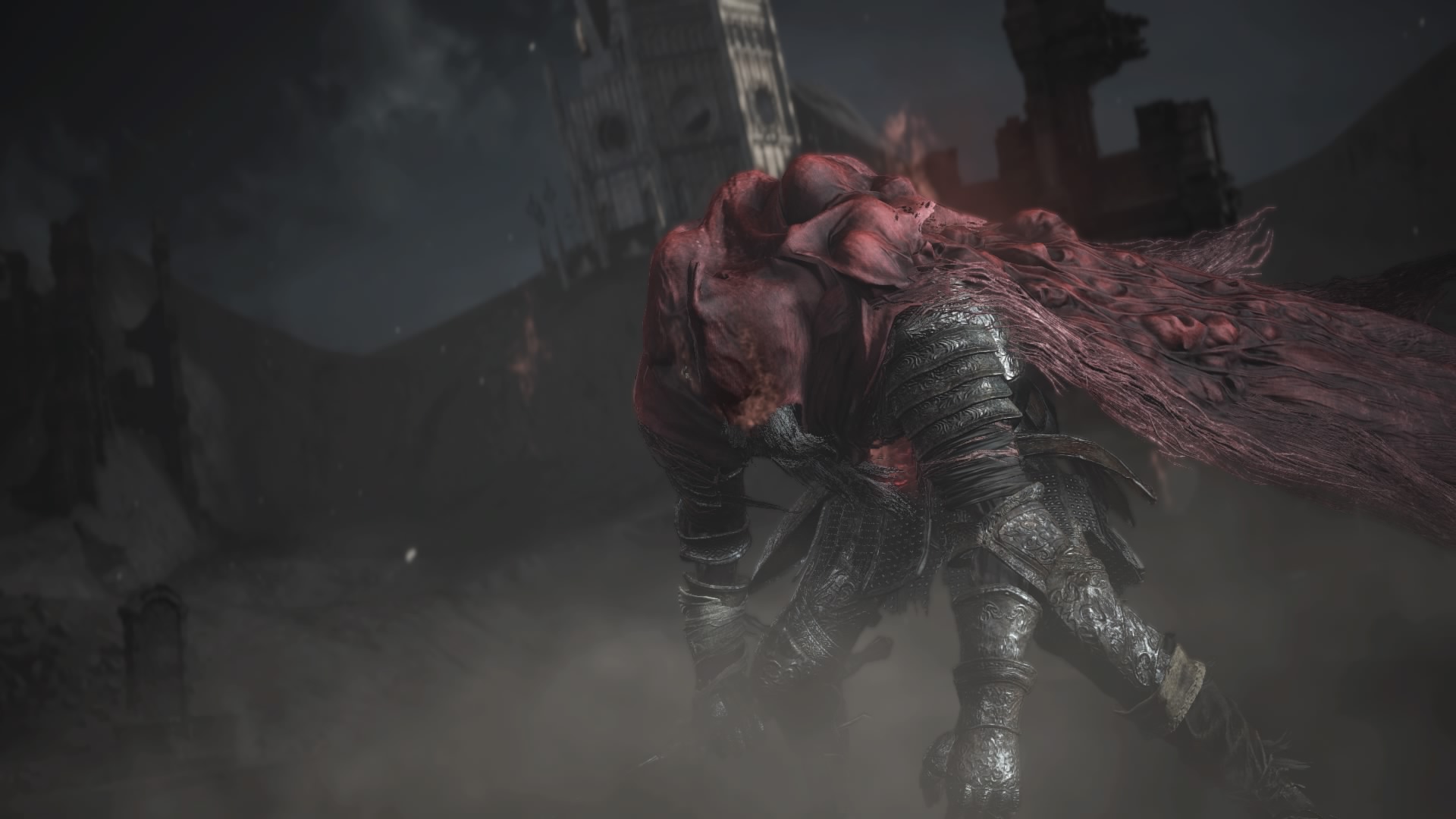 The pathetic knight fights like an animal. He’s all uncontrolled movements and wild swings, dragging a massive sword and jumping across the vast wasteland arena. Gael is fast and aggressive, and can clear great distances with his jumps.

At 60% health, the Slave Knight changes him demeanor completely. Instead of attacking wildly on all fours, Gael stands tall and unleashes a variety of new attacks. Utilizing both magic and new weaponry, Gael is even more fearsome in this form.

If charged with dark energy, his sword swing will generate more humanity spirits that shoot out in seemingly random directions. He’ll often groan before the burst of humanity – there’s a short period where he’s vulnerable to an attack or two during these frames.

This boss is all about patience. Nothing phases it. Attacks won’t stun it, and its attacks are wide. Even standing behind Gael, his attacks can strike the player. His cape lands secondary strikes after his sword swings, so you’ll need to block for one extra beat.

Don’t get greedy. Swoop in, get in an attack or two, then pull out. As seemingly out-of-control as this boss it, you only have one opponent to worry about.

For defeating Gael, you’ll get the “Soul of Slave Knight Gael” and “Blood of the Dark Soul”. 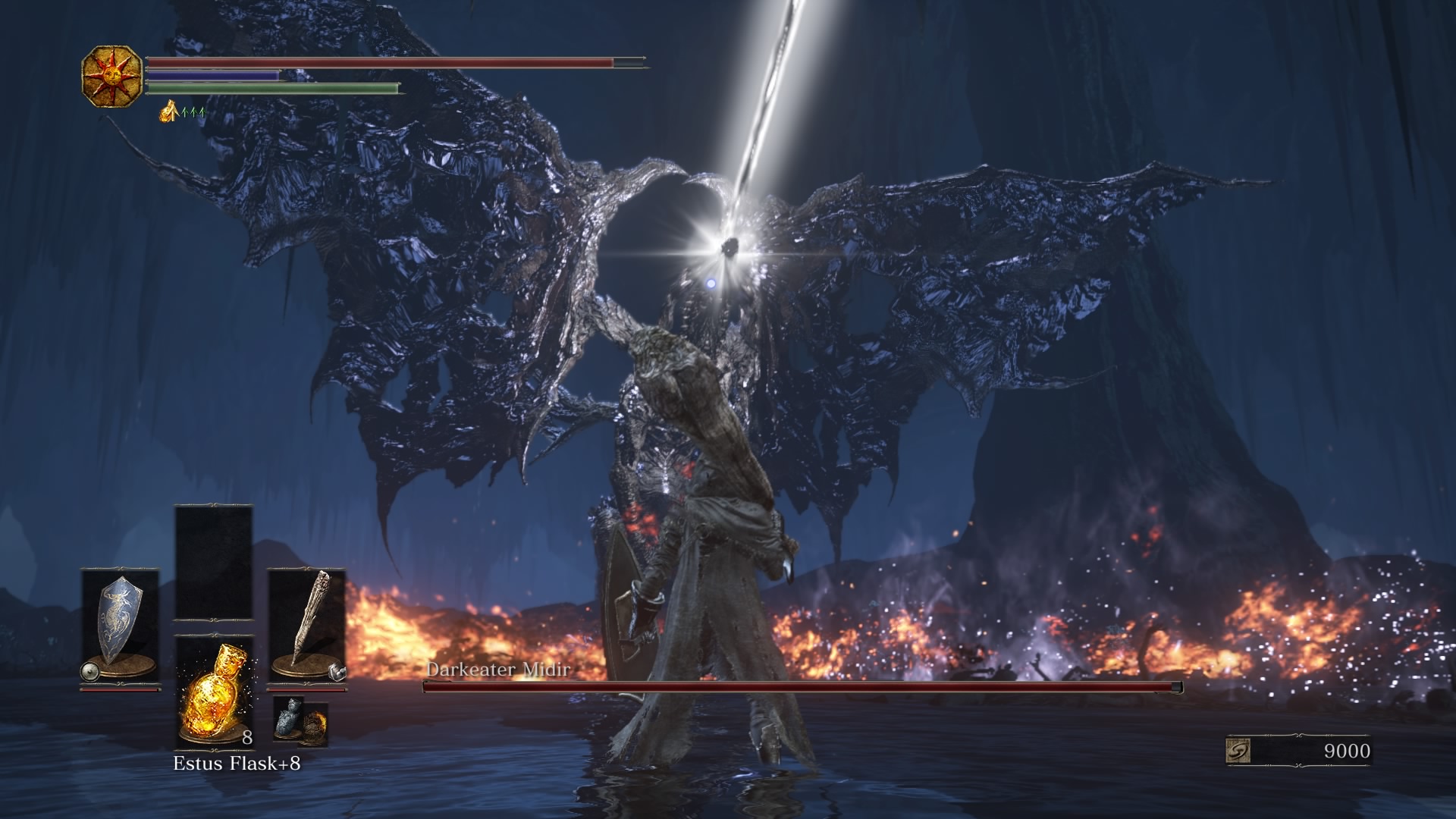 The massive dragon can be fought, but only after encountering it on the cliffs below the Church of Filianore.

Once you successfully knock the dragon off its perch, return to the Ringed Inner Wall bonfire. Ride the elevator down through the shortcut door and step through the secret passage inside the lift shaft.

Inside, you’ll find a chamber with an ember. Attack the statues in this room to remove an illusory wall that leads into Darkeater Midir’s boss arena. On the way, collect the Violet Wrappings and Antiquated Plain Garb from the corpse at the sword altar.

Behind the altar, drop into the cavern hole to face off against Darkeater Midir.