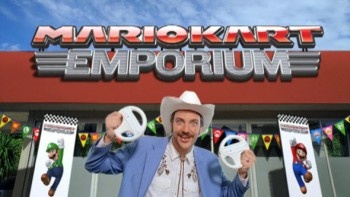 Look out, Hollywood: Videogame sales are no longer catching up to DVD and Blu-ray, they’ve surpassed them.

Worldwide retail sales of “packaged media” grew by six percent to $61 billion worldwide, according to figures from Media Control GfK International, $32 billion of which was generated by videogame sales. The report said the industry’s 20 percent growth in 2008 was “driven” by the popularity of the Nintendo Wii, echoing earlier comments by Nintendo that it was responsible for 99 percent of the industry’s revenue growth in 2008.

Meanwhile, combined DVD and Blu-ray sales actually shrunk by six percent, accounting for $29 billion in sales. The figures for both videogames and DVD/Blu-ray do not include any sort of rental income.

In 2007 the videogame industry made up 47 percent of packaged media sales and the figures for 2008 are actually lower than GfK’s predictions, which called for a 22 percent growth in videogame sales and a one percent increase in DVD and Blu-ray. Amy Heller, president of GfK’s U.S. operation, said the economic downturn that gripped the world in the second half of the year was responsible for the slower-than-anticipated growth.

GfK is calling for even further growth in 2009, predicting the game industry will hold 57 percent of media sales in 2009 while DVD and Blu-ray continue to slip, even though Blu-ray sales are expected to double to $2.9 billion. The decline in DVD and Blu-ray sales is primarily the result of a slowdown in the U.S., which experienced a sales drop-off of eight percent, compared to three percent in Europe and four percent in Asia.