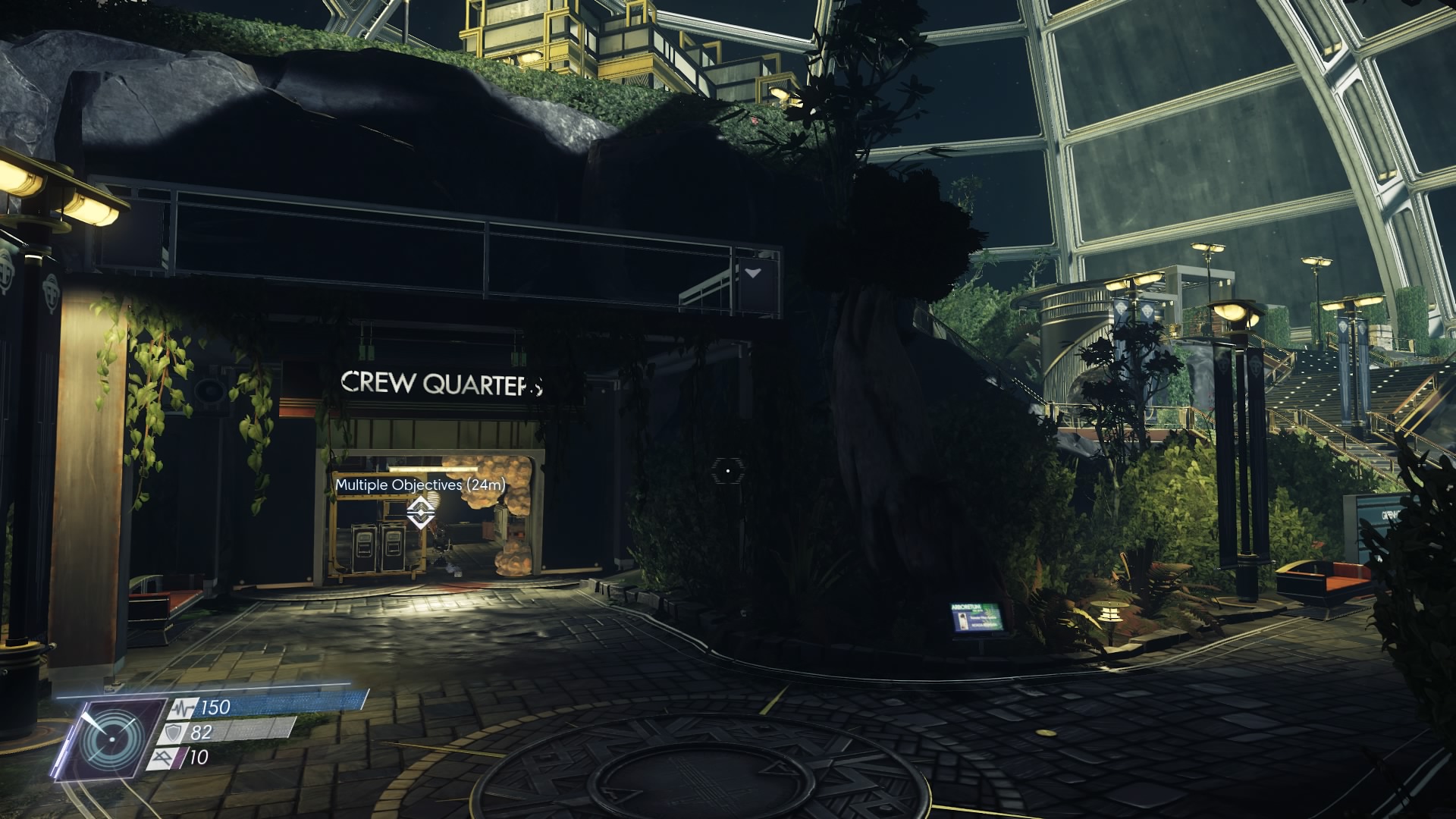 Need help finding all the Danielle Sho voice samples in Prey [2017]? See how to complete “Gathering Echoes” efficiently with this quick guide.

Nothing is ever easy on the Talos 1 Station. To get to Deep Storage and access fabrication plans for a plot-critical item, you’ll first need to make (yet another) detour to the Crew Quarters. There, you’ll have to scavenge up voice samples spread across the quarters from Danielle Sho.

Whether you need extra help, or you’re just curious how to hear all of the Danielle Sho voice samples, keep scrolling for the complete (and quick) “Gathering Echoes” quest guide.

The door to Deep Storage is locked. You’ll need voice samples from Danielle Sho to compile enough data to crack the vocal-only code. Danielle Sho’s voice samples can be scavenged all over the Crew Quarters. That’s our next stop.

In the Crew Quarters, download the area map from the Concierge desk workstation, then go upstairs to the Yellow Tulip lounge. There are over ten voice samples you can collect in the Crew Quarters alone, and not all of them are required. You only need enough samples to reach 100% for the objective.

Voice Sample #1: Reactivate the power in The Yellow Tulip using the maintenance hatch in the back-right room, then use the workstation in the office to the left of the stage to listen to Danielle Sho’s band for a voice sample. Wait for the song to complete – the sound will attract enemy phantoms.

Voice Sample #2: There is an optional voice sample available in the Talos 1 Lobby – Trauma Center area. Enter the Trauma Center with a keycard from the desk opposite the Shuttle Bay entrance hall, and search the second office on the left. There’s a session log you can download off the workstation with Danielle Sho’s voice.

Voice Sample #3: Enter the Crew Cabins B area to find Danielle Sho’s cabin. The door is already open. There are two samples here – download one from her computer, and collect the second from the broken transcribe by the bed. Use Repair 1 and one spare part to fix it.

Voice Sample #4: Another voice sample is available in Abigail Foy’s cabin, just down the hall from Sho’s apartment. Check her computer and download the file from her utilities folder. You’ll need Hack 1 to get through the password screen. The keycard to her cabin is located on the large table, second floor Recreation Center.

Voice Sample #5: In the Crew Cabins B area, continue into the Crew Habitation Pods B room. There’s a body down the first row with a transcribe. Grab it, and grab the second transcribe in the open pod at the end of the row.

Voice Sample #6: There’s a semi-hidden voice sample in the Theater area. Go to the second theater, the one showing “Transgressions”, and find this transcribe on the floor, under a seat in the second row.

Voice Sample #7: Find a sample on Beatty’s body – she’s one of the mind-controlled employees in the Fitness Center. She’s also carrying a Treasure Map.

Voice Sample #8: Collect the transcribe in Will Mitchell’s cabin for another sneaky Danielle Sho voice sample. To get inside, defeat the Telepath in the Cafeteria and meet the cook in the kitchen window. He’ll give you the keycard.

Voice Sample #9: One more voice sample is available in the Kitchen Freezer. Defeat the Telepath in the Cafeteria to start “The Cook’s Request” – meet the cook and get the keycard to Will Mitchell’s cabin. Take the reward and show it to the cook to get inside the kitchen. Next, you’ll need to repair the regulator. Either replace it with a regulator from the greenhouse in the Arboretum, or use spare parts and the Repair skill to fix it. The cook will open the doors to the freezer, and you’ll be able to find Abigail Foy and her transcribe in the back-left room.

Voice Sample #10: The final voice sample can be collected from Danielle Sho herself. After listening to Abigail Foy’s transcribe in the freezer, find her hidden location in the Fitness Center pool area. Knock on the window with the wrench to signal her, and she’ll appear.

You don’t need to find every sample. Once you’re at 100%, you can return to the Deep Storage bulkhead in the Arboretum and unlock the door.