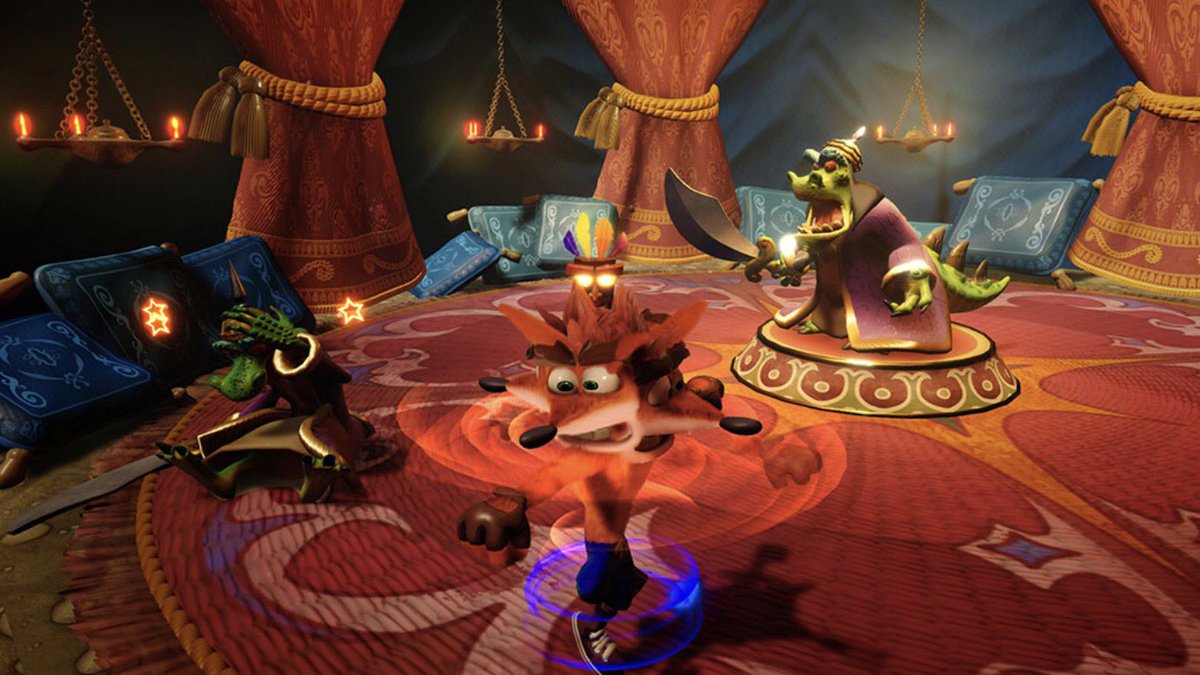 The bosses of Crash Bandicoot 2 will blast, stomp, and slice Crash into tiny Bandicoot pieces if you don’t know how to handle them. Get a few tips for each big battle here.

The fights in Crash Bandicoot 2, for the most part, are much more forgiving than the battles in Crash 1. It’s a nice break, but that doesn’t mean they’re all push-overs. If you’re having trouble with any of these behemoth battles, we’re here to help with a few tips for each Hub World boss.

There are only five fights to go around this time. If you’re looking for help for the first game, check out the link bank below for gem locations, secret levels, extra lives and boss tips.

Bosses are unlocked after finding all the Crystals in each Hub World. There are 5 bosses in Crash 2.

Ripper Roo is just a little bit easier this time around. Instead of mercilessly stomping on Crash Bandicoot’s head, he’ll bounce around his arena and spawn TNT crates.

The boss has two phases that he repeats three times — first he’ll hop around and spawn TNT crates, then hops around and spawns nitro crates. When the nitro goes off, spin-attack Ripper Roo to damage him.

The trick is just finding the right spot to stand for each phase. Here’s a quick guide.

Spin-attack Ripper Roo after he stuns himself and stand in the right spots to win this battle.

The Komodo Brothers are a pair of sword-swingin’ lizards that hang out in a circular arena. The larger brother stands in the center, and sends his little brother spinning wildly with a sword.

Stay away from the center brother, and dodge the spinning brother until he gets dizzy. That’s when he’s vulnerable. Use a spin-attack to bounce him into his big brother, dealing damage.

After taking a hit, the big brother will begin throwing swords in a slow arc as he spins around the arena. Just move out of the way and Crash will be fine. Stay behind the sword-slinging fool and you’re safe.

The fight continues like this — the big brother spins the little brother and throws swords at Crash. Keep moving, and stay on your toes. Watch which way the spinning brother is moving, and try to stay close enough so that you can attack him when he’s dizzy. Land three hits and this fight is over.

Tiny Tiger takes a page from the original Ripper Roo in this difficult fight. Like Ripper Roo from Crash 1, you’ll stand on a 3×3 grid of floating platforms.

The goal here is to lead Tiny Tiger toward the red-flashing platforms. Those warning lights mean the platforms are about to fall away. You’ll have to get Tiny Tiger to fall to deal damage — but he only takes three hits, thankfully.

What makes this fight so tough is how random it can be. Tiny Tiger doesn’t always follow Crash logically, and the falling platforms can leave you stuck. There are a few tricks you can use to make this battle slightly easier.

Tip #1: Use the slide-jump to gain more distance. You’ll be able to escape and cross a full platform-sized gap with one of these handy jumps.

Tip #2: If Tiny Tiger is about to jump toward you and you’re stuck, wait for him to leap and you can actually jump underneath him, landing on his previous platform.

Tip #3: Jump on every red platform you can. Why? Tiny Tiger will attempt to copy your movement pattern no matter where you are, and will often jump into a bottomless pit whether there’s a platform there or not, just because Crash was there at some point during the fight.

The tricky part is just staying alive. Keep trying and don’t give up, it looks hard, but it isn’t nearly as tough as it seems.

Phase 1: Targets the arms when they unfold — N. Gin uses his arm cannons to fire a sustained beam that he moves up and down as he sweeps it across the arena. Watch the pattern and jump or stay low to avoid it.

Your best bet to do damage during the first phase is to target the second open arm. Dodge through the laser beam, then shoot the second arm while it’s vulnerable. It stays open for a long period of time, giving you time to really blast it.

To make this battle easier, slowly whittle down both arms before destroying one of them. They’ll begin to smoke and spark heavily when damaged. If they’re both weak, you can destroy both in quick succession, and move onto the second phase of the fight.

Phase 2:Next, N. Gin uses his missile pods. Markers will appear on the arena, showing where the rockets will land. Just avoid those areas and you’ll be safe. Shoot the pods when they’re open — they’ll only open for a short time while firing missiles.

After one pod is destroyed, he’ll begin firing missiles that travel horizontally across the arena. You can either destroy both at (about) the same time, or tackle this phase. It isn’t too hard, he only fires one missile at a time.

Phase 3: For the final phase, N. Gin uses a giant laser to blast your arena platforms. Get in about one or two hits, then retreat before he fires. New platforms will appear when there’s only one left. Don’t rush to attack him either — wait for N. Gin to come to you, you won’t have enough time to run over to him unless he’s already close.

Get in about 3-5 hits, and the final phase will be over.

For this final battle, you’ll chase Dr. Neo Cortex as he attempts to escape Crash with the Crystals. The trick here is just avoiding the incoming mines and asteroids — when Cortex slows down, use a spin-attack to dish out damage.

There’s no real trick here. Avoid the mines, spin-attack the asteroids, try to avoid as many objects as you can. When you catch up to Cortex, attack him. There’s really nothing else to it.