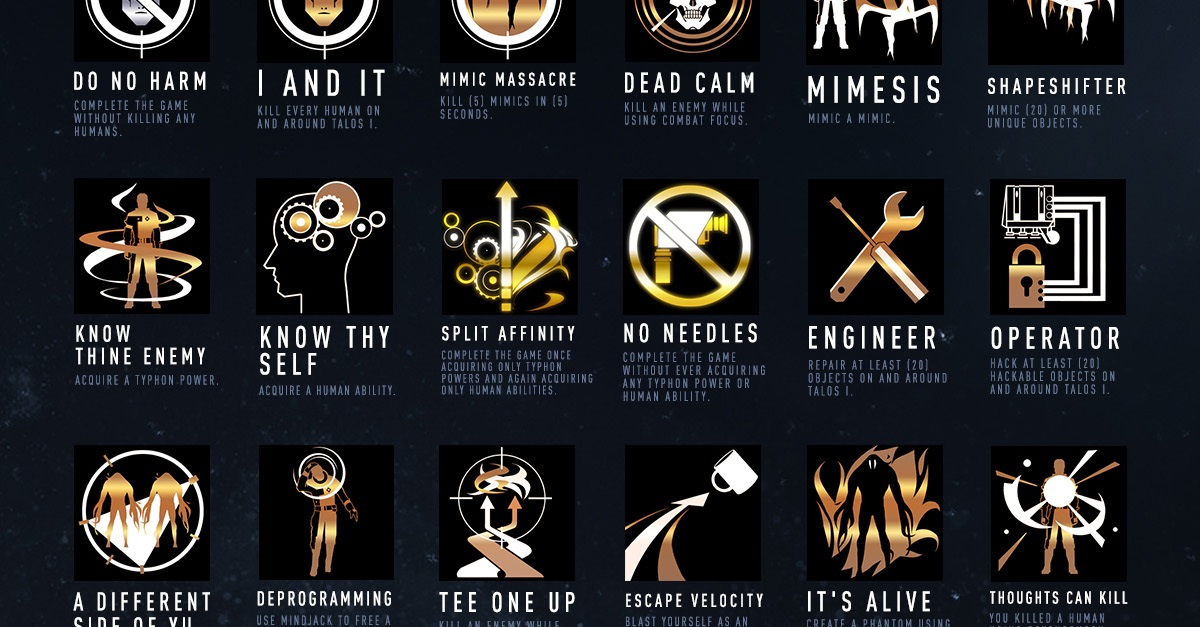 Take a deep dive into Prey 2 with the full, complete, and totally spoiler-ific list of trophies and achievements.

The list includes all the madness you should expect from this open-ended sci-fi shooter. You can complete the game without killing a single human (or killing them all!) — find all the missing employees, summon phantoms or use psychic lightning to blast enemies. You’ll even get to chop yourself up in helicopter blades… or recycle yourself.

It’s all very cool. See all the secret challenges, collectibles, upgradable features and special powers available in Prey 2 with the infographic below, provided by the people at Bethesda.

NOTE: Beware, there are story spoilers ahead!

Do No Harm:
Complete the game without killing anyone.

I and It:
Kill every human on and around Talos 1.

Know Thy Self:
Acquire a Human Ability.

No Needles:
Complete the game without ever acquiring any Typhon Powers or Human Abilities.

Engineer:
Repair at least (20) objects on and around Talos 1.

Operator:
Hack at least (20) hackable objects on and around Talos 1.

A Different Side of You:
Scan your phantom shift duplicate with your Pyschoscope.

Deprogramming:
Use Mindjack to free a mind-controlled human.

Tee One Up:
Kill any enemy while they are lifted.

Escape Velocity:
Blast yourself as an object for at least 20 meters while in Normal Gravity.

Thoughts Can Kill:
You killed a human using Psychoshock.

Ball Lightning:
Use Electrostatic-Burst to drop two or more Operators at once.

Transtar Gourmand:
Consume one of every type of food and drink on Talos 1.

Reduce, Reuse, Recycle:
Use a single Recycler Charge to recycle at least (20) objects.

Press Sneak:
Read all the e-mails on Talos 1.

Psychometry:
Find and listen to all the transcribe recordings.

I and Thou:
You completed the game in the most empathetic way possible.

No Show:
You died to Helicopter Blades on your first day on the job.

Awkward Ride Home:
You escaped Talos 1 aboard Dahl’s shutter with only Dahl.

Abandon Ship:
You fled Talos 1 aboard Alex’s escape pod before completing your mission.

Self-Incriminating:
You found out what happened to Mikhaila’s father and let her know.

Brain Trust:
You helped Igwe, January, and Mikhaila meet in your office.

Dear Future Self:
You found and listened to all the messages you left for yourself.

Suicide By Proxy:
You killed January.

This Never Happened:
You performed an Apto-Regressive Neurotomy on Dahl.

Facsimile:
You met January for the first time.

A Friend in Need:
You recovered Mikhaila’s booster shots and healed her.

Prism Master:
You read the entire Starbender series and don’t regret it.

The Gates of Hell:
You helped all Security Officers survive the Cargo Bay battle.

Adrift:
You rescued Dr. Igwe from a cargo container.

Black Market:
You found all the Smuggler’s Dead Drops.

You Rang?:
You used the Psychotronics Satellite to dismiss or summon the Typhon nightmare.

Makeup Exam:
You returned to the Sim Lab and completed The Room A, B.

A Gift to the World:
You found Gustaf Leitner’s Connectome for Dr. Igwe.

And that’s the full list of achievements / trophies for Prey 2. Check back soon for even more in-depth coverage.