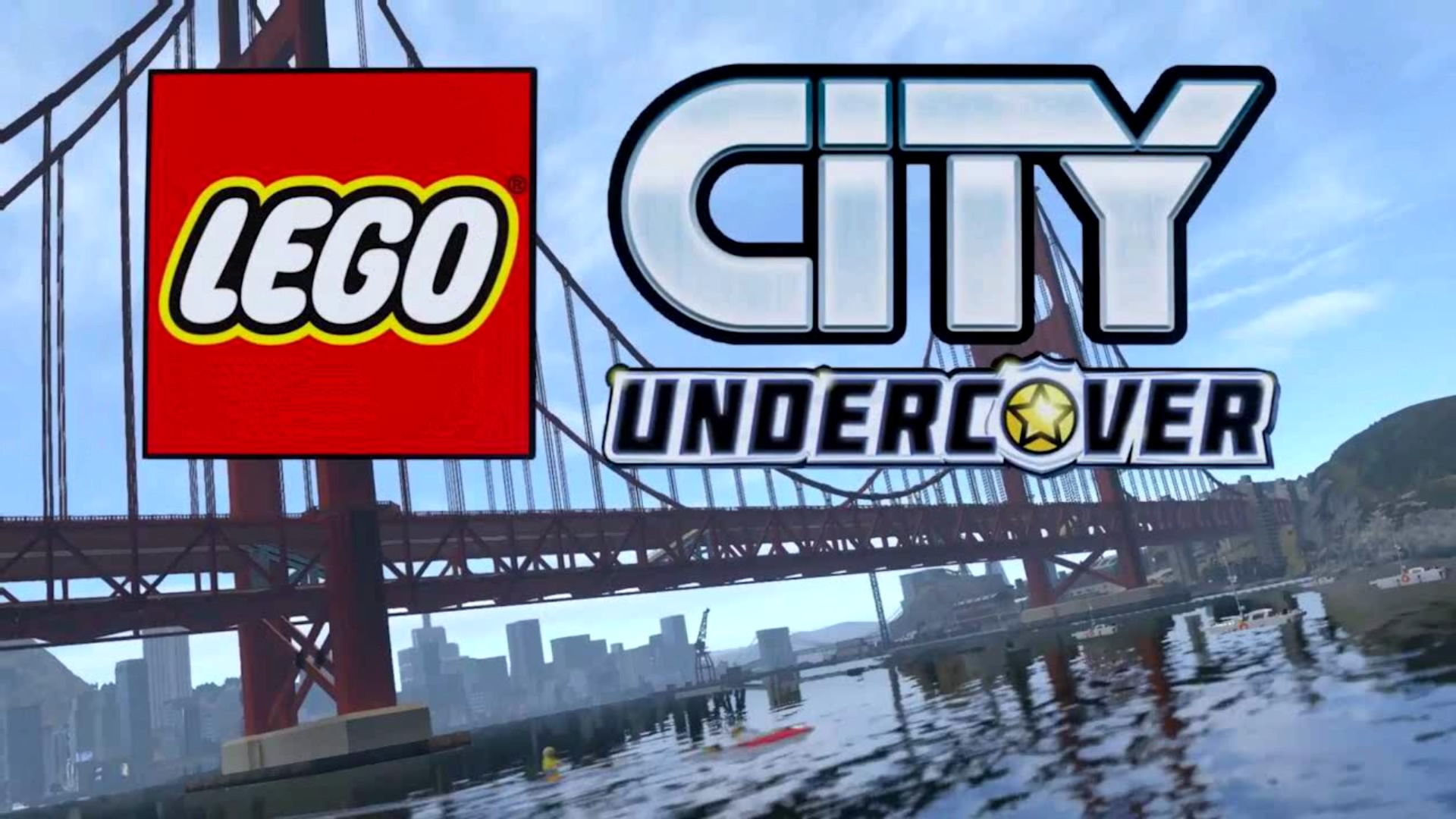 Solve the case of the century and bring an end to crime in LEGO City: Undercover with The Escapist’s story walkthrough, covering every chapter of this open-word adventure.

There are plenty of puzzles and challenges to complete in LEGO City, and if you’re struggling to solve mysteries or just want a guided tour through every chapter, we’ve got everything you’ll need to know to ace each stage.

This isn’t our first LEGO rodeo. Check out our huge Chapter 2: Blast From The Past

Welcome to LEGO City Undercover! If you’re new to LEGO games, there’s plenty to learn and experience as we explore the vast open world of LEGO City. After the opening cutscene, we join Chase at the harbor. Follow the silver spinning studs to your very own vehicle – a police car!

Next stop? LCPD (LEGO City Police Department) – don’t worry, the green studs will show you the way. Follow the “Sat Nav Studs” up the hill. On the way, you’ll encounter a police box.

Don’t forget! LEGO City Undercover rewards you for reckless driving. Hitting LEGO objects in the environment rewards you with stud multipliers (and studs) – the more stuff you smash in a quick combo, the more studs you’ll earn

Drive into the police shield to continue the story. Whenever you see a police shield waypoint in the open-world, that’s your goal! 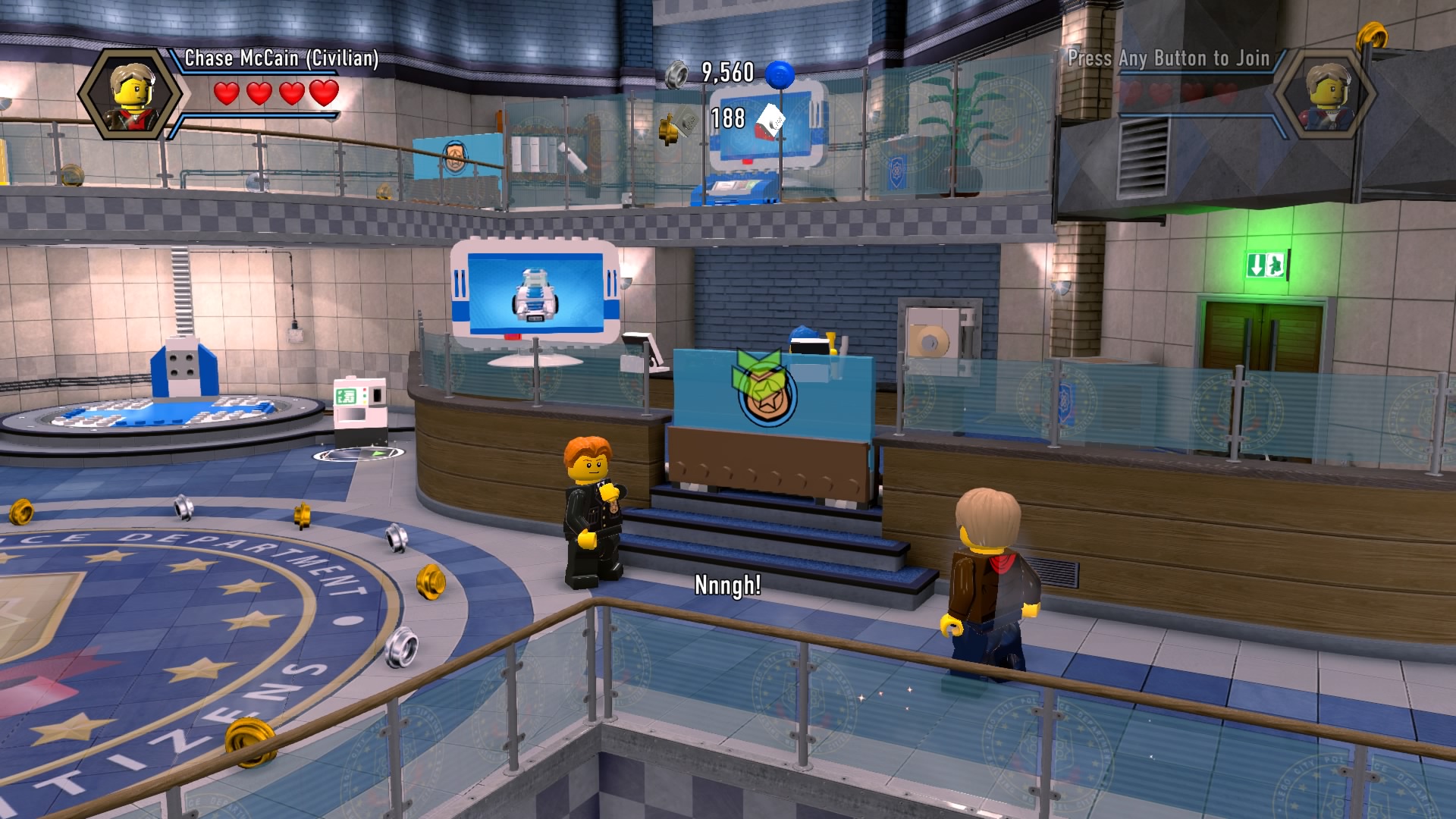 Now that Chase is in the Police Station, look for the green pointer on your screen. That’s always where you’ll find your next goal. In this instance, hop over the front desk and approach Frank Honey. The computer will explode – so it’s Chase’s job to repair it.

Hold down [Circle / B] to build hopping bricks. There’s a blue glow around any buildable LEGO piles. Construct all three, then follow Frank Honey into the basement. The entrance is to the right of the hacked computer.

Gold Brick Location: Smash all the LEGO objects on the right, in the foreground from the basement elevator. Break everything and build the bricks into a police car ride. Hop in to get the gold brick.

Downstairs, Frank will show you around the basement. There’s lots of useful stuff down here – but the main goal is getting the uniform. Go downstairs and punch all three crates, then build the hopping bricks into a locker. Open the locker and you’ll unlock the Chase McCain (Police Costume).

Follow Honey up to the Requisitions Desk upstairs after swapping into the Police disguise. Use the security terminal next to the door to open it – only the Police disguise can access these – then follow Frank Honey inside. At the desk, you’ll gain a very special item: the Police Communicator. 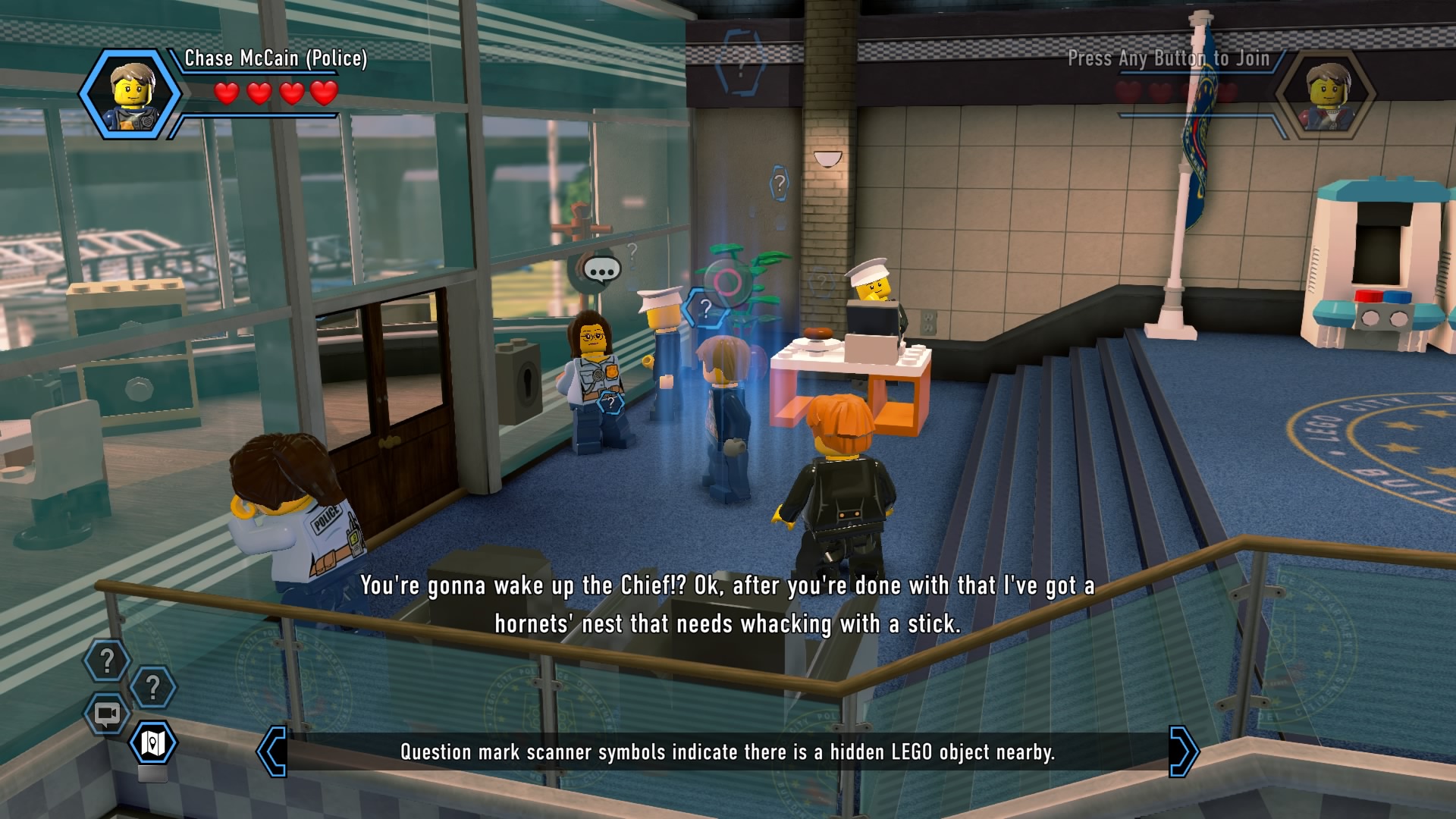 Return to the elevator to get back on the first floor, and retrace your steps back to that computer you fixed earlier. Use the computer, and you’ll have another problem. The chief is asleep! To wake him up, you’ll need to find the key to the Chief’s office. Frank Honey lost it, so you’ll need to find it yourself.

Go upstairs (the stairs are near the basement elevator) and you’ll get a call – press [D-Pad Down] to answer. You’ll now unlock the Detective Scan ability! To start scanning, go to the Chief’s office door and press [Circle / B] on the glowing detective scan spot. Follow the footsteps and open the cabinet to get the key.

Grab that key and use it on the locked office door! But the Chief still doesn’t want to wake up. Smash the cabinet behind the chief to build the hopping bricks. Your new boombox will wake him up. 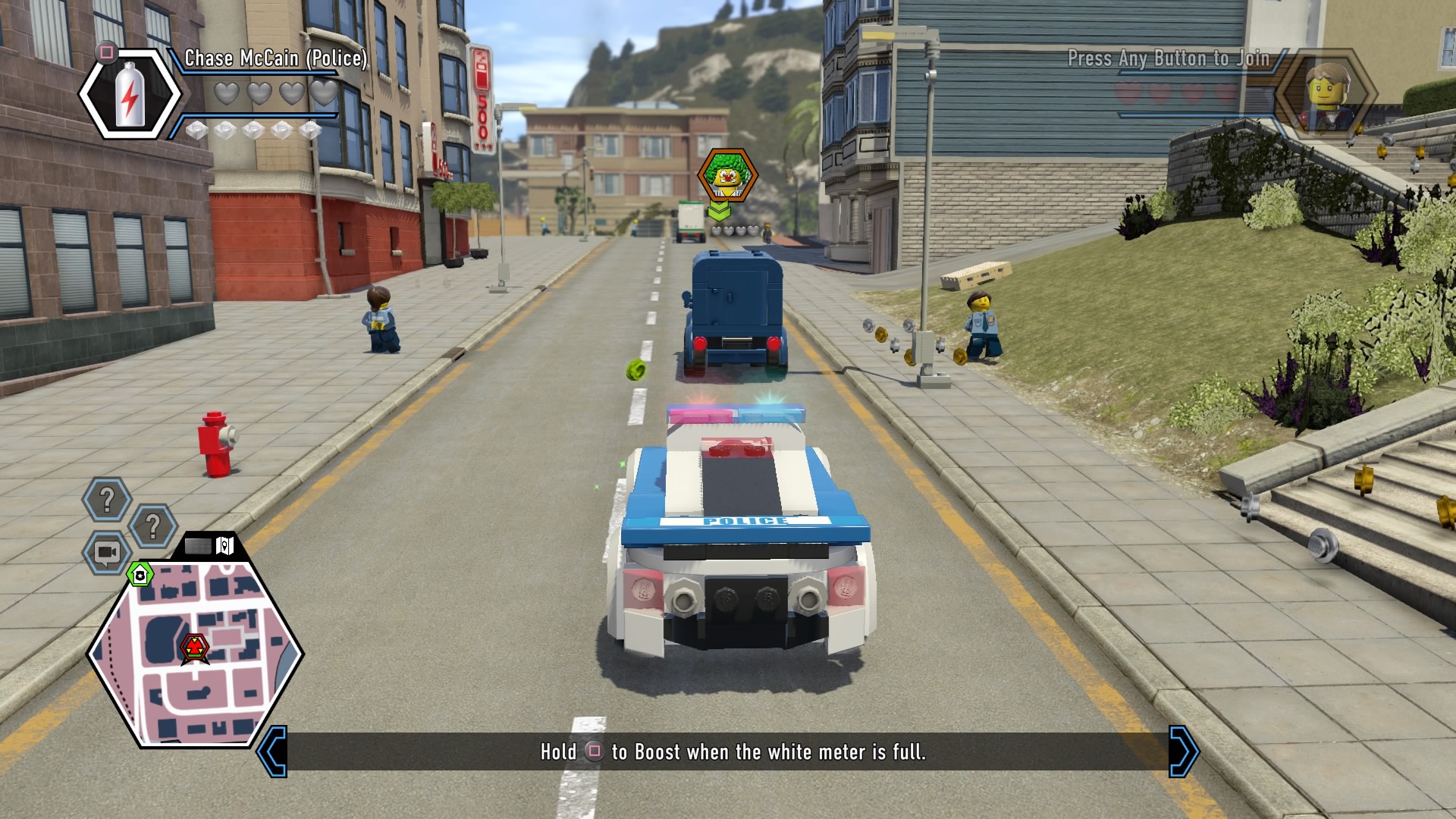 Outside, you’ll get your first police mission – the Cherry Tree Bank! It’s being robbed. Open the map, then select the police shield. Set a waypoint with [Square / X] to create a line of Sat Nav studs that’ll lead you to the destination.

Clown Arrest #1: The robbery is just down the street. Enter the waypoint to initiate a car chase! Drive after the stolen armored car and use [Square / X] to get a turbo boost and ram the van. After four hits, the van will crash and leave the getaway drive. Hop out and chase him down on foot.

After your first arrest, you’ll need to track down two more clown criminals. Follow the sat nav studs to the Red Cafe, located just across the street from the Police Department. Enter the shield and go to the rooftop – the clown is hiding in the area. 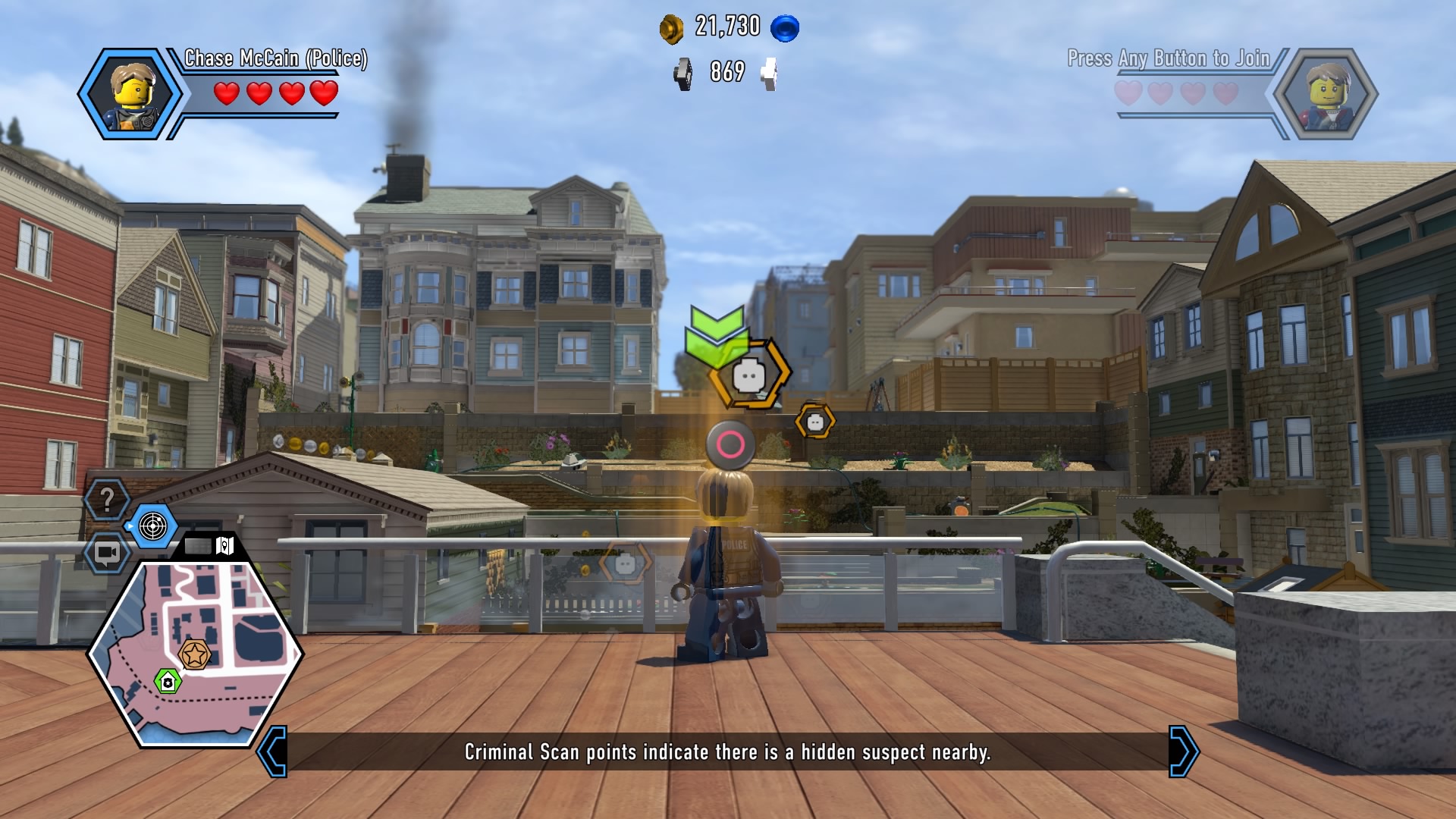 You’ll unlock the [Criminal Scan] upgrade. Interact with the glowing yellow criminal scan marker with an good view of the backyards. You’ll enter into first-person with people highlighted in yellow. Target the shed on the lower-right and hold [Cross / A] to scan the delinquent.

Clown Arrest #2: That’s the clown! Go down the stairs and use the LEGO vines to climb the fence. Interact with the shed, but the clown escapes. Grab the box of LEGO junk and deposit it on the green spot to the left. Build the hopping bricks to create a bounce-pad.

Up the steps, the clown will bust the beanstalk, making it impossible to climb up to the next tier. Use the Detective Scan on the blue marker near the former beanstalk and follow the footprints. Clear the leaves, grab the valve, and place it on the water pump.

There’s just one problem – the rocks are blocking the sprinkler hose! Follow the green hose and bash all the LEGO rocks to get the water going. There are four objects you’ll need to smash. When the water gets going, a wall of vines will appear. Now Chase can climb up!

At the top, go right and the clown will make a break for it. Go after him and arrest him – there’s only one clown left now. 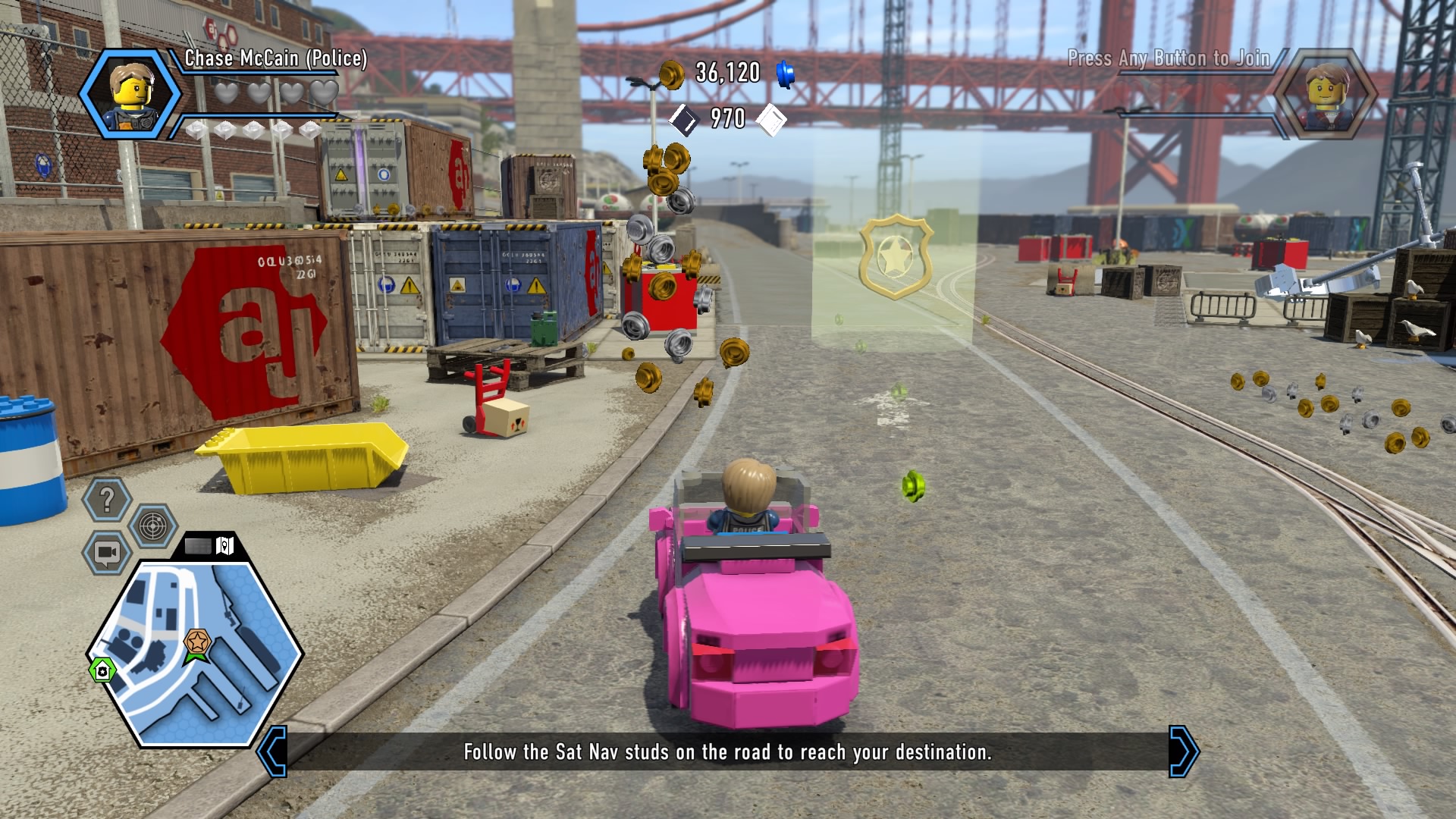 Press [R2 / RT] to use Chase’s police whistle and flag down a car to commandeer. Now head off to the docks to get that last clown.

Clown Arrest #3: At the docks, step onto the shield, then climb onto the shipping containers to reach a Criminal Scan marker. Look for the minifig dancing inside the cargo ship itself. He’s the only one! Zoom in and scan to mark him.

Next goal: board that big ship. Drop down and talk to the worker at the gate. He’ll drive the forklift over to a corner – jump onto the “fork” part and ride up to the gatehouse roof. Smash the green barrel, go inside, and bull the lever to open the gate. 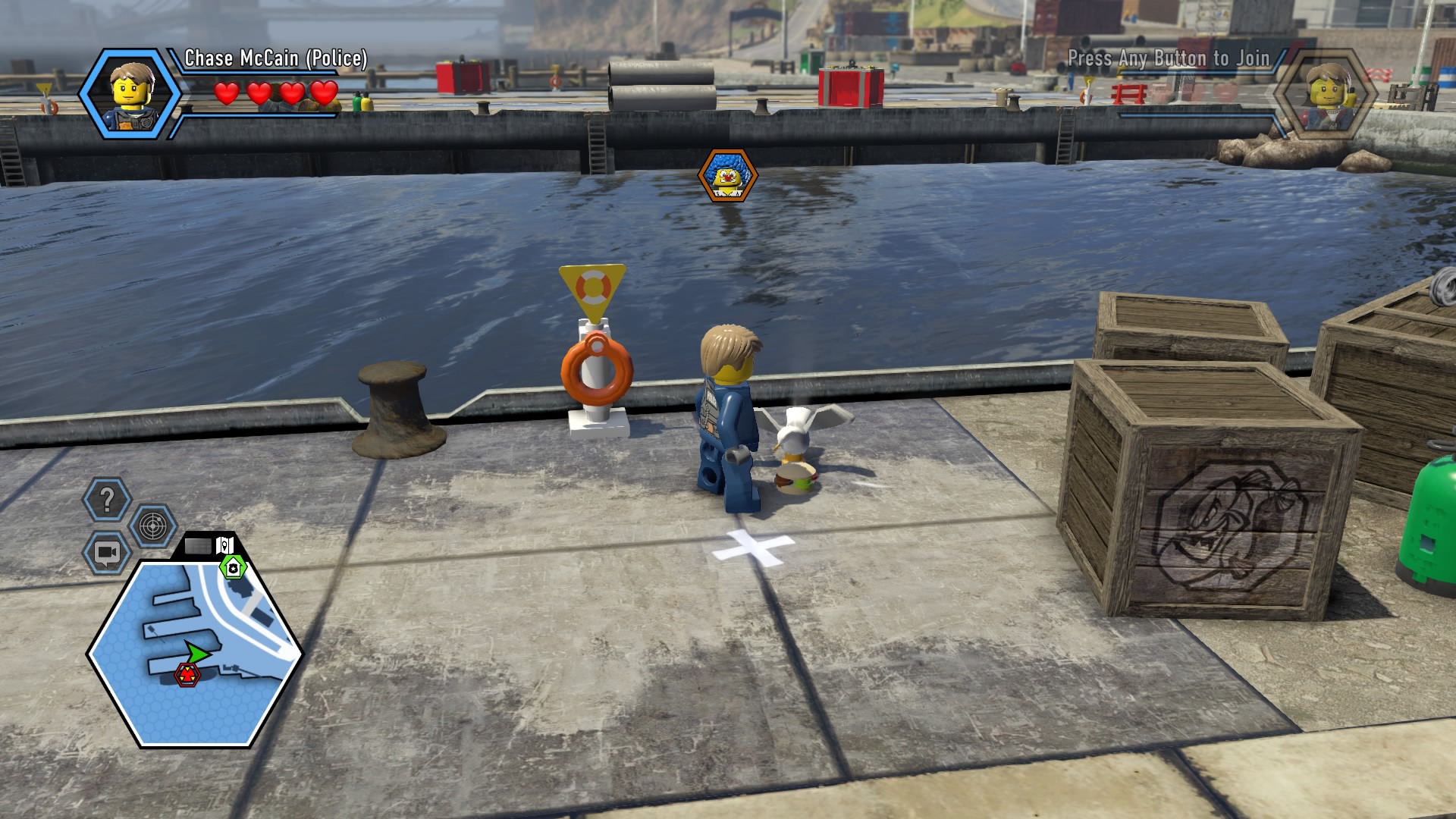 Through the gate, find the next worker that needs help. A seagull stole his sandwich! Go investigate the blue Detective Scan marker to the left of the worker. Follow the steps to the sandwich, then return the treat to its rightful owner. You’ll instantly get a ride up to the ship!

On the ship, open the container doors and chase down the last clown. That completes the chapter, and ends the case.