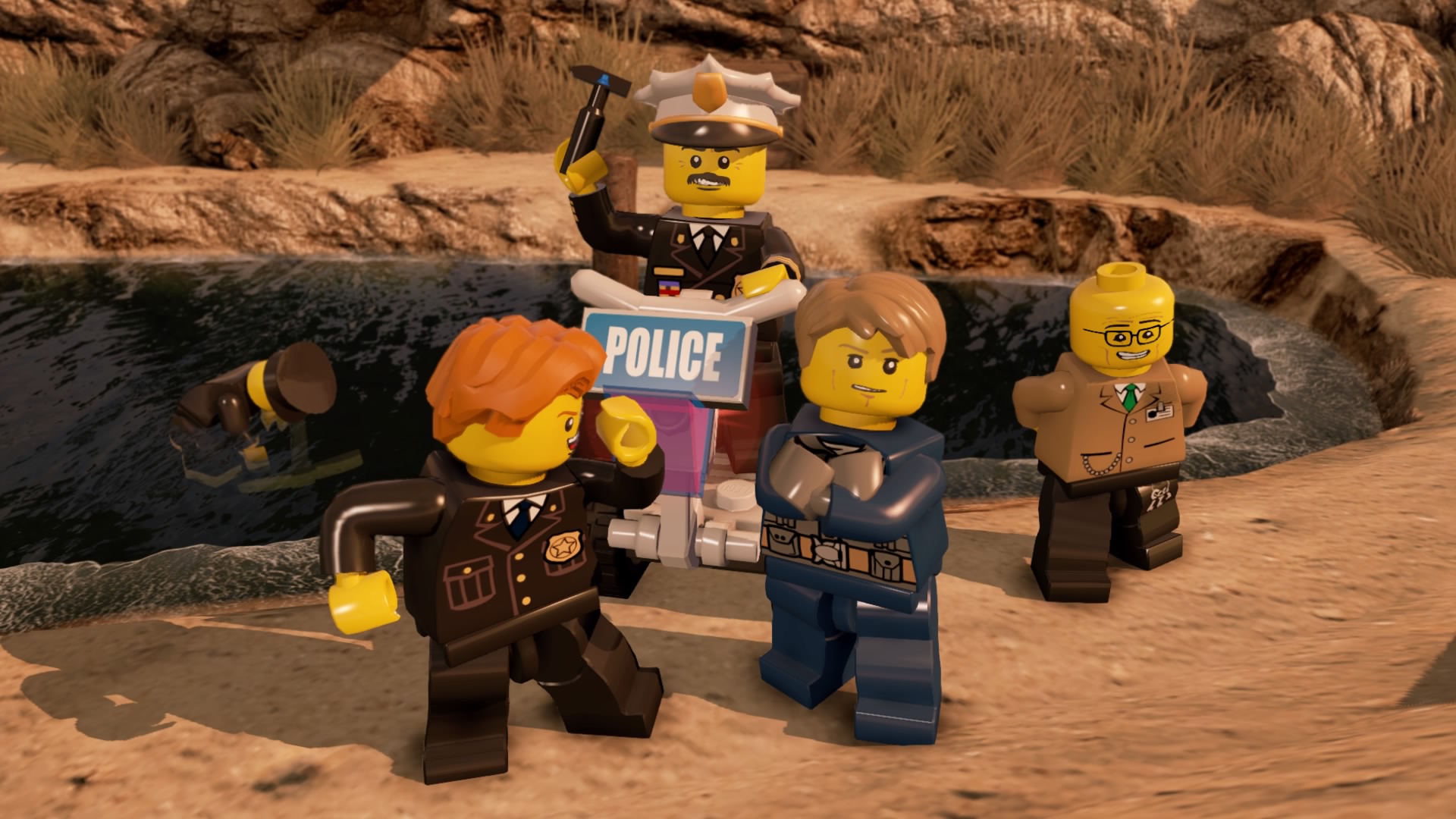 Take a trip to Albatross Prison Island and complete the first half of Chapter 3 with our continuing LEGO City: Undercover walkthrough.

Breaking into the prison, Chase finds himself in an extended riff on The Shawshank Redemption — including the opera scene. You know the one. There’s also a Robber Disguise to uncover, allowing good ol’ Chase to break open locked doors with crowbars or crack open safes. Check out the complete, step-by-step guide below to bust into Albatross Island and get the clues you need to bust Rex Fury for good.

Chase McCain’s only lead points him toward Albatross Prison Island. To get into the jailhouse, you’ll need to find a boat. There’s a ferry on the jetty behind the Police Station – run to the gate and smash the blue / white trash bin, then build. Now you can hop the fence!

After talking to Bluffbeard, Ellie will unlock the [Data Scanner] on your communicator. Activate it by pressing [Right D-Pad] to enter first-person view. Now you can scan the area for any nearby Super Bricks.

There’s a 10,000 point Super Brick on the Police Station signal tower. Use the hand-holds on the raised track support beam to climb along the top and drop down onto the garage roof. Then climb up onto the tower. Keep going to the very top to get a huge supply of Super Bricks.

When you’re ready, return to the Super Build at the Police Station dock and complete it for 15,000 points. That’ll create the ferry and let you reach Albatross Island. Use the Ferry Route terminal and select Albatross Island to continue the investigation. 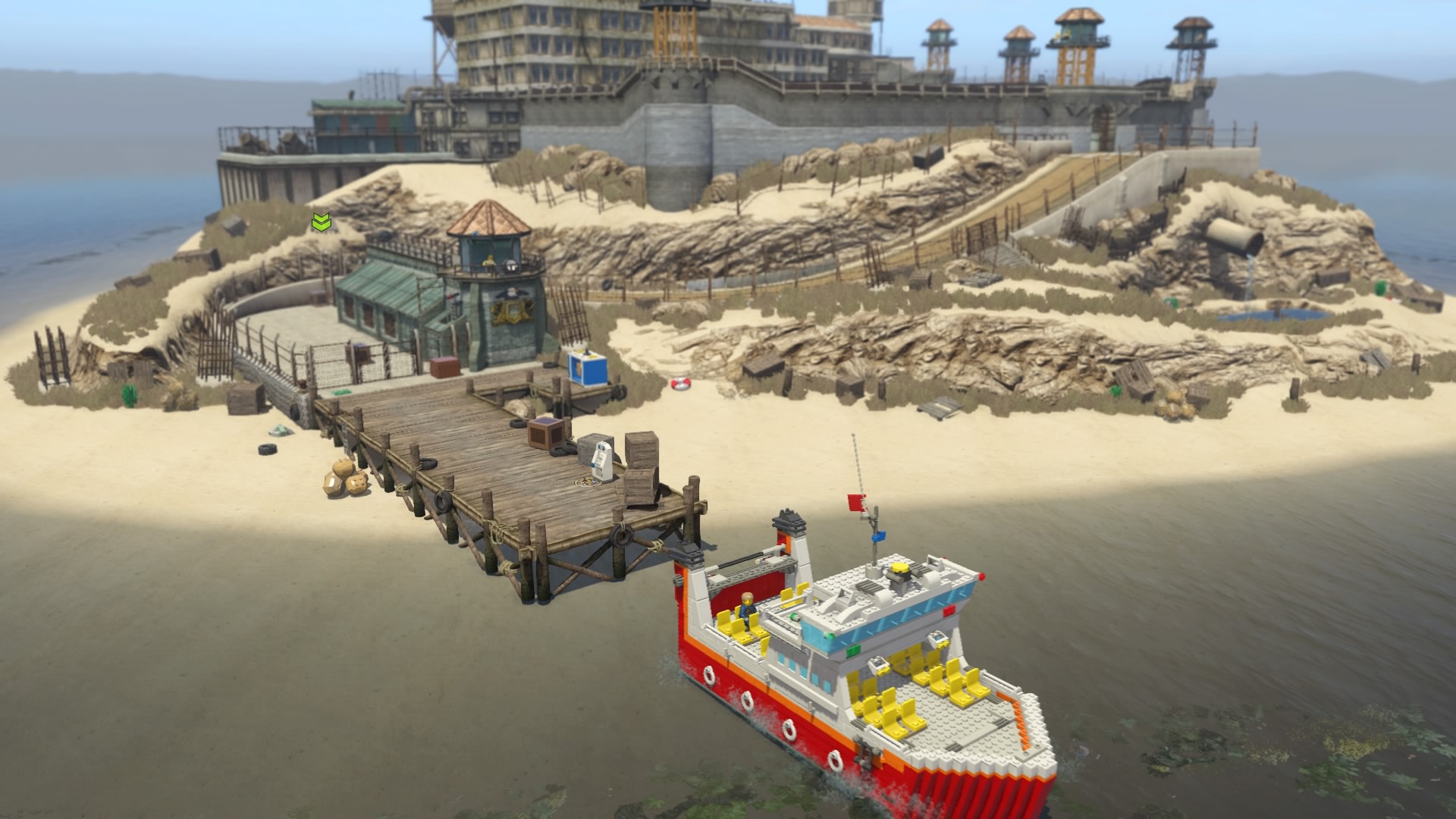 On the island, Chase will need to break in. The sleepy security won’t open the gates anyway. Don’t miss the Disguise Booth on the dock! To get past the first fence, break the brown LEGO box and place the crate on the green spot. Build the hopping bricks and jump the fence. Next, use Detective Scan near the brown LEGO box. Smash it to clear the way, then follow the steps to a pile of newspaper hiding a key. Use the key to unlock the guardhouse door, and interact with the Police Terminal down the hallway to open the second gate.

Through the gate, smash the LEGO dumpster to build more Free Run wall-jump surfaces. Wall-jump up, sprint up the slippery hills, and shimmy along LEGO edge of the fence to reach a hop-over point.

Grapple up to the rooftop and run right to the walls surrounding the prison yard. Run around the walls to reach the third tower with a grapple hook. Grapple up and slide down the loudspeaker pole to enter the yard.

Blue is in the basketball court – but the two inmates don’t want cops going inside. To help them, you’ll need to find their basketball.

Basketball Location: To get the basketball, go to the far-left corner from the entrance. There’s a small fenced-in area here. Climb up and drop into the enclosure, then grapple and build the blue / white bricks into a catapult pad. It’ll launch Chase onto another roof. Confront the inmates to the right and arrest them all to retrieve that basketball.

Talk to Blue and a new shield will appear. Step in the waypoint to enter the Prison Block level. 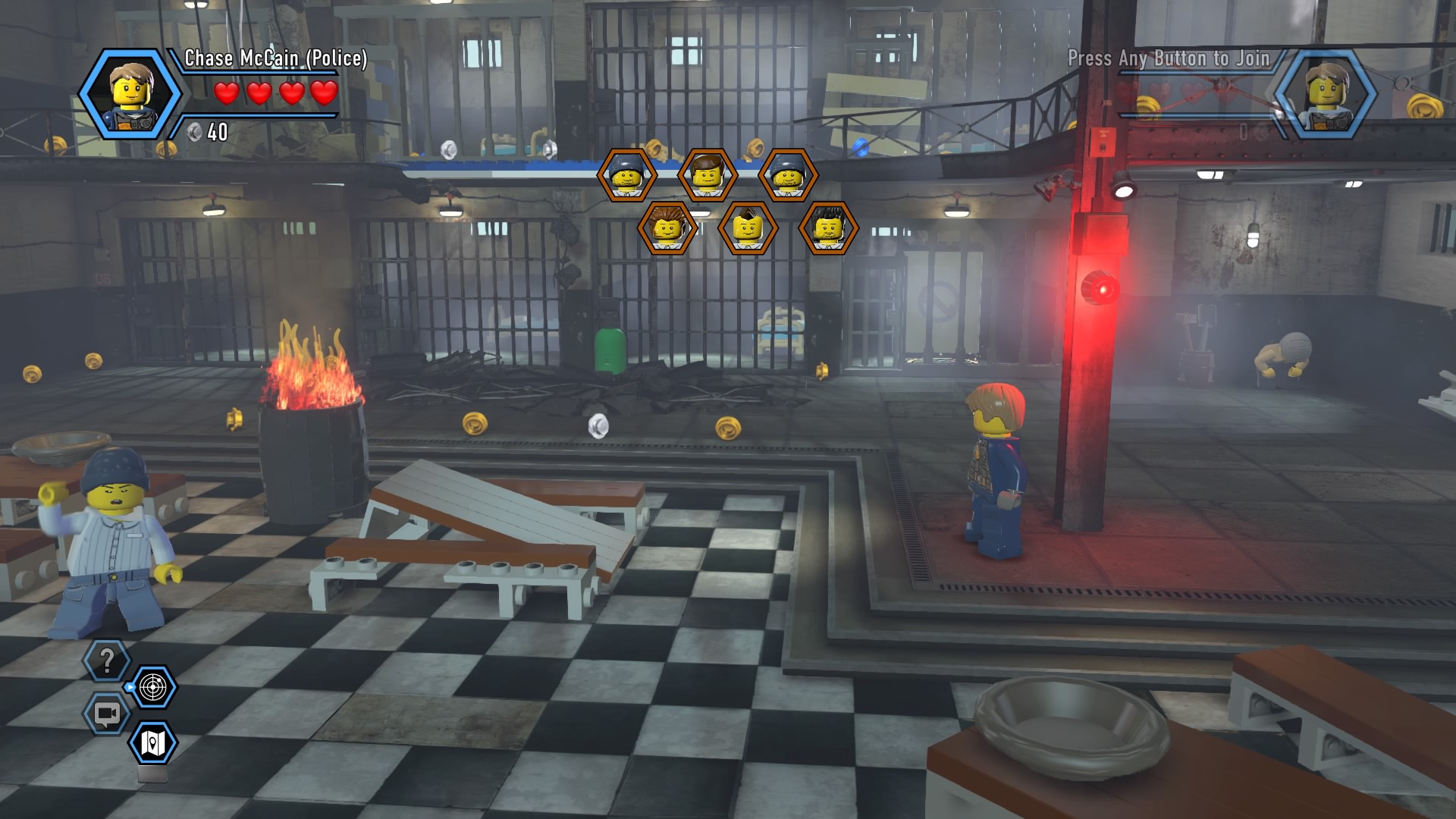 The prison is a mess – to get inside Blue’s cell, you’ll need to help the local guards stop the riot. There are six prisoners you’ll need to arrest in the prison block. Let’s get to work.

Prison Arrests: There are six prisoners to find. The first is just to the left. Keep moving left to find the rest – two are waiting in the center, another two on the left wing of the block, and the last guy is waiting on the far-left wall, looking at the vending machines.

The guard will open the door to Blue’s cell when you’re finished. Get inside and use the Disguise Locker to unlock a new costume for Chase!

Open the cell to the left (with the red crowbar icon) and smash the blue / white LEGO inside. Build to create a climbable wall to reach the second floor. 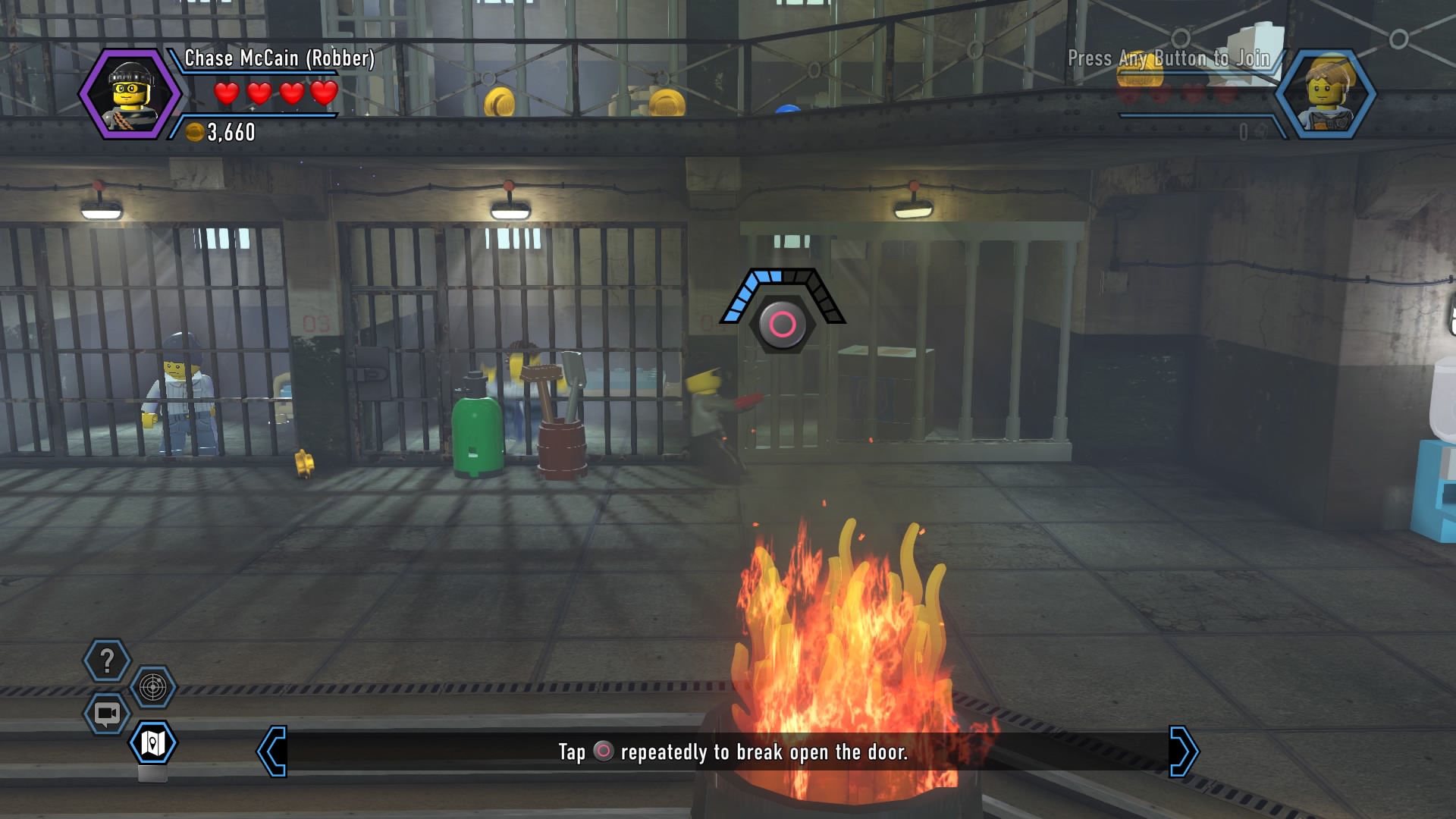 Red Brick Location: The Red Brick is accessible from the cell to the left after you reach the second floor of the block. Use the Robber Disguise to open the crowbar door, then punch through the left wall to reach this Red Brick.

On the second floor, smash the LEGO object near the busted elevator. Swap to the Police Disguise and use the Detective Scan marker to find a key. Use it to unlock the cell near the loose electrical wires, then punch through the wall and shimmy across that narrow LEGO path.

Bust open the door to the office with the Robber Disguise, then open the safe. Wait for the light to turn green, then press [Circle / B] to open the safe. Grab the keycard and run to the left-most room on the second floor. Insert the card into the terminal to open the door. That turns off the red lasers. Now Chase can reach the third floor!

Enter the red-laser room and use the Police Disguise to grapple up to the third floor. Move right (arresting criminals on the way) and use the Robber Disguise to bust open the cell door. Punch through all the LEGO walls to reach the Warden Office doors.

To open the Warden Office doors, smash the red / white LEGO objects and build a terminal. Use it to open the doors – now you can go inside. 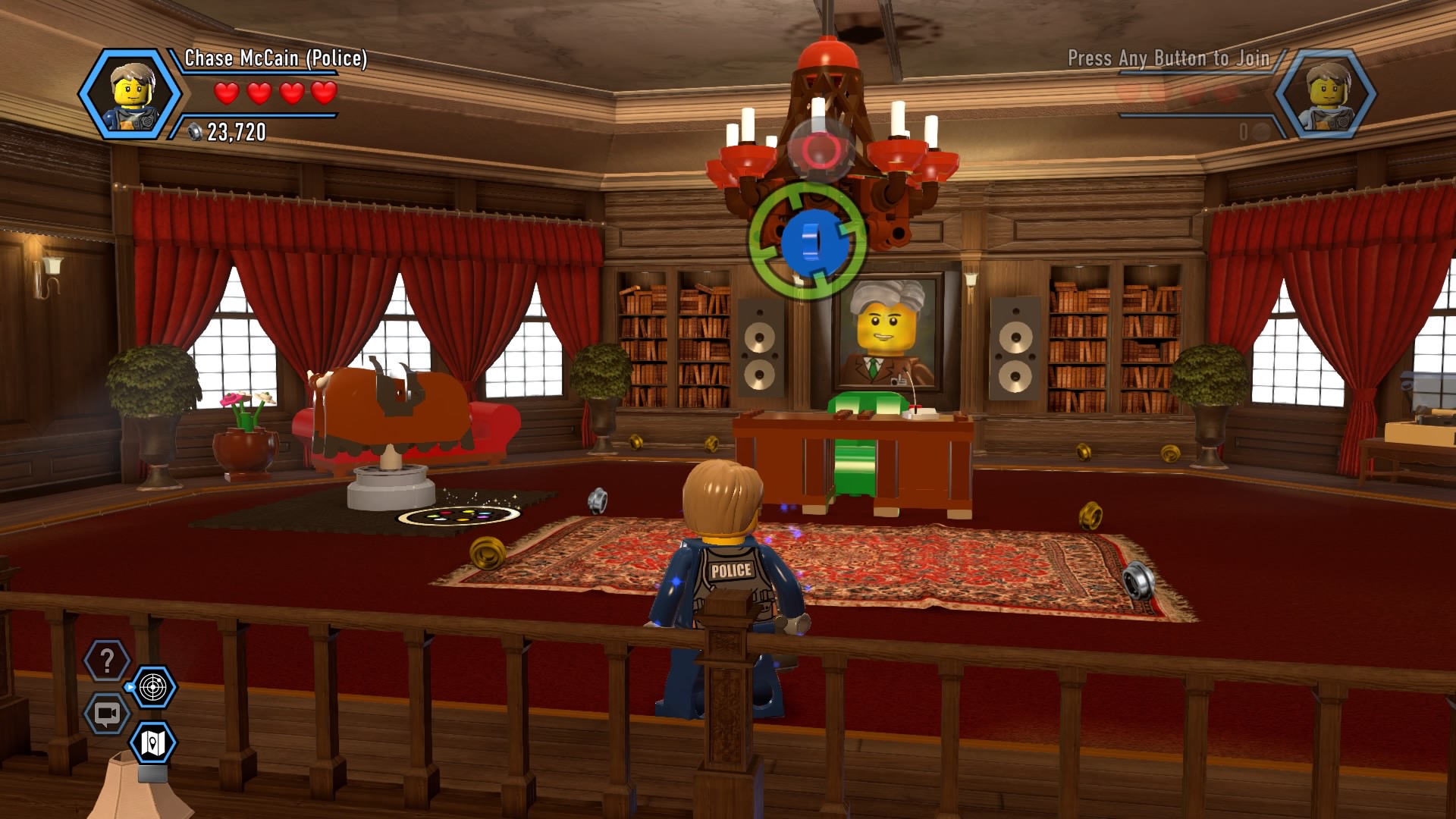 The office is a pretty fancy place. The Warden has his own secret elevator to Rex Fury’s special prison block, and we’ve got to find it. Pull down the chandelier with the Police Disguise Grapple Gun and build the hopping bricks to lock the Warden in his private bathroom.

His kicking causes a nearby painting to fall off the wall, revealing a hidden safe. Crack open the safe with the Robber Disguise and grab the record. Place it on the record player on the right and enjoy the extended Shawshank Redemption riff.

Construct the hopping bricks after the cutscene (behind the desk) and press the switch to reveal the secret elevator. Step inside to start investigating Rex Fury’s prison! 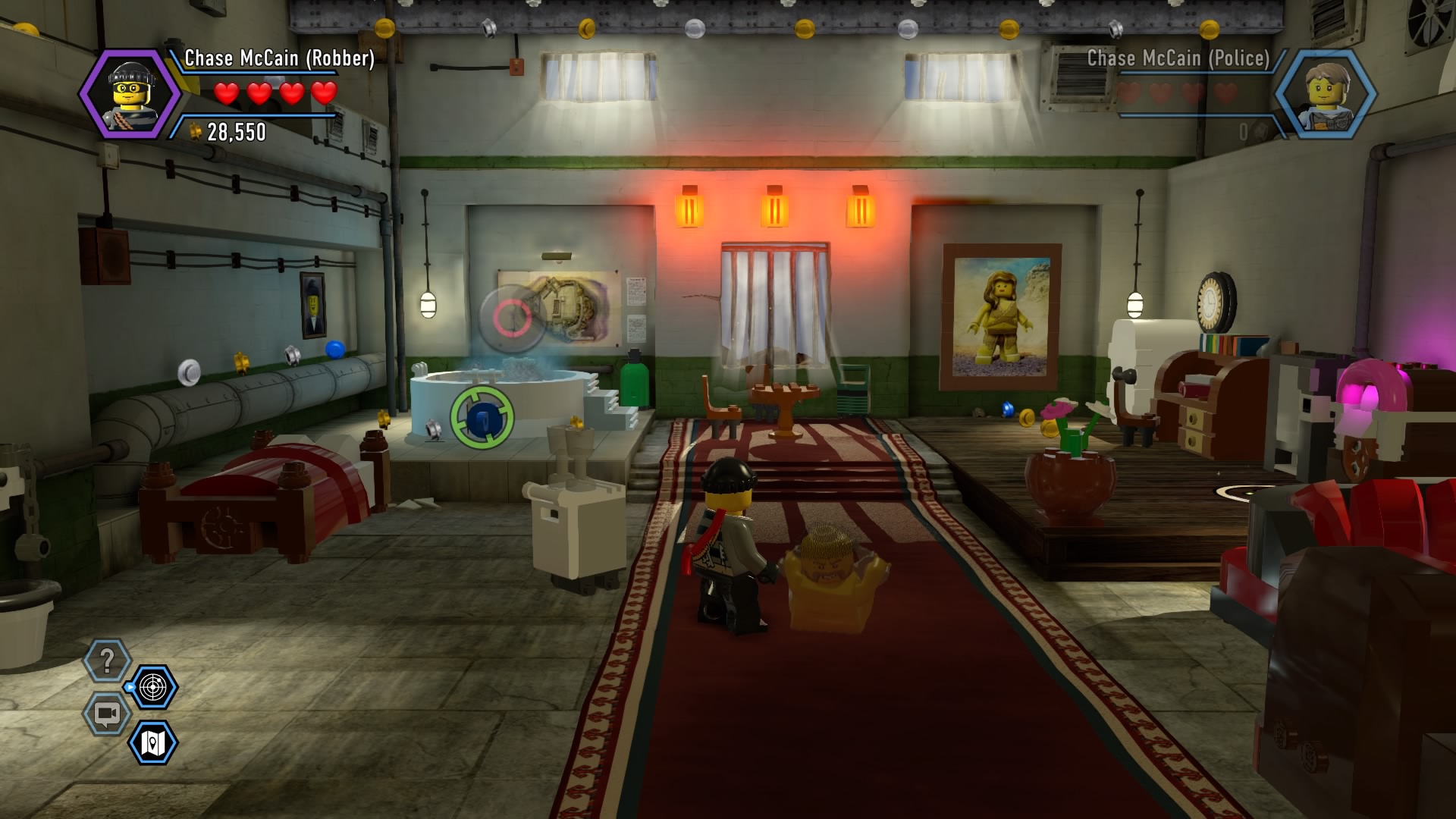 Rex’s cell is a pretty impressive place! There’s even a hot tub. Take care of the prisoners, then use the Police Disguise Grapple gun on the hot tub to reveal a hidden button. There are three hidden buttons you’ll need to press here.

Hidden Button #1: The first hidden button is in the hot tub. Pull on the grapple point to drain the water to make the button accessible.

Hidden Button #2: Interact with the punching bag in the front-right corner of the cell. Complete the mini-game to destroy the bag and reveal the hidden button.

Hidden Button #3: Smash the toilet (on the left) and ride the geyser up onto a high platform. Climb across the ceiling with blue / white LEGO bricks and smash the LEGO object on the right side to reveal a Detective Scan. Use it to find hopping bricks that build into the final button.

With all three buttons pressed, the secret painting will open. Dive into the secret escape tunnel to complete the level and continue the investigation – this time, Hunt needs to get inside the Bluebell Mine, in search for leads after finding a Bluebell Mine branded pickaxe.