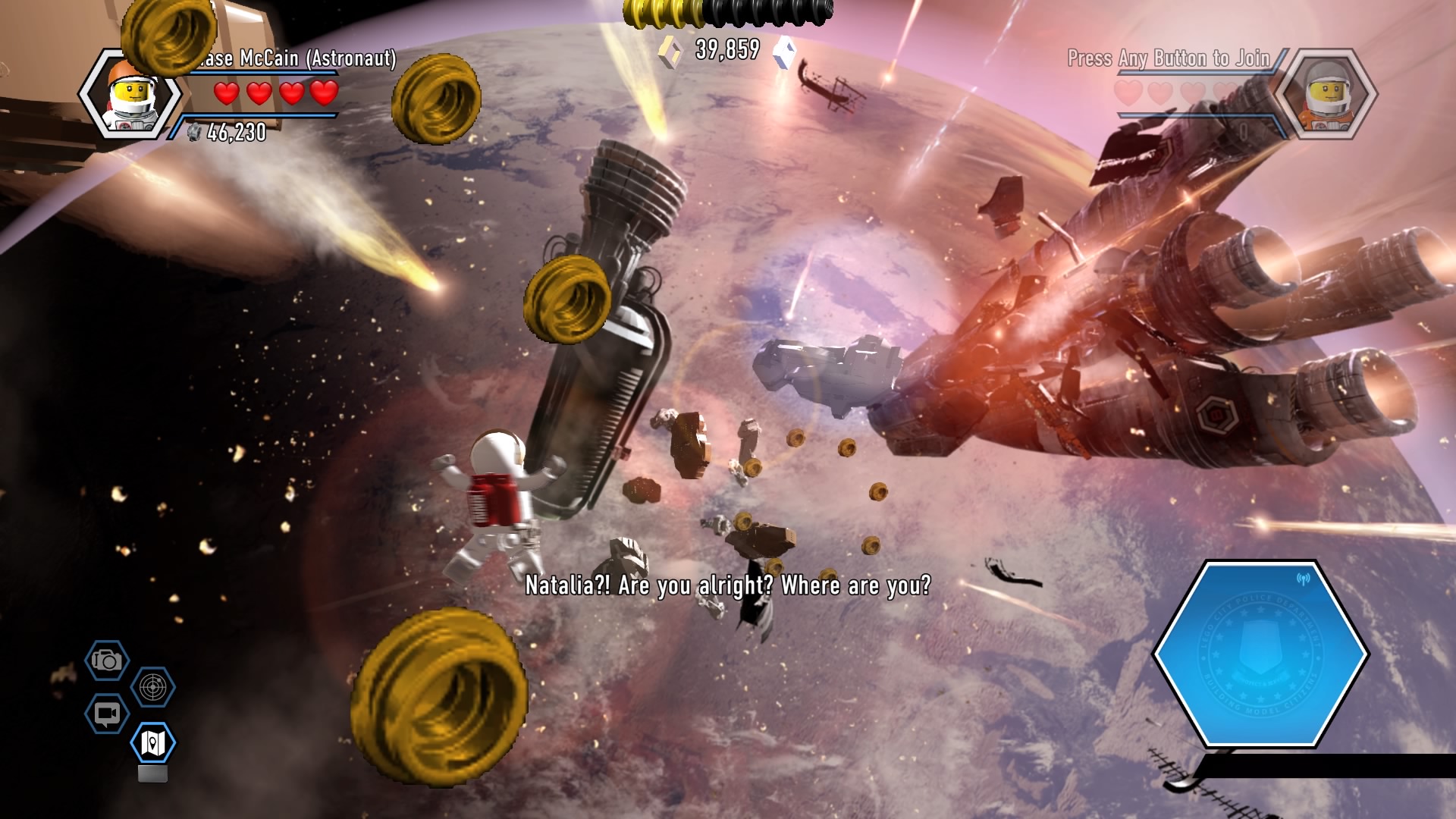 Chase goes “Far Above the Call of Duty” in the final chapter of our LEGO City: Undercover walkthrough. It’s time to bring Rex Fury to justice, even if it means going to the moon.

Rex Fury and Forrest Blackwell escaped to their Moonbase to enjoy a life outside the LEGO City PD’s jurisdiction, but little did they know — Chase doesn’t give up so easily. After a quick stop to the Apollo Space Center, Chase constructs a shuttle and arrives all the way on the moon. Blackwell and his cronies won’t make things easy.

This is it. The final chapter of LEGO City: Undercover. Enjoy the final ride, because things are about to get completely ridiculous.

Chapter 15: Far Above the Call of Duty

Chase and the Professor arrive at Apollo Island. To track down and bring Forrest Blackwell (and Rex Fury) to justice, you’ll need to reach the Launch Platform. Approach the lady at the fence, and she’ll open the gate for you.

Grab the nearest security vehicle and drive to the platform. There’s a ladder on the side – climb up to the spinning shield marker to start the next challenge. Hold onto your butts, because Chase is about to become a Space Cop. 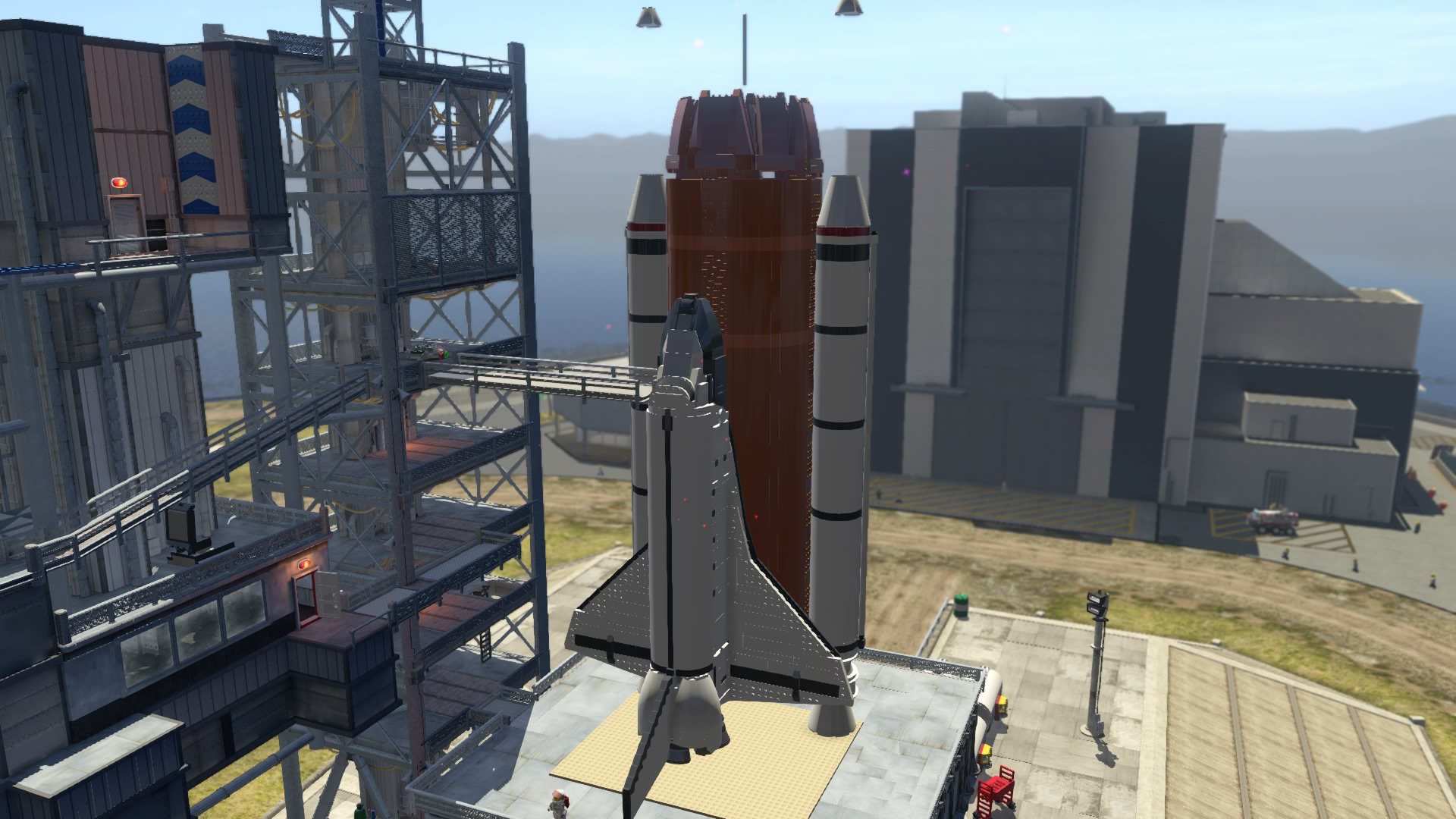 Before he can go into space, Chase needs to complete one last Super Build. You’ll need a total of 50,000 points – that’s a whole lot. Let’s start hunting.

10k Super Brick: Next to the Super Build pad, climb up into the tower. Use the grapple to hook up to the upper level, then jetpack across the gaps left until you reach a Space Crate. Unlock the crate and use the pole to the right to reach the 10k brick that appears.

10k Super Brick: From the first Super Brick, follow the studs up and across the narrow blue LEGO path to find a Super Brick before the wall-jump panels. 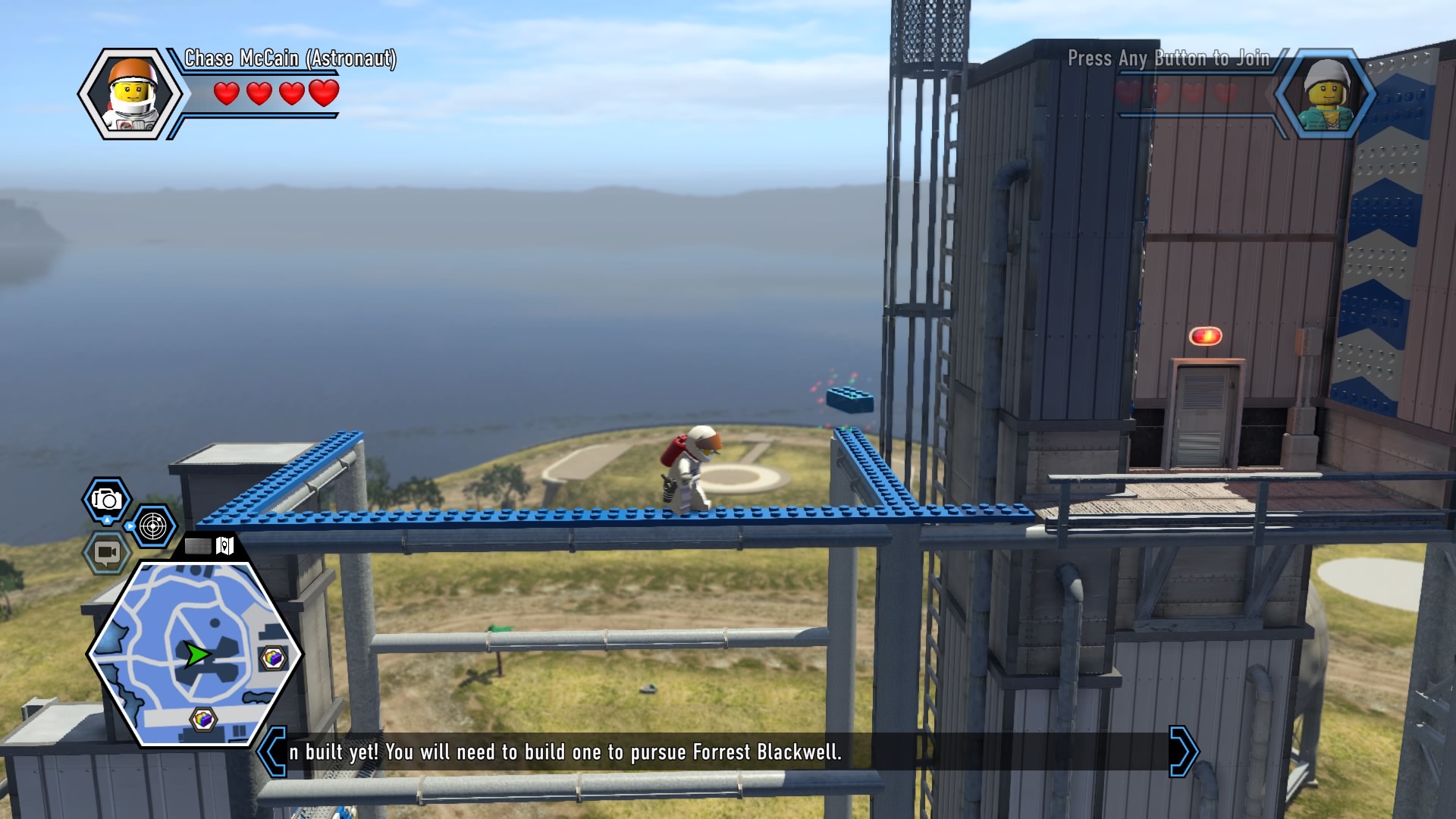 10k Super Brick: Bounce up the wall-jump and climb the blue LEGO pipe all the way up the tall tower to reach this brick.

10k Super Brick: From the pole jump, go up the ramp on the right to find a teleporter pad. Use it to reach another easy super brick.

10k Super Brick: Drop down onto the office roof from the ramp. There’s a ceiling hatch – break it open with the Robber Disguise crowbar. The last Super Brick is found inside. Use the button in the office to open the exit door.

That covers the 50,000 points you need! That completes the shuttle and makes the level marker appear. Climb the launch tower, step into the shield, and you’ll take a flight straight to the moon. This is the big one! 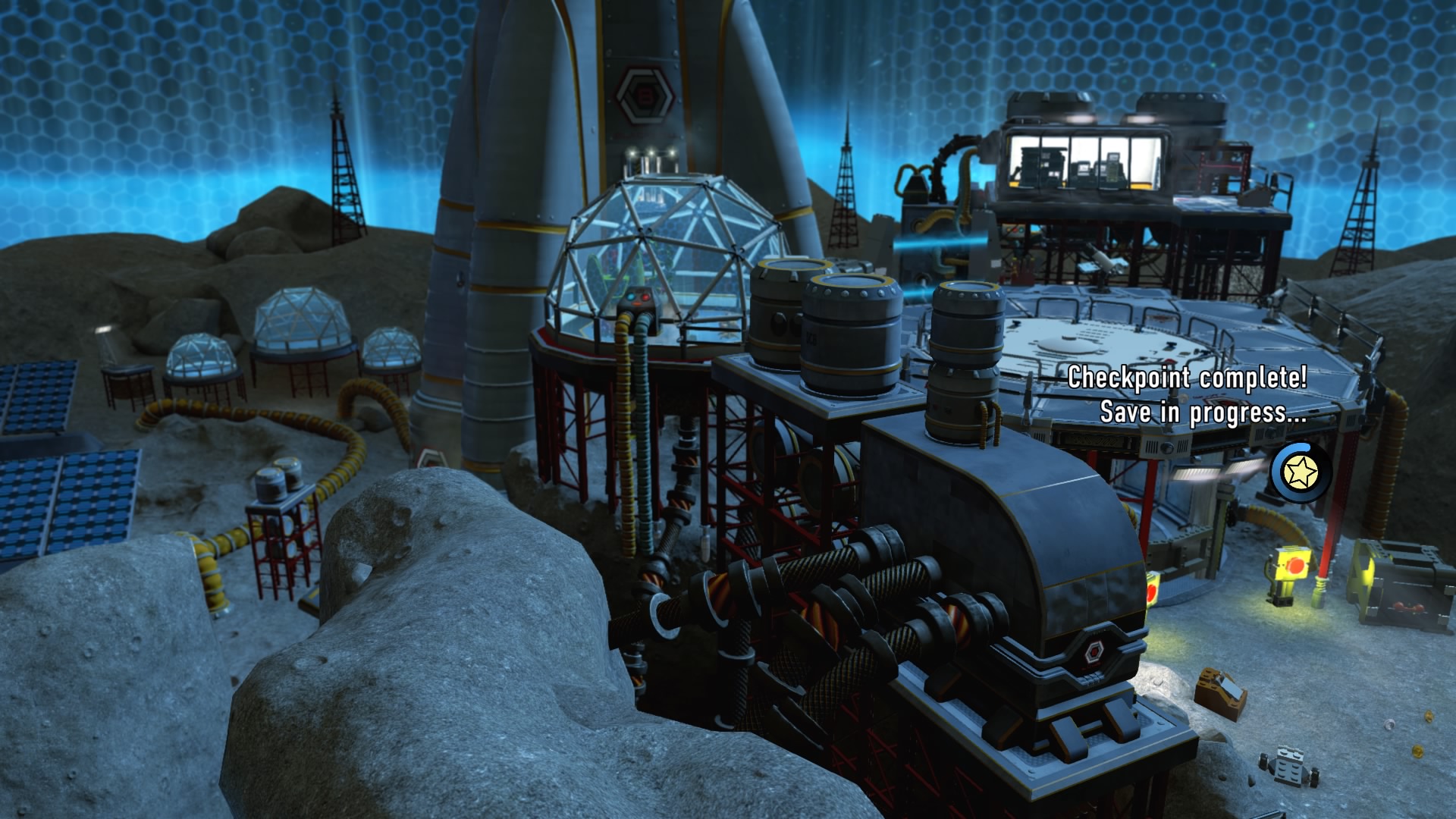 After a quick trip (The Moon is very close, and very small. Don’t tell anyone.) Chase lands on the moon and infiltrates the massive magic bubble that surrounds Blackwell’s Moonbase.

To get started, smash the two LEGO crates in the starting area. Construct the hopping bricks to create a button on the lift. Stand on that button to ride up, then interact with the Super Jetpack hover marker – use the red stud circles that appear to jetpack hover across the gap on the right.

On the second platform, some space-jerk shuts off the energy bridge. Take care of the leftover enemy, then use the second Super Jetpack hover ability to cross over onto the third metal platform. You don’t even need that lame energy bridge. Flying across, you’ll find that the lift is out-of-reach. Fly across the gap to the right to reach a platform with a button. Push that button and lower the elevator. 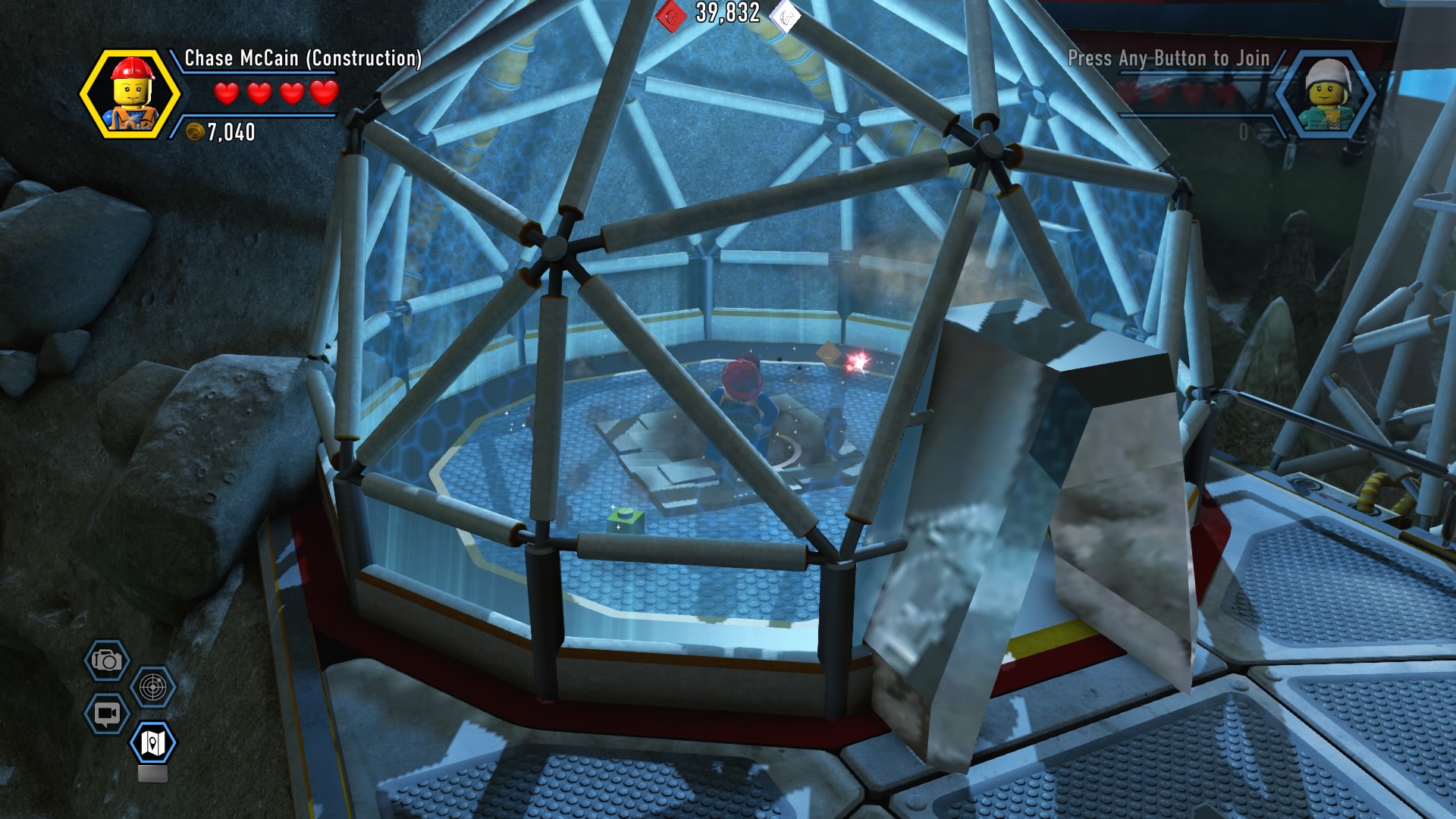 Use the elevator switch and ride up to the dome-like structure. There’s a LEGO metal door blocking your path. Smash the crates to the left of the metal door and collect the TNT, then place it, to explode your way inside the dome.

Inside the dome, use the Construction Disguise to destroy the plants and drill through the LEGO floor. Use the drill marker underneath the wiggling blocks to cut a water pipe, creating a powerful water fountain that helps Chase reach the ceiling hatch.

At the top, move right to find two red light switches. Both red lights are protected by a swarm of space soldiers. Defeat them all with grapple moves, then jetpack to the right to find another dome on a platform. You’ll need to find a Color Swapper and get green for your Color Gun. Let’s get started on that. 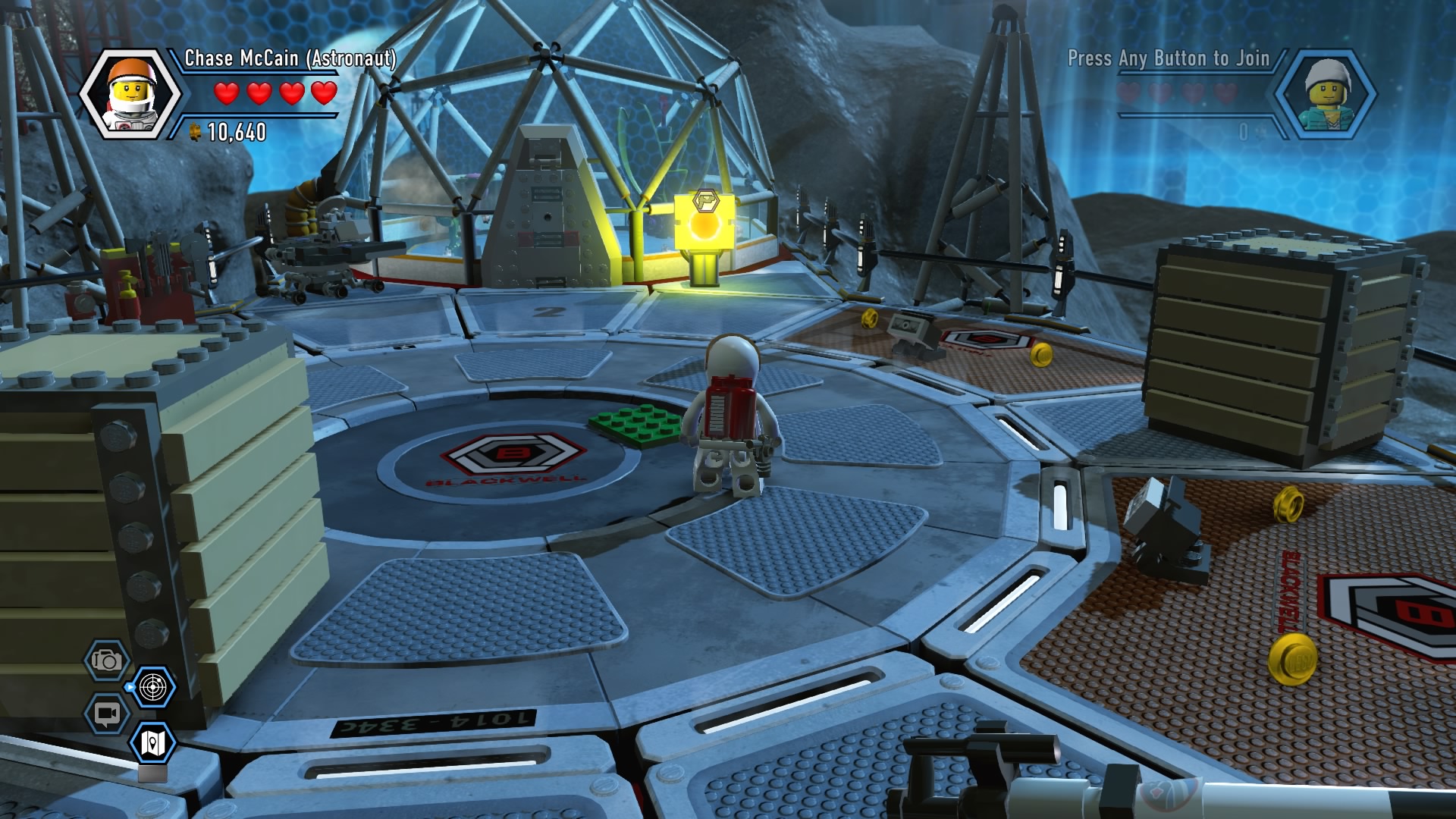 Smash both large wooden LEGO crates on the platform (with the dome building) – one contains a Space Crate, and the other has the parts for a Color Swapper. Complete the Space Crate Simon Says game to summon up a bunch of parts, then build the Color Swapper. Collect the green color and shoot the red switch on the dome to open the door. Inside that dome, grab the LEGO crate and place it on the green marker. The pile of bricks on the platform will start to hop. That’s your cue to construct a Moon Buggy!

Drive the Moon Buggy onto the red LEGO platform to reactivate the energy bridge, allowing you to drive the buggy to the gate with two red light switches. Make both of those red lights green using the Color Gun to open the gate, then drive onto the elevator.

Up the elevator, the camera will pan up to show a small interior with a control lever. Use the Astronaut Disguise jetpack to fly up onto the platform with the office, then bust open the door with the Robber Disguise crowbar. Activating the lever will make another vehicle activation pad to appear. Drive your Moon Buggy onto the pad to activate the energy bridge to Blackwell’s rocket in the distance. 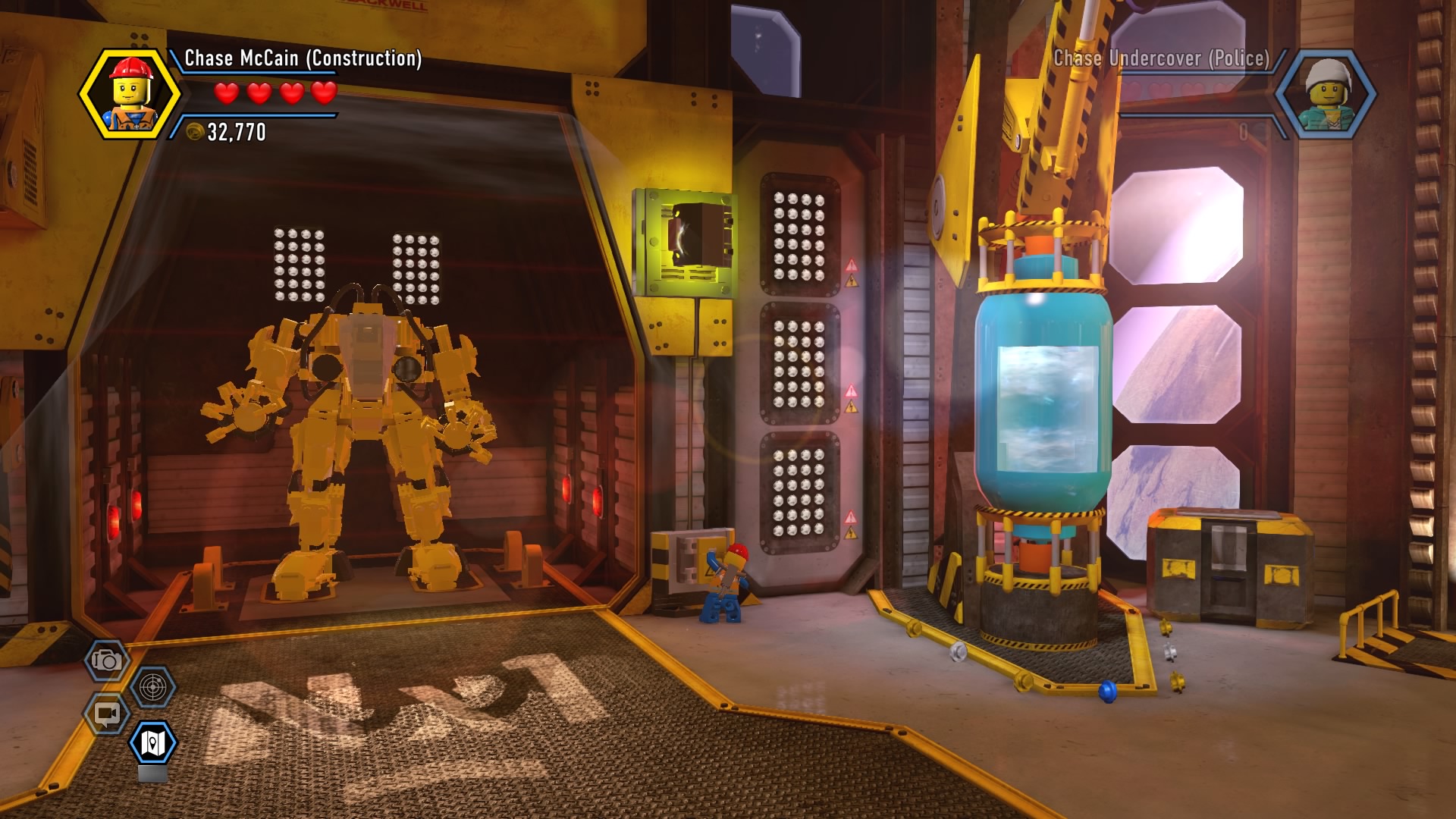 Chase is now in the heart of the moonbase. The first chamber is surprisingly spacious, making it especially difficult to tell exactly where you need to go first.

From the starting spot, move left and repair the fuse box to make a green light button appear at the mech bay. Yes, there’s a mech, and Chase obviously needs to pilot it. Before you can do that, you’ll need to shoot the big green light with the red Color Gun to deactivate the laser grid. So – we need to find a Color Swapper next. 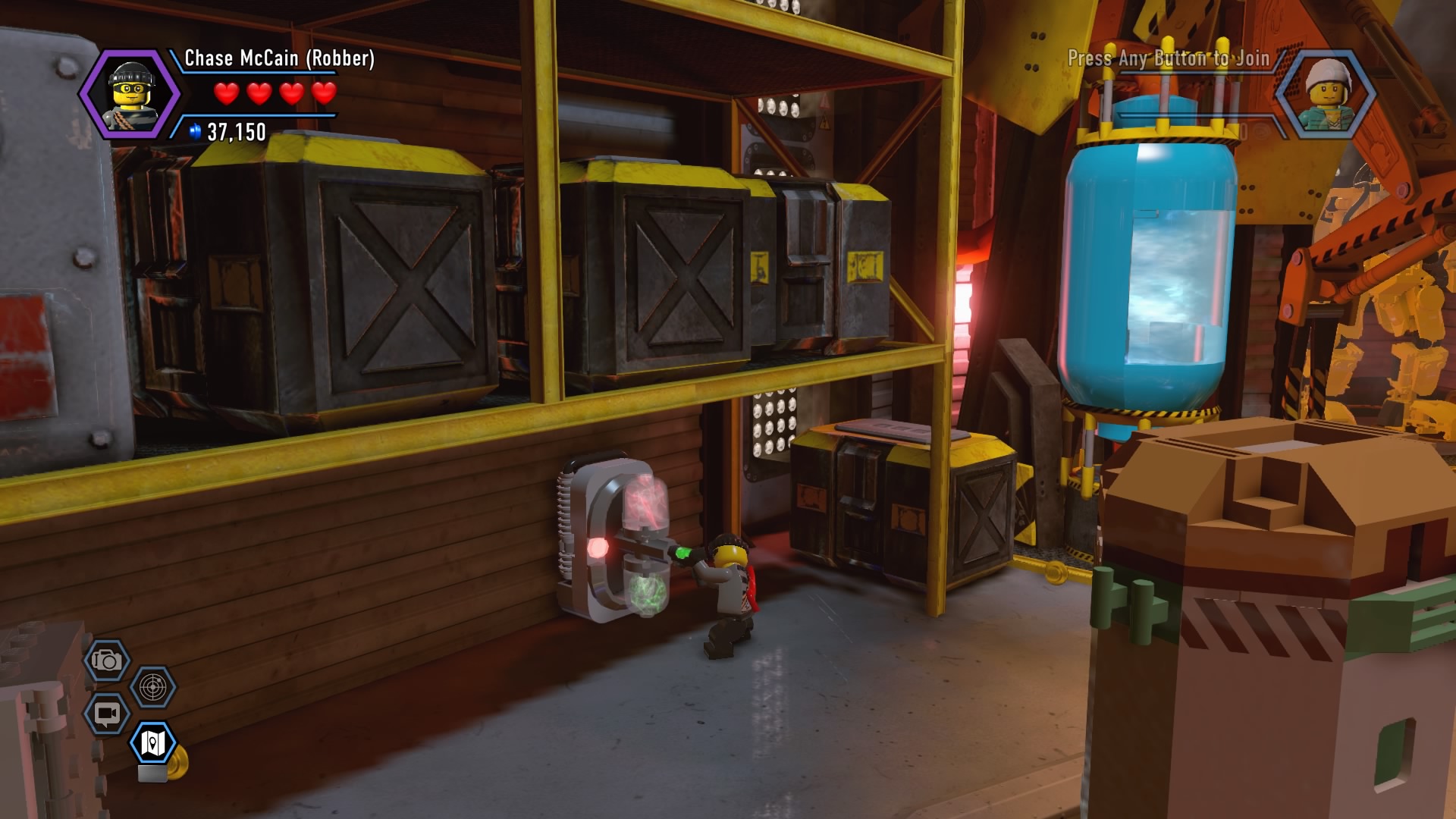 Luckily, there’s one pretty close by. Move left of the mech bay, and look underneath the yellow shelves (past the big blue generator thing) to find a Color Swapper on the wall. To access it, simply smash the LEGO crate. Now grab some red, shoot the big green button, and pilot the mech!

The mech isn’t for fighting, it’s for solving a puzzle! Use the big control marker to the right of the newly opened door to access a power rerouting minigame. The goal is to send power into both nodes. To do that, simply reroute the laser – move the panel to the right of the power starting point so it goes up instead of down, then go from one panel to the next until it connects up to the lower note on the right side of the grid. 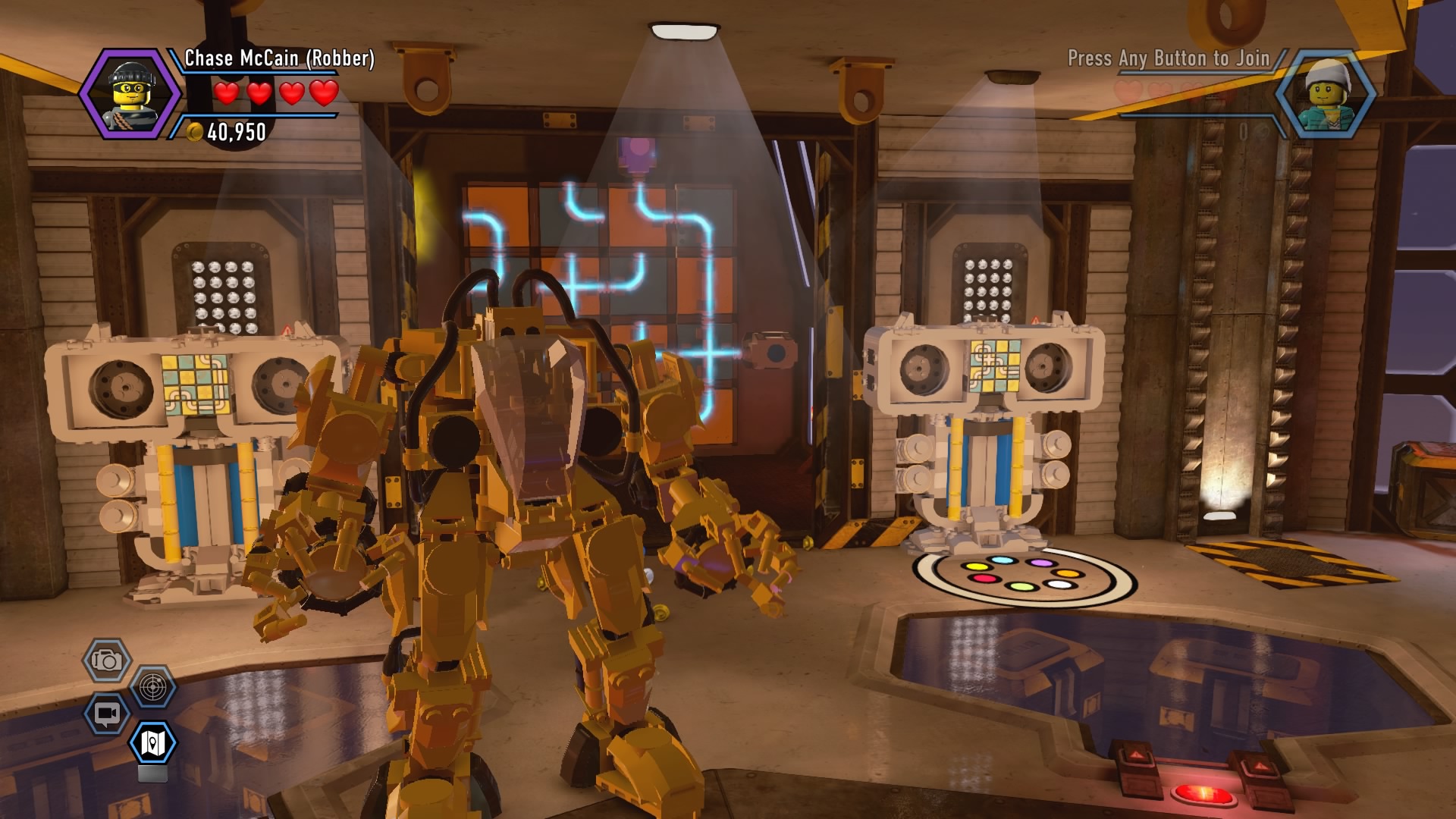 Complete the puzzle, and the rocket will take off. Chase is returning Blackwell to Earth where he can be arrested, but Rex Fury has other plans. The criminal appears riding a tricked-out robotic T-Rex! But, thanks to some accidental exposition, Chase learns that the blue energy tanks are critical to powering the Moonbase. 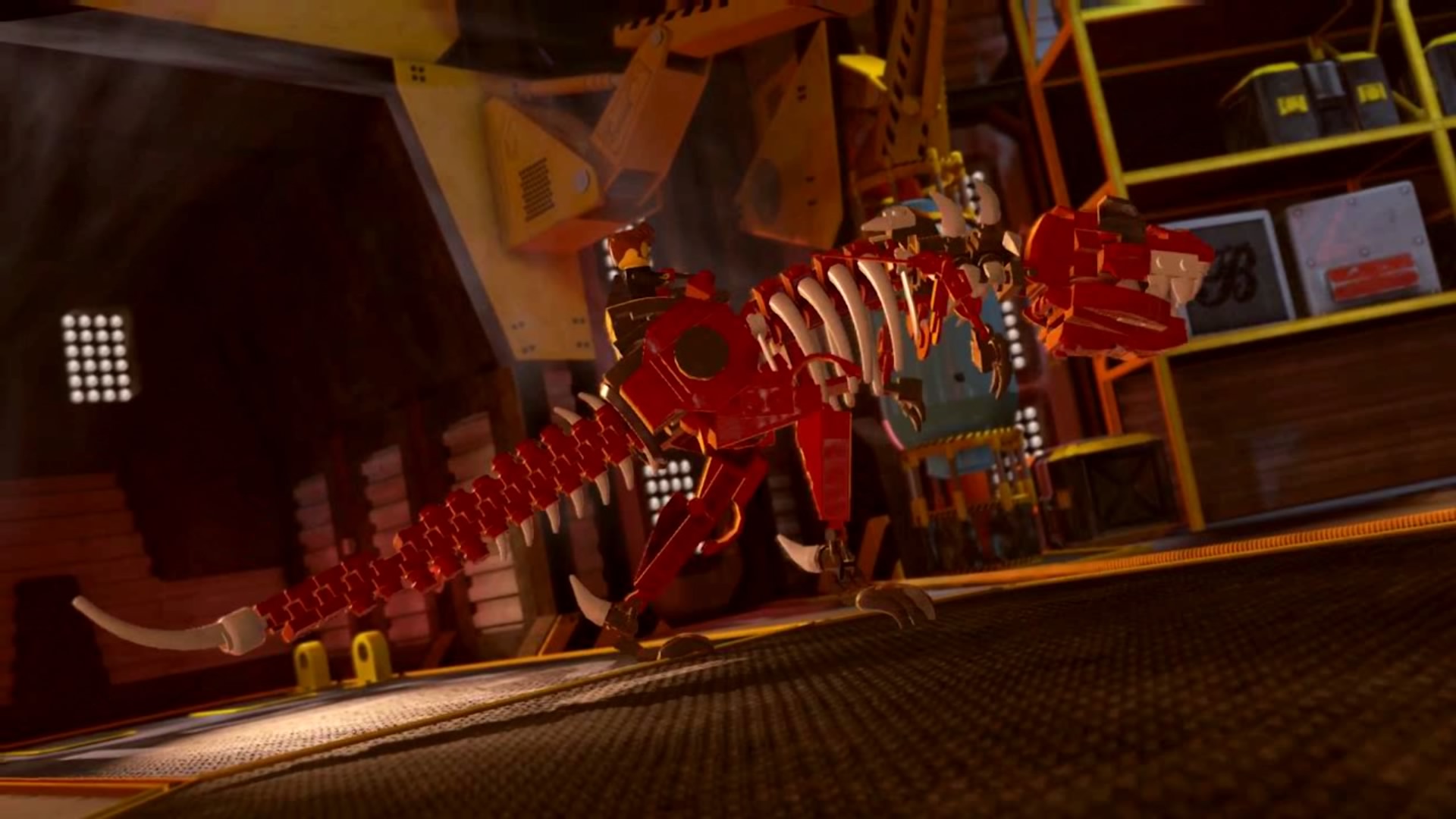 Don’t even think about approaching Rex! He’ll knock your mech away with a powerful swing of his prehistoric tail. Instead, grapple one of the large barrels in the foreground and target Rex Fury while holding it – it’s just like aiming the Color Gun. When Rex is stunned, approach him and grapple, then interact with the floor to pick up and throw the T-Rex bot into one of the energy containers.

For the second phase, you’ll have to time when you grab the giant barrels. Rex stomps the ground, creating a shockwave. Jump over the shockwave, then grab a barrel and throw it at Rex. You can’t jump while holding a heavy barrel, either.

Take down all three of Rex’s hearts, and Blackwell will retreat. He separates the Command Module and sets your section to self-destruct! The explosion destroys your mech, and leaves Chase on a chunk of rocketship that’s spinning out of control on its way down toward Earth’s atmosphere. This is bad! 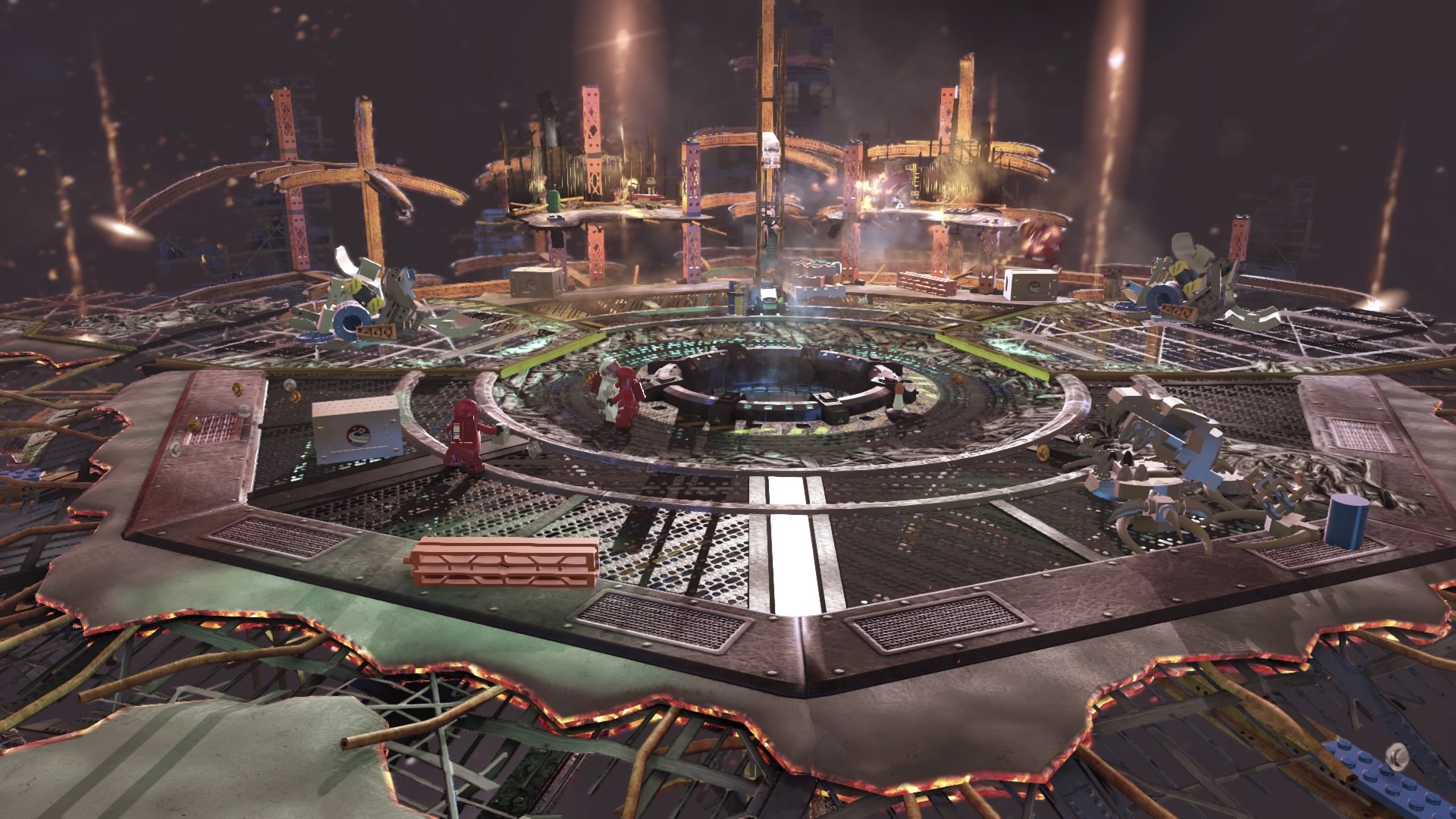 Your platform is now mostly destroyed and wildly careening through space. More brave red-clad space soldiers arrive to fight. Defeat them one-by-one until Rex Fury returns! He’ll bring another gang of minions. Grab one, and throw the goon into Rex Fury’s floating energy shield to knock him down.

Now Rex and Chase can fight one-on-one. Too bad Rex is still way, way stronger than Chase. Trying to attack Rex won’t work, he just punches Chase to the other side of the space debris arena. To hurt him, either counter one of Rex’s attacks, or grapple and throw Rex. 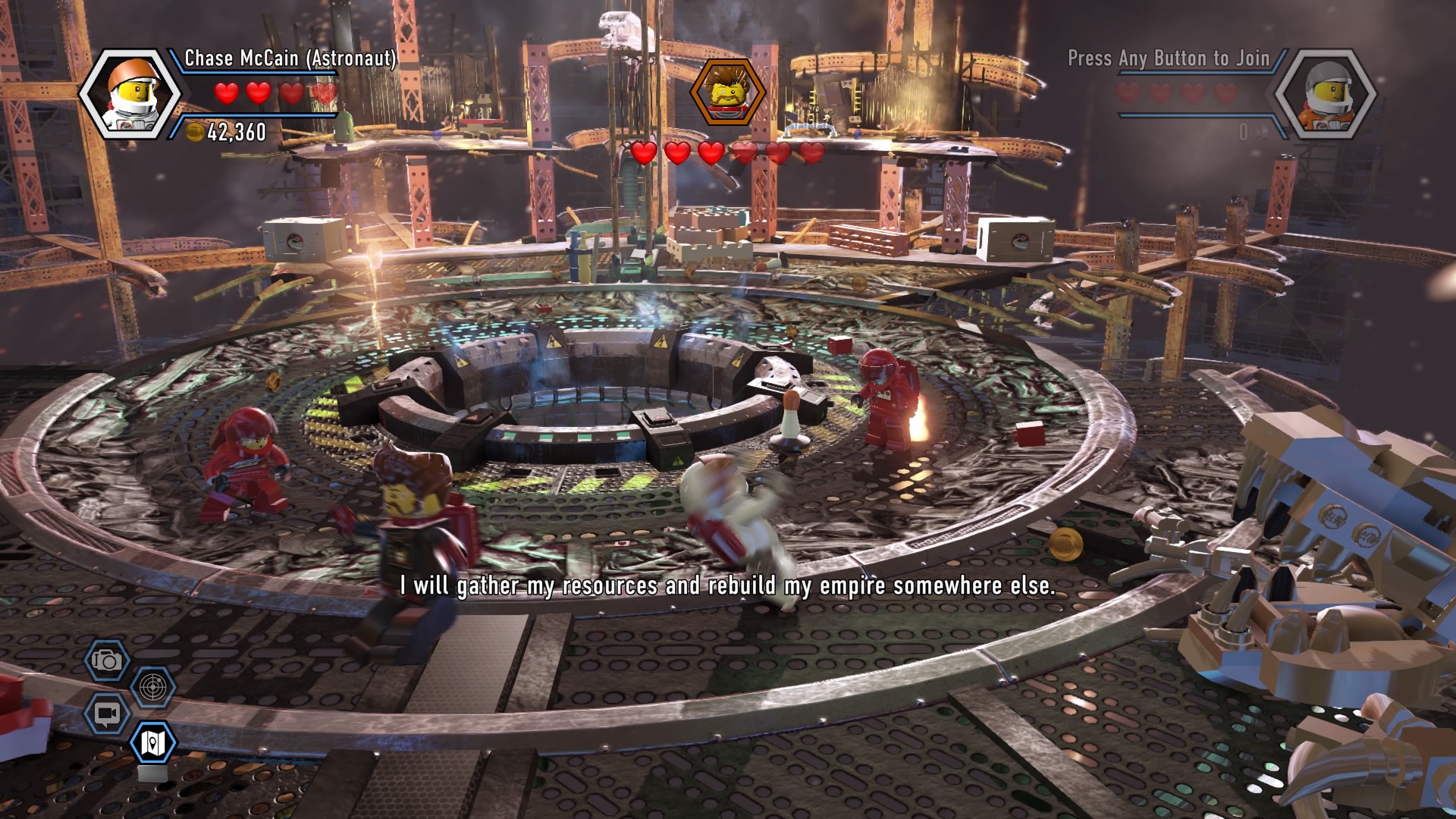 After taking a hit on the ground, Rex will reactivate his shield. Grapple another guard and throw him into Rex, then repeat the process. When Rex is on his last heart, knock him down (with counters or grapples) then snap on the cuffs. Rex Fury is finally arrested!

With Rex Fury arrested, the pair are lost in space as the Command Module fails. Now it’s up to Chase to reach Natalia! You’ll enter one final, epic diving sequence. Like always, follow the stud circles and enjoy the scenery as Chase falls from space, through the atmosphere, and back into the Command Module. Of course, he arrives just in time to rescue Natalia and the Professor.

And that’s it for LEGO City: Undercover. There’s still so much left to explore, collect, and unlock! The story might be over, but that’s just the start of your adventure in LEGO City.