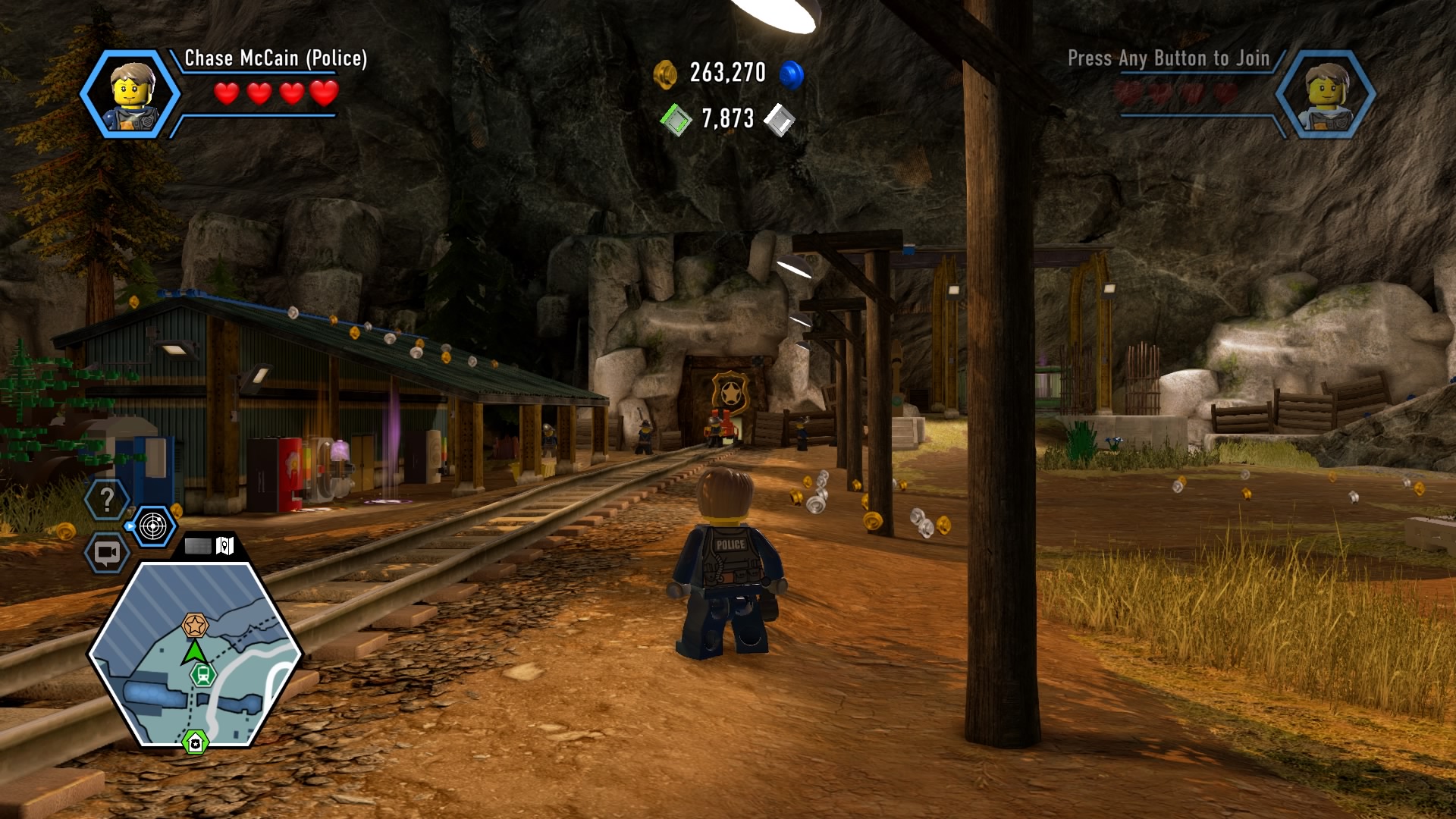 The third chapter of LEGO City: Undercover is unusually long, so we’ve split the guide into two parts. Here we’re covering the Bluebell Mine case, with tips to solve every section.

Leaving Albatross Prison Island behind, Chase takes his first ride on the city metro. After that, it’s a straight shot to the Bluebell Mine — located in scenic Bluebell National Park. The mine is a dangerous place, filled with Rex Fury’s goons, and Chase will have to unlock the power of the Miner Disguise to make progress.

Back in the open-world, follow the waypoint to Cherry Hill Train Station and use the ticket machine to travel to Bluebell National Park. For each station you unlock, you’ll get another fast-travel point. That makes traveling long distances way faster.

Arriving outside the Bluebell Mine, the miners won’t let you inside! That means you’ll need to clear out the workers with the steam whistle, signaling that their shift is over. Go break into the office to the right of the mine tracks with the Robber Disguise. Open the safe, grab the valve and place it (and turn it!) on the steam whistle to clear the mine entrance. 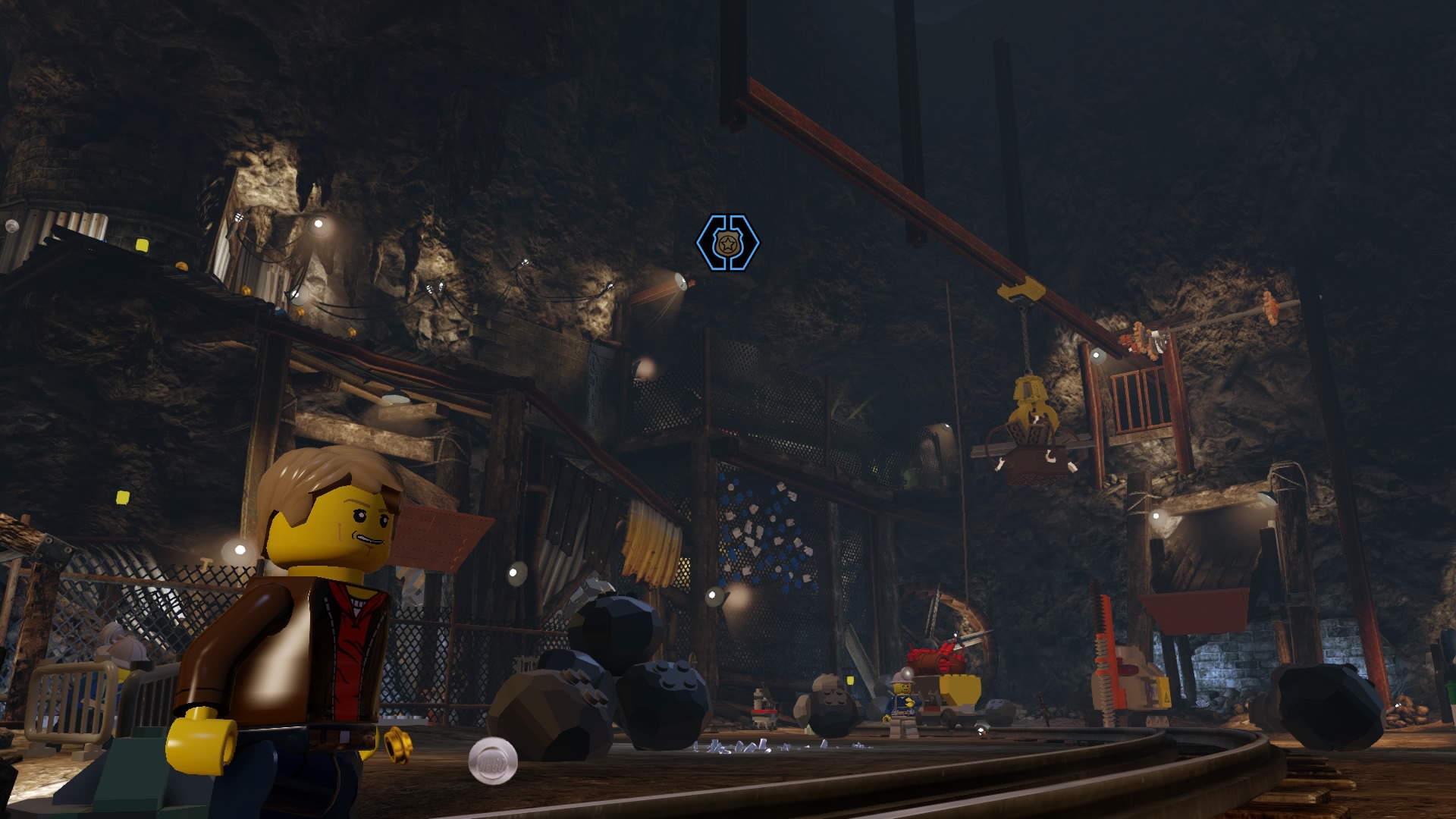 Chase needs to find Ol’ Stinky, but Rex’s men are already here! They set off a charge and escape deeper into the mines. Before you can go after them, Chase needs to get some safety gear.

Swap to the Robber Disguise and break into the door to the left of the explosive-filled minecart. Pull the switch and build the hopping bricks into a crate on the pushable LEGO floor. Move the crate left and use it like a stepping stool to reach the stairs on the left.

Move left and climb the blue / white LEGO. At the top, swap to the Police Disguise and grapple across the gap. Smash the blue / white objects to create a catapult pad. Ride it across, then bust open the office door with the Robber Disguise crowbar. Use the locker and you’ll unlock the Miner Disguise! 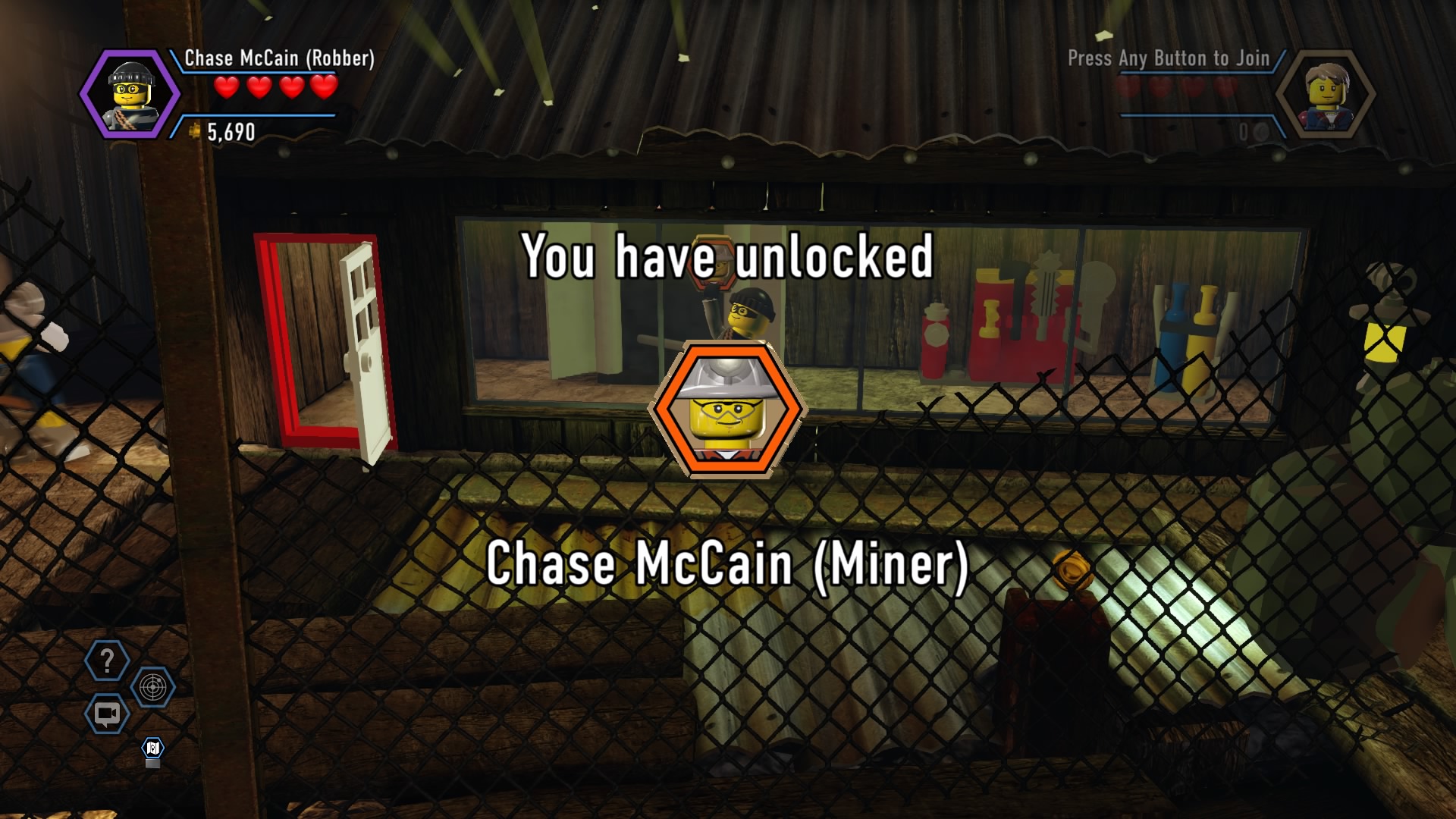 With your new Miner Disguise, smash the LEGO boulders to the right of the office door and slide down the rope. At the bottom, bust the rocks to the left to get a switch handle. Take the handle and place it on the switch (where the green marker points) – attach it and turn the handle to get a pile of hopping bricks.

Those hopping bricks create a TNT Dispenser. Only the Miner Disguise can access these – use it to get a TNT charge. Take the dynamite and place it in the barrel next to the spinnery-whatsit on the right side of the room.

Now Chase can fix the central track. Push the cart to blow open the path deeper into the mines – after you deal with the thugs that appear!

Continuing into the next room, defeat the goons and grab a dynamite bundle from the vending machine. Place the TNT in the barrel next to the Port-O-John on the edge of the cavern cliff. When it explodes, build the blue / white blocks into a LEGO dive board. 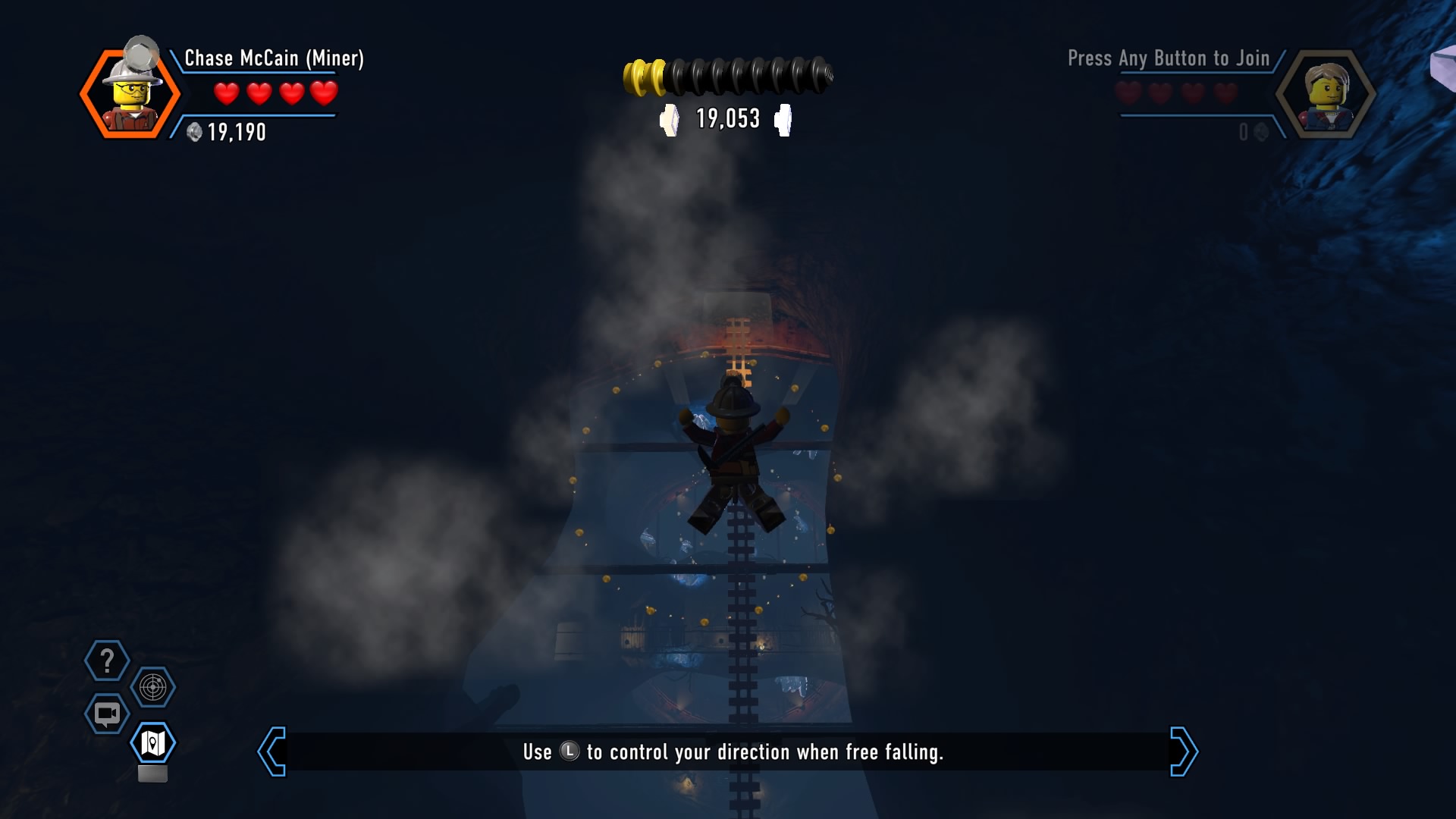 At the bottom, smash through the boulders to enter a new chamber. Here, you’ll need to collect 22,000 Super Bricks to complete a Cable Car Super Build and cross the gap. There are plenty of Super Bricks in this room – or you can use Super Bricks you’ve saved in the open-world to instantly buy your way ahead.

That’s everything, even if you went into the mine without a single Super Brick! Complete the Super Build and ride across! But the ride doesn’t last long. Rex’s goons ruin the cart, dropping Chase down into a watery shore. 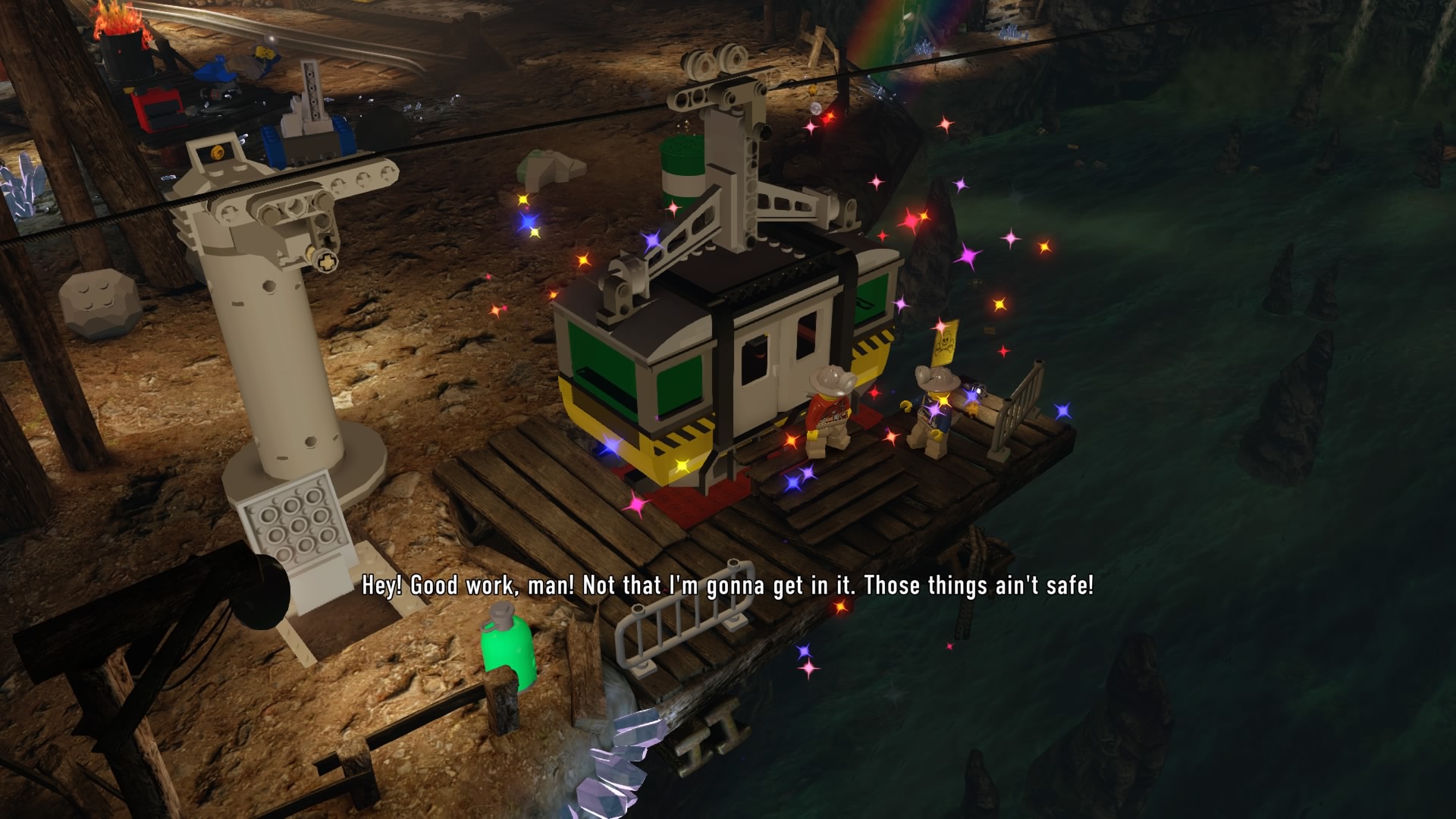 Hop across the islands to reach the blue / white LEGO climbable wall. At the vertical ascent, wait for the boulder to drop before climbing up, or chase might get a face full of rock on his way up.

At the top, defeat the goons and then enter the wooden path in the back-left to find a grapple point. Swap to the Police Disguise, zip up, and climb on the wall without dropping down into the grinder. On the conveyor belt, hop over each rock. Bash through the boulders to encounter another group of enemies.

Here, you’ll find a blue / white metal LEGO booth. You can only destroy it with TNT, so let’s get some. Smash the crates / LEGO boxes in the upper-left corner to construct the hopping bricks into a Dynamite Dispenser. Grab the bomb and plop it into the barrel by the metal LEGO booth.

When the dynamite explodes, collect the hopping bricks to create a catapult platform Ride it up, then move right and drop down through the hole in the shed ceiling. Inside, use the Robber Disguise to crack the safe.

Grab the recorder to complete the level and the chapter!