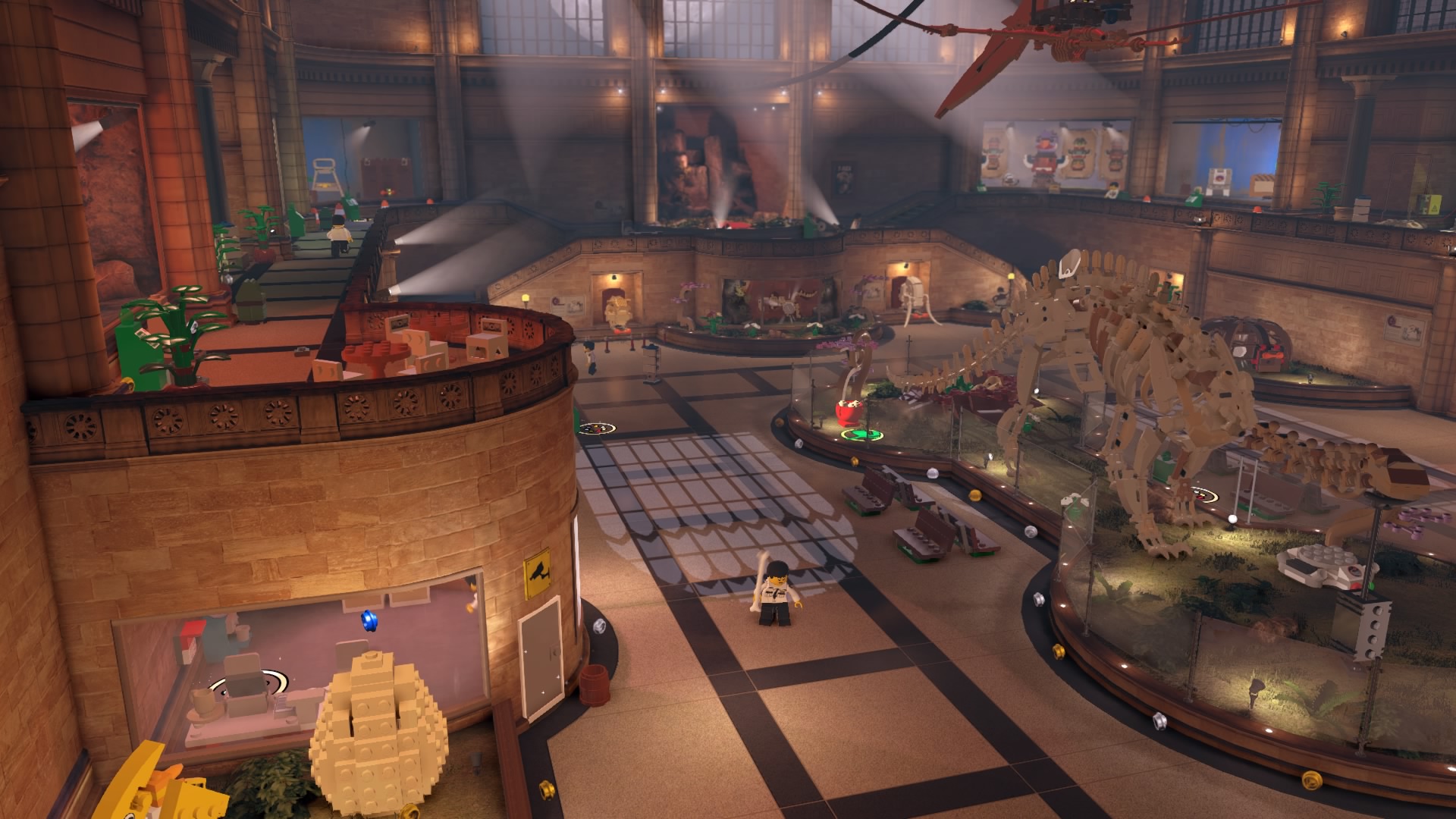 Chase is ‘Back on the Case’ in Chapter 10 of LEGO City: Undercover. This time, we’re covering the complicated Uptown Museum heist mission.

Using your new Farmer Disguise, Chase will use a homegrown Super Chicken glider to reach the museum rooftop before infiltrating the exhibits. Vinnie, Chase’s current criminal boss, wants a robotic T-Rex. There’s only one of those, and the heist ends with an incredible rampage to LEGO City airport.

Chapter 10: Back on the Case

Now that the pig interlude is over, it’s time to take a trip to the Uptown museum. The museum is locked up, so Chase needs to get onto the Art Gallery rooftop and use the convenient Super Chicken marker to glide to the level entrance.

To the left of the entrance to the Art Gallery, water the red LEGO pot with the Farmer Disguise watering can to climb up and reach the Free Run blue / white LEGO obstacle course. Smash the vent and slide to enter the elevator lobby. Grab the green Color Swapper and shoot the red light with the Robber Disguise Color Gun to ride up to the roof.

Up top, water both red LEGO pots to create a pair of flower platforms. Cross the metal platforms up and around to the next roof. Smash the three LEGO objects in the center to create a giant fan, letting Chase ride the up-wind. On the slippery slopes, sprint up the LEGO blue / white surfaces to reach the top.

At the top of the slippery slopes, smash the LEGO fan and build to create a complete blue / white climbing wall. You’ll finally reach the Super Chicken marker with a view of the museum rooftop. Swap to the Farmer Disguise and glide through the green stud circles to land on the museum roof – climb onto the tower, zip up with the grapple hook, and bust open the crowbar door to start the level. 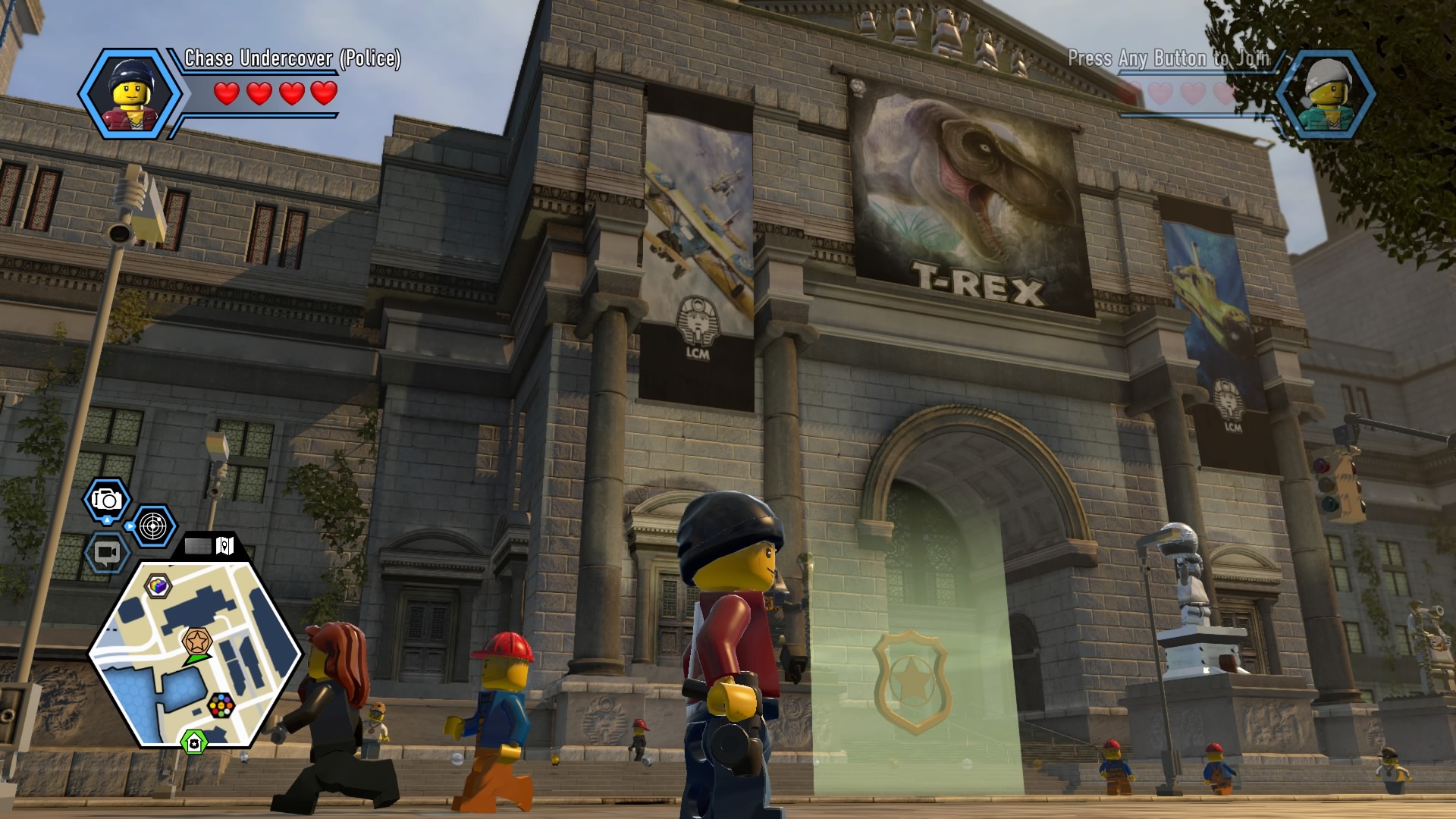 Vinnie has a new job for Chase – he wants the giant robotic T. Rex. That’s a very extravagant request, but if Chase wants to find out who Vinnie is working for, he’ll have to complete the heist. Crack open the crowbar door to enter the gift shop and grab switch handle. Place it on the waypoint and pull the switch down.

The switch moves the curtains away from a F1 Racer! Pull the grapple handle to free the race car, sending it crashing into the wall to the far right of the room. Build the hopping bricks on the far right (near the LEGO train set) to create a TNT vending machine.

Take a dynamite bundle and place it in the barrel at the metal rocks behind the train tracks in the museum display area. That leaves a couple hopping bricks. Build to move the train out of the way and reveal two floor buttons.

Smash the LEGO object to the right of the coal furnace and build to create a cart. Push the cart onto the first red floor button to reveal another LEGO object you’ll need to smash. Build the hopping bricks and push again.

The metal gate will open on the right side of the tracks – grab the green valve, put it on the cart and turn to create steps up to the second tier of the museum chamber. 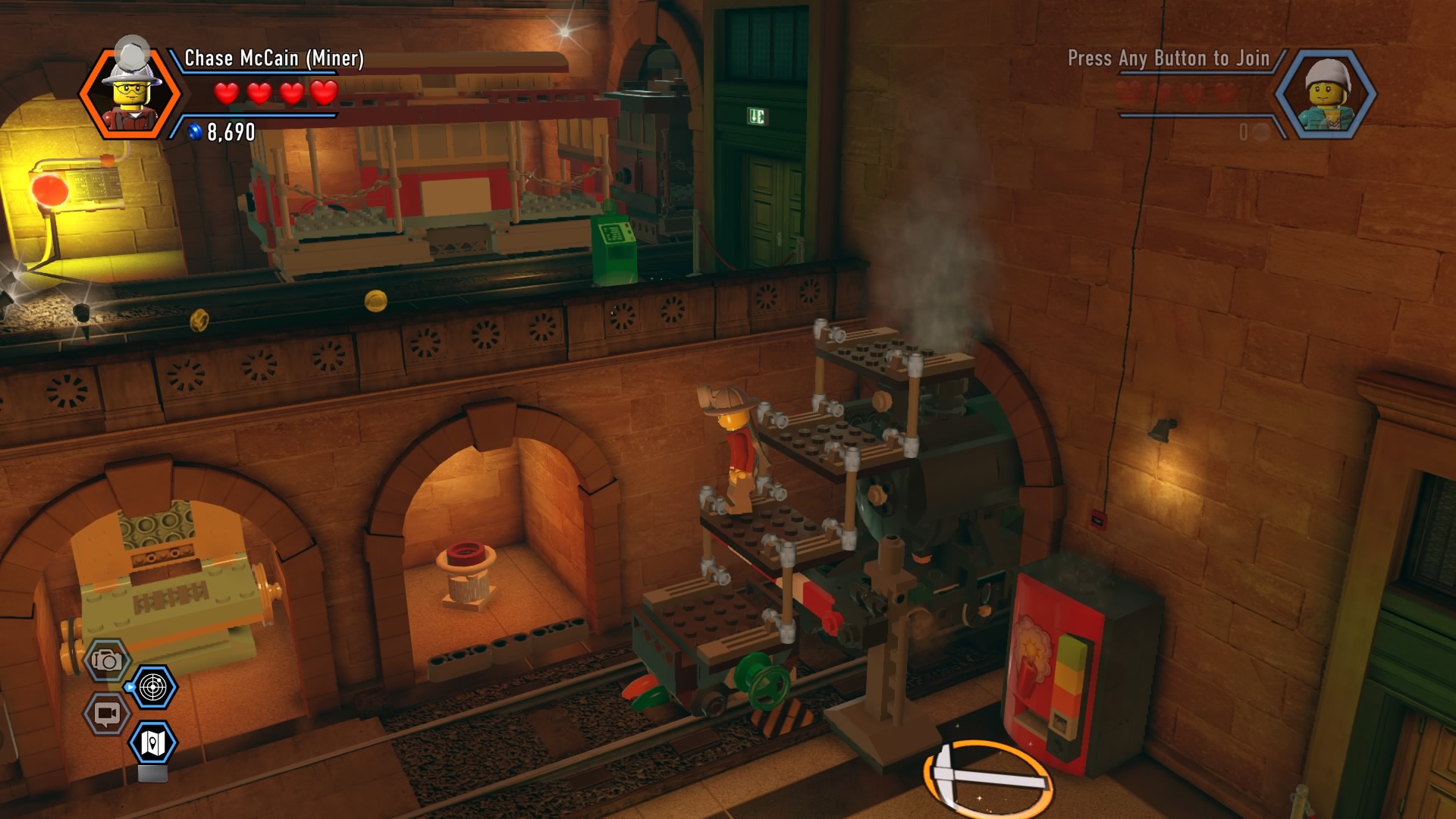 Climb up the cart platforms to reach the higher tier of the museum chamber. Up here, you’ll find a red light, an electrified cage, and an Oil Derrick model on the left. Smash both green LEGO engines and build to create a Color Swapper.

10k Super Brick: Use the green Color Swapper / Color Gun to shoot the red light. Turn that light green (in the track alcove) to move the streetcar. Grab the newly-revealed crystal and deposit it in the LEGO object beneath the upper tier balcony. The green waypoint will show you the way. The machine create a key! Take it and use it to open a gate to a 10k Super Brick.

Back up on the upper tier, if you’ve moved the streetcar, grab the LEGO crate and place it on the green pad at the Oil Derrick display. Complete the derrick and ride the black oil up to another tier of the chamber. 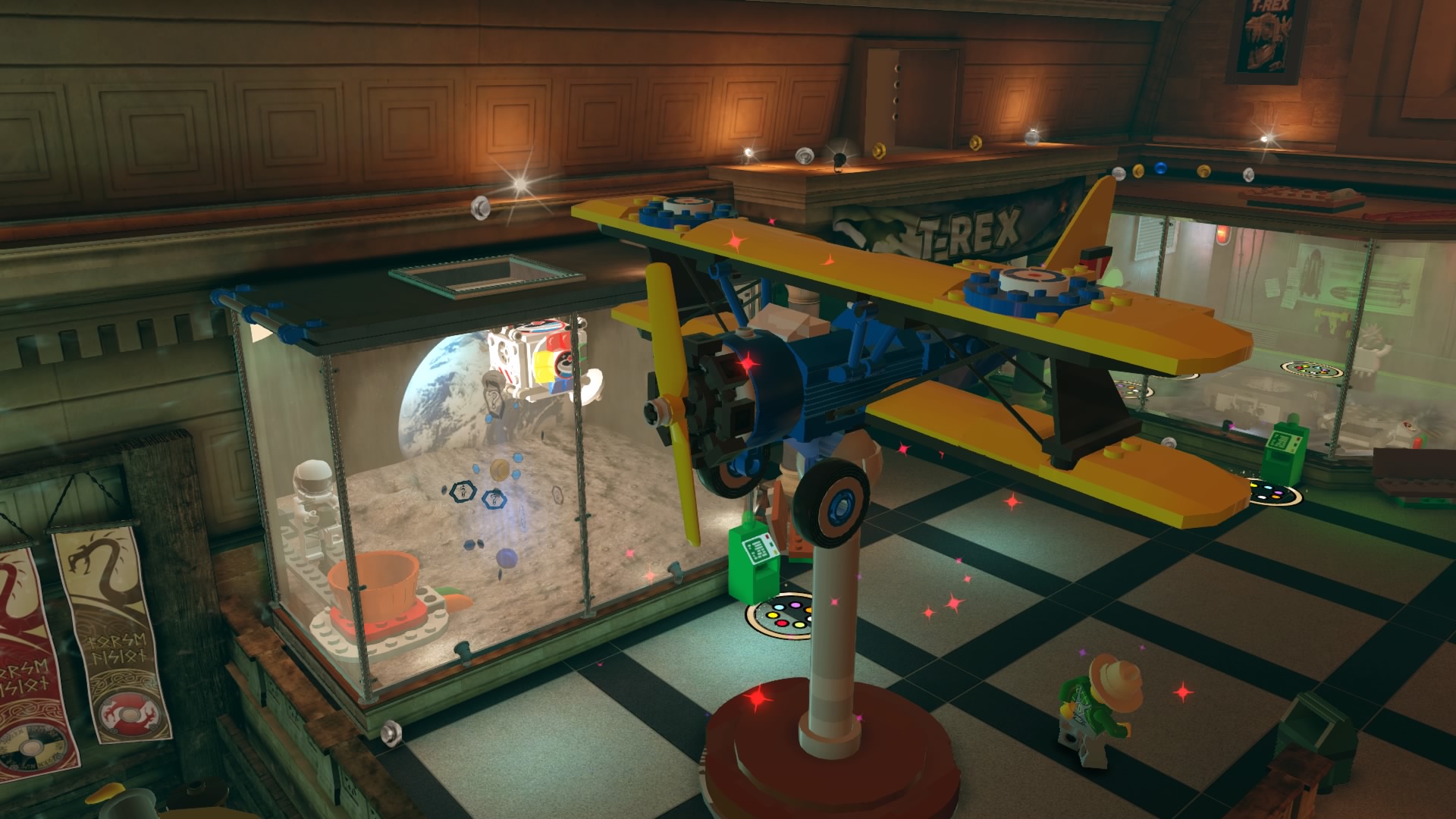 Up above, you’ll find a giant LEGO pirate ship in a huge water tank! That’s pretty fancy – and to the right, there’s an Astronaut exhibit and a… mad scientist exhibit?

There’s also another super build up here. It only requires 21k Super Bricks. There’s an easy 10k Super Bricks near the green exit door, to the right of the space exhibit.

1k Super Brick: Follow the pier to the far left from the pirate ship to find a switch. Use it to make an RC submarine appear! Interact with the circle to take control – move the sub to the 1k Super Brick on the right corner of the aquarium area. Grab it [Cross / A] to deposit the Super Brick, letting Chase collect it after interacting with the surface crane.

Now Chase can complete the Super Build! The wind blows the LEGO ship to the left, dropping the boarding platform so you can get up onto the deck. Climb up, jump onto the museum ledge and run right to find a hatch that drops into the moon exhibit. 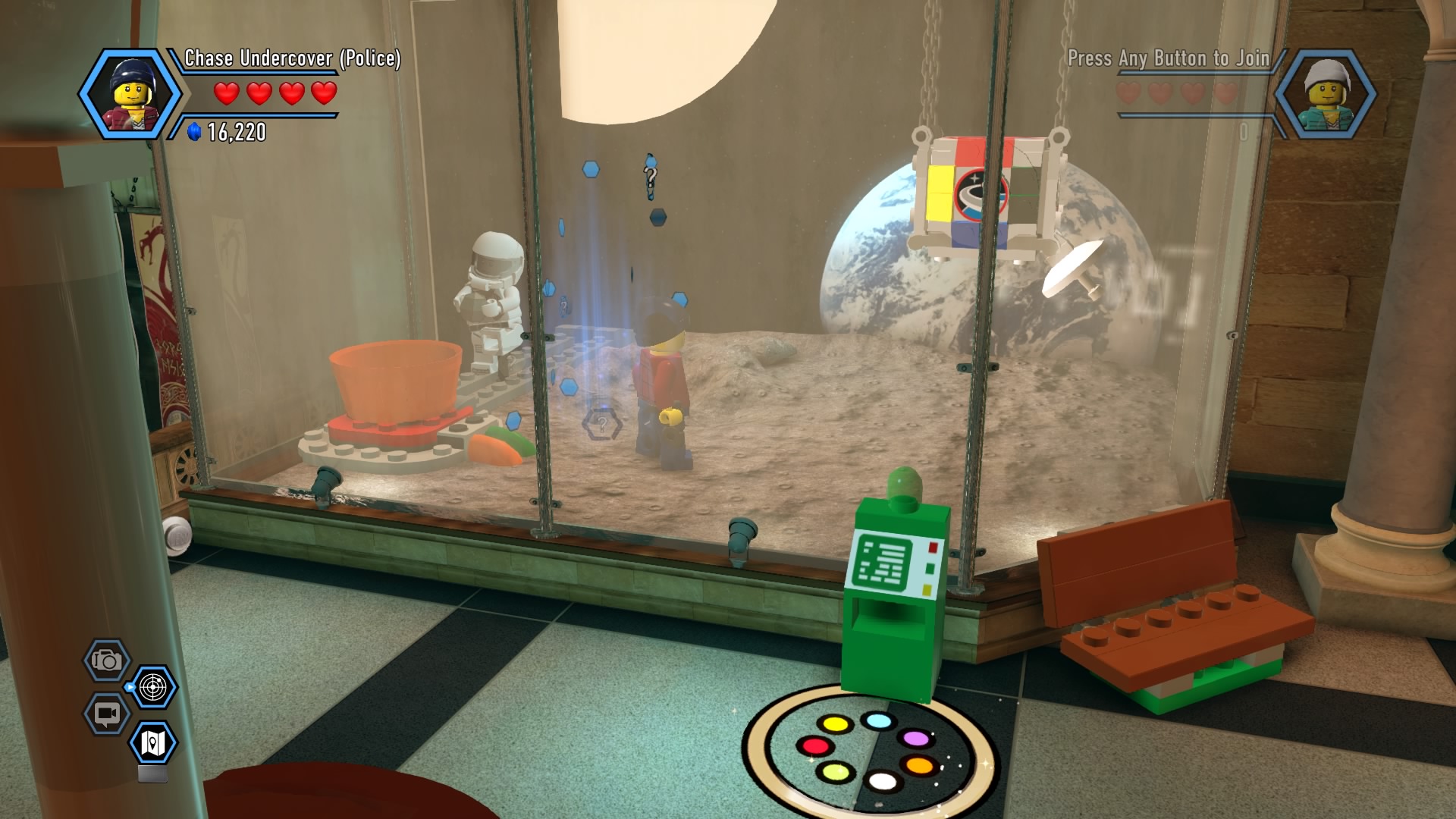 Enter the moon exhibit and interact with the Detective Scan. Reveal the moon rock, place it in the bucket, build the hopping bricks and complete the Space Crate with the Astronaut Costume. You’ll teleport into the Mad Scientist exhibit – pull the handle on the right wall to make a Color Swapper appear above that exit door!

To exit the Mad Scientist lair, interact with the two dials. Stop each dial in the green zone to activate a fan. Ride the draft up through the hatch, collect the red Color Swapper, and shoot the green light on the exit door.

The Dinosaur Exhibit is ahead! But… there’s no T-Rex around. At the far back of the room, there’s a Super Build that requires 30,000 Super Bricks. That’s your T-Rex! But, we’ll need those bricks first.

Let’s get hunting for hidden Super Bricks. Start by smashing the giant LEGO egg near the security room on the left. Use the revealed Detective Scan to get a feather. Take the feather to the right and use it on the stegosaurus skeleton.

Grab the dynamite bundle after the skeleton blasts open the glass. Take it to the left and blow open the security door. Hit the switch to open the exhibits on the upper level. Let’s go check those out next. Go up the steps at the back of the room and move to the left wing of the room.

The first exhibit on the left is totally empty, except for a bunch of LEGO crates. Smash the boxes and crack the safe (Robber Disguise) to find a LEGO crate. Pick it up and take it to the green waypoint. Build and hit the switch to lower the exhibit glass on the right wing too. 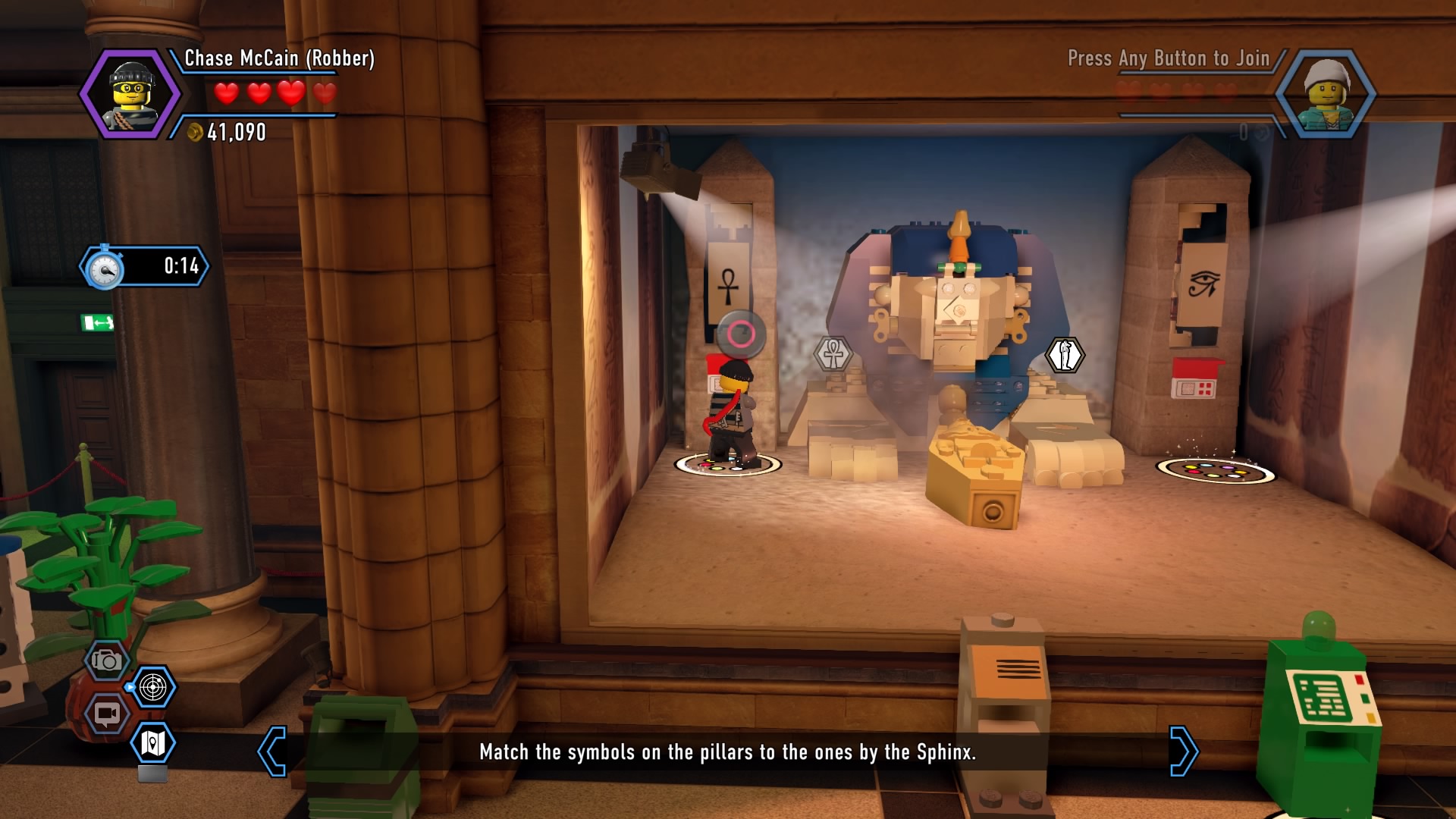 10k Super Brick: On the foreground of the right wing, smash the crate in the Egypt exhibit and build. Next, activate the gray terminal to begin the puzzle – match the two symbols on the left (Ankh) and right (Sarcophagus) to open the tomb.

10k Super Brick: Still on the right side, use the gray switch to spin the totems on the Native American exhibit. When the totems match the pictures on the back wall, step on the red floor button to lock them in place.

10k Super Brick: On the left wing, find the caveman exhibit. Smash the crate and rebuild the caveman LEGO minifig. Activate the gray terminal, then press [Circle / B] to smash all the sections of the spinning wheel. 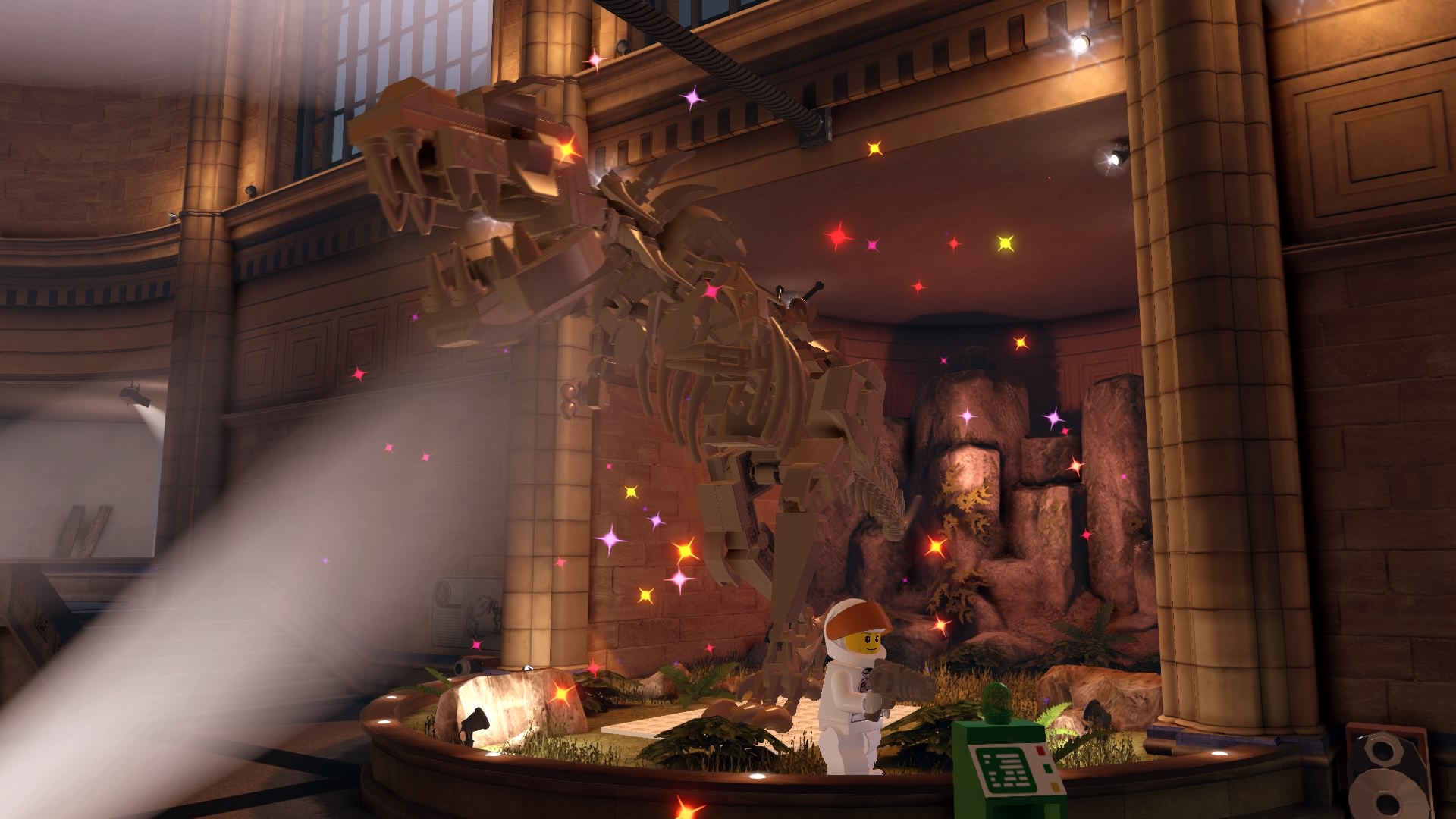 Police Shield: One of the Police Shield parts is found in the left wing of the Dinosaur Exhibit. Smash the brown crate to build a Robin Hood minifig, then use the gray terminal. Press [Circle / B] to launch an arrow. Hit the target to get the shield.

That’s 30k Super Bricks collected. Return to the Super Build and use it to create that robotic T-Rex. Hop on to complete the level!

The chapter isn’t over yet. There’s still another special assignment to complete! Check out the next part of Chapter 10 in the Table of Contents.