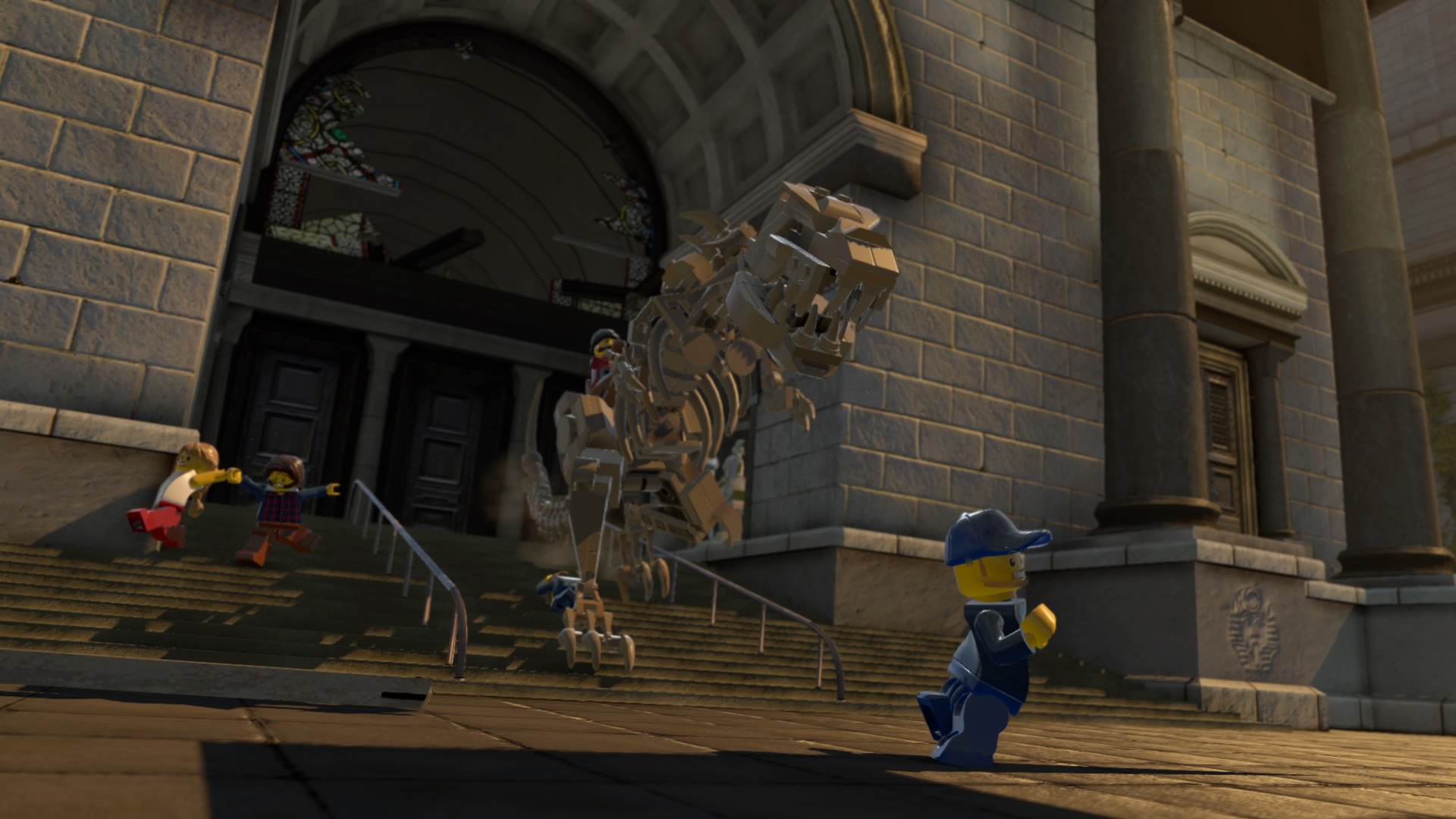 Chapter 10 of LEGO City: Undercover continues (and concludes) with the LEGO City Fire Station level. Say hello to a new disguise, and a new type of vehicle.

The longest chapter yet includes a second Special Assignment that takes Chase to the LEGO City Fire Station. He’ll have to train before stealing the Fireboat from the docks — and that isn’t everything you’ll be getting up to.

Natalia gets into even more trouble, forcing Chase to rush into a rescue mission at the local hospital. It all ends with a new vehicle type; you’ll get to take command of helicopters after this chapter is over.

Chapter 10: Back on the Case

After escaping the museum, Chase now has control over the robotic T-Rex. Vinnie wants Chase to drop the T-Rex off at the LEGO City airport – but cops are swarming. To get rid of your (constant) police problems, use the T-Rex attack powers. Press [Square / X] to stomp or swing your tail, or press [Circle / B] to roar and destroy everything in a small area.

After delivering the T-Rex, Vinnie has another favor to ask – this time, Chase needs to steal a boat from the Fire Department in Festival Square. 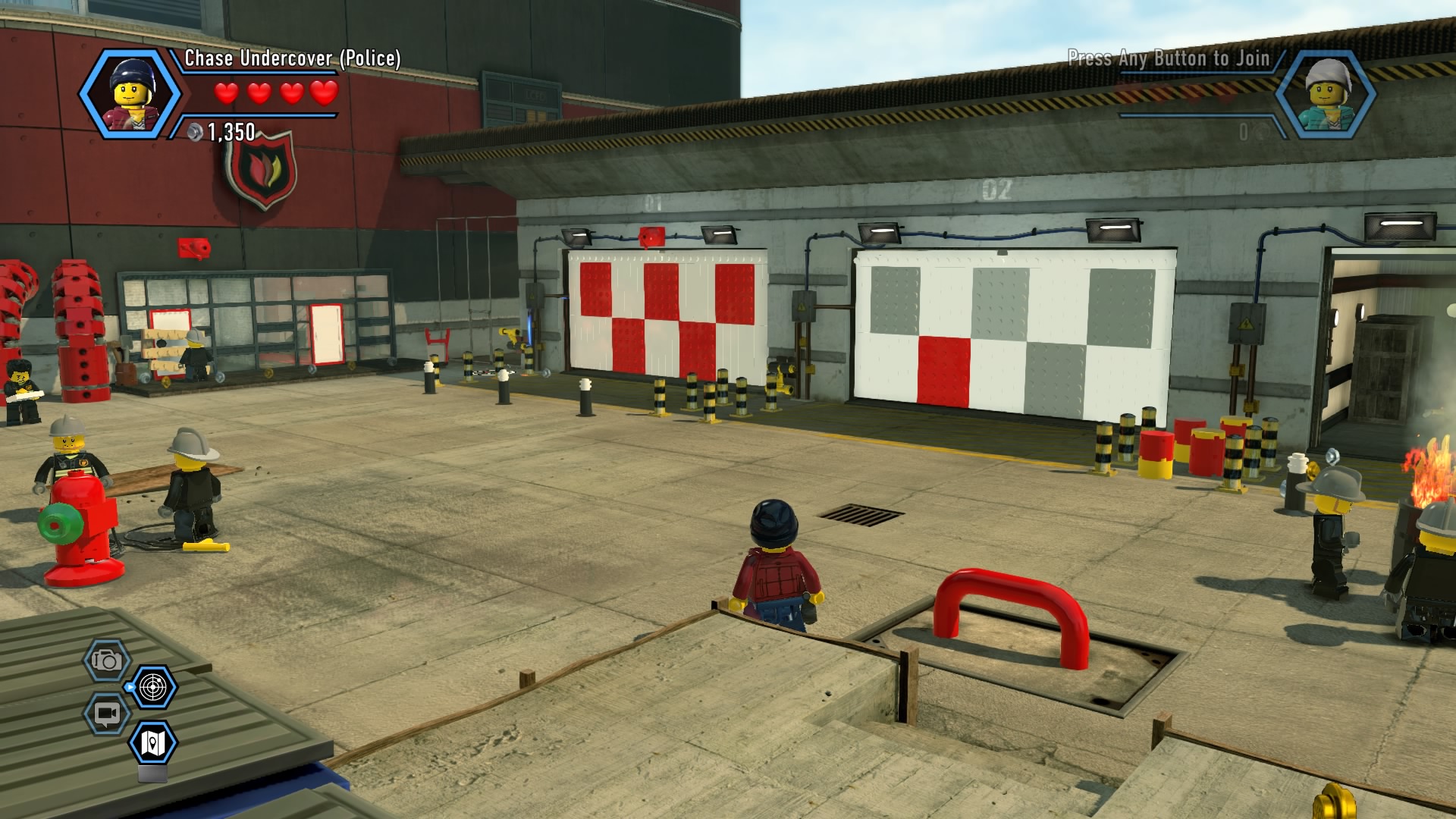 First thing’s first – Chase needs to get Garage #2 open to collect his very own firefighter uniform. Pull the lever on Garage #1 to open the door, then smash the LEGO crate and construct the hopping bricks to create a Space Crate. Complete the mini-game to leave a bunch more bricks in the garage to the far right – build these to get a red Color Swapper.

Build and get red for the Color Gun (Robber Disguise) – now shoot the Garage #2 door with red. Hit all four panels to activate the lever. Pull that lever and open the locker to unlock the Fireman Disguise.

Put out the fires in the left corner to unlock the fireman axe! Now you can break down boarded-up doors with the axe or put out fires with the extinguisher. Bust open the door (with the red axe marker) and grab the green valve. Place that valve on the out-of-control fire hydrant and stop the running water. 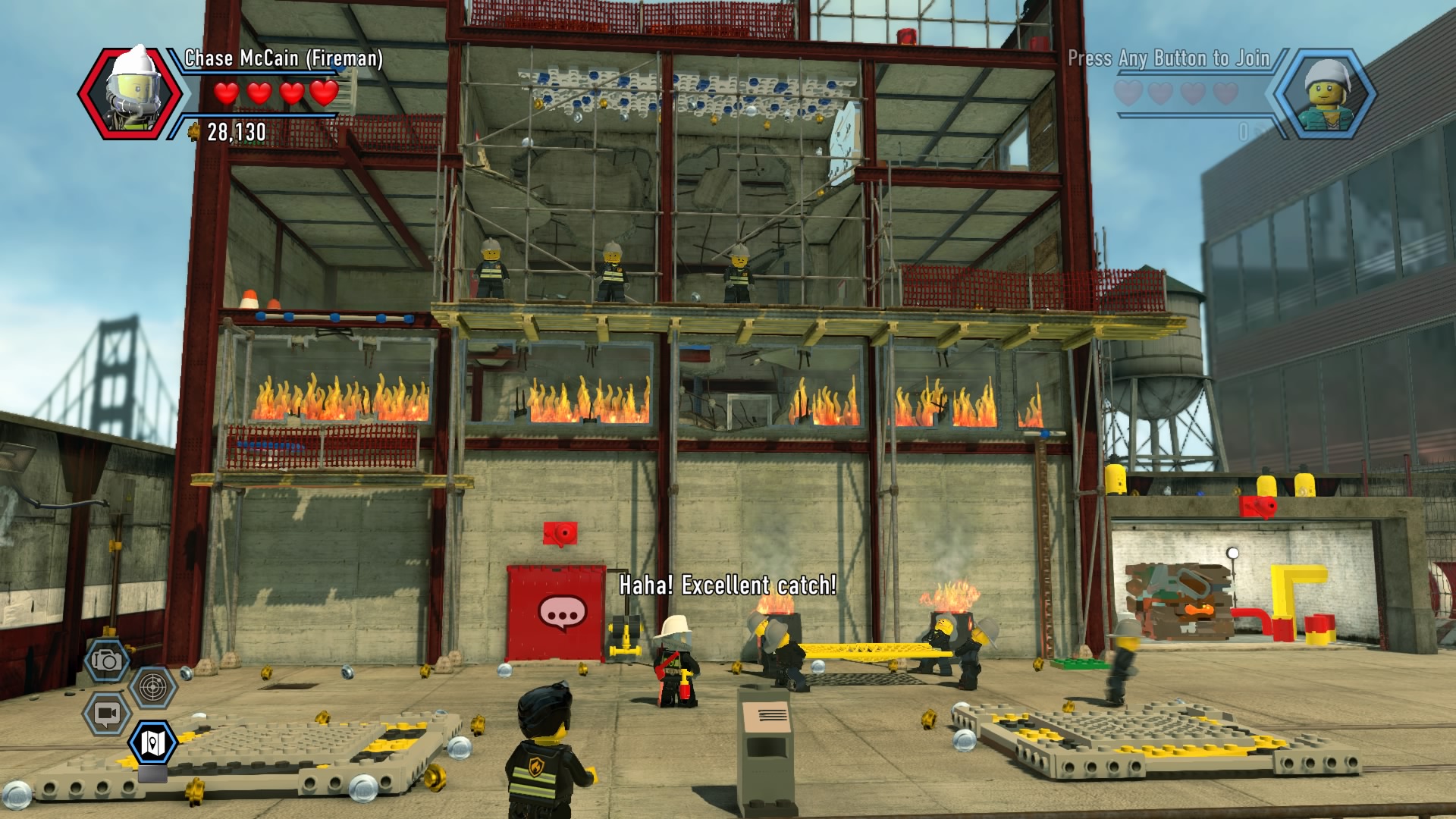 That completes the first step of your training – the gate to the left will open. Run to the waypoint to begin a new mini-game: you’ll be in control of the trampoline as your co-workers mock jumping out of a burning building.

Simply match the waypoints to complete this step, then board the water cannons to put out all nine fires on the structure. 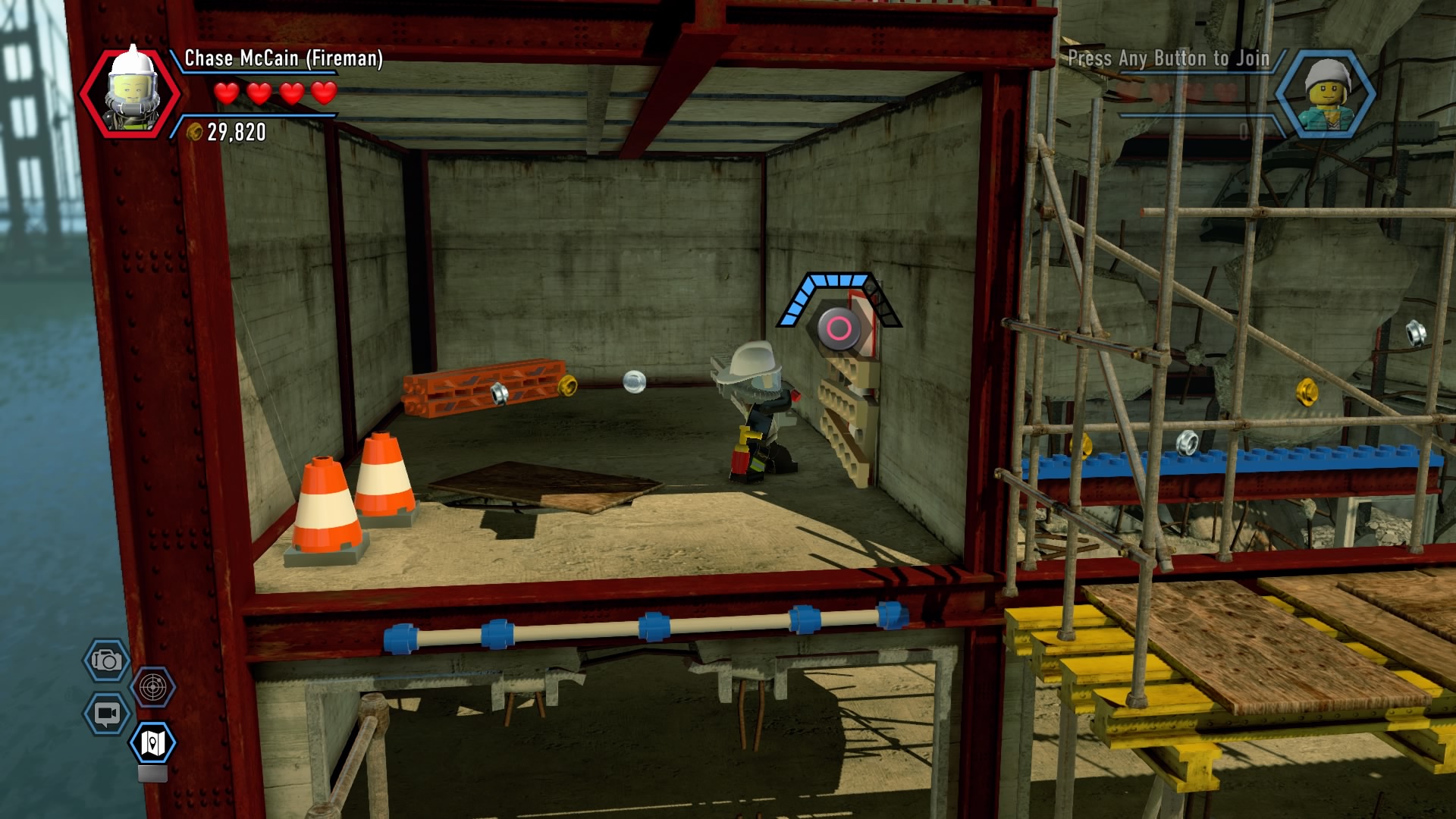 The next task isn’t as easy. Chase must… rescue a cat. Start by picking up the LEGO crate through the open doors and place the pile on the green waypoint spot. Construct the ladder, jump up, and go left through the burnt interior.

On the left, hop back out through the ruined windows and use the bounce pad to reach the third floor. Break down the doors with the fire axe (Fireman Disguise) and use the balcony to find blue / white LEGO pipes. Jump down and climb up to the fourth floor.

Break down the wooden door on the fourth floor, then grab a dynamite bundle with the Miner Disguise. Place it on the metallic LEGO wall, bust through the door ahead with the fire axe, and pull down the ladder with the Grapple Gun.

Finally on the rooftop, smash the right LEGO crate and use the waypoint spot to take control of the RC car. Drive the dynamite car through the red LEGO slot and to the second waypoint to blast a hole in the wall. Only the Fireman Disguise can use the fish symbol to lure cats down.

That’s it for your training! Now Chase can go to the Chief’s Birthday party through the open door into the Fire Station. 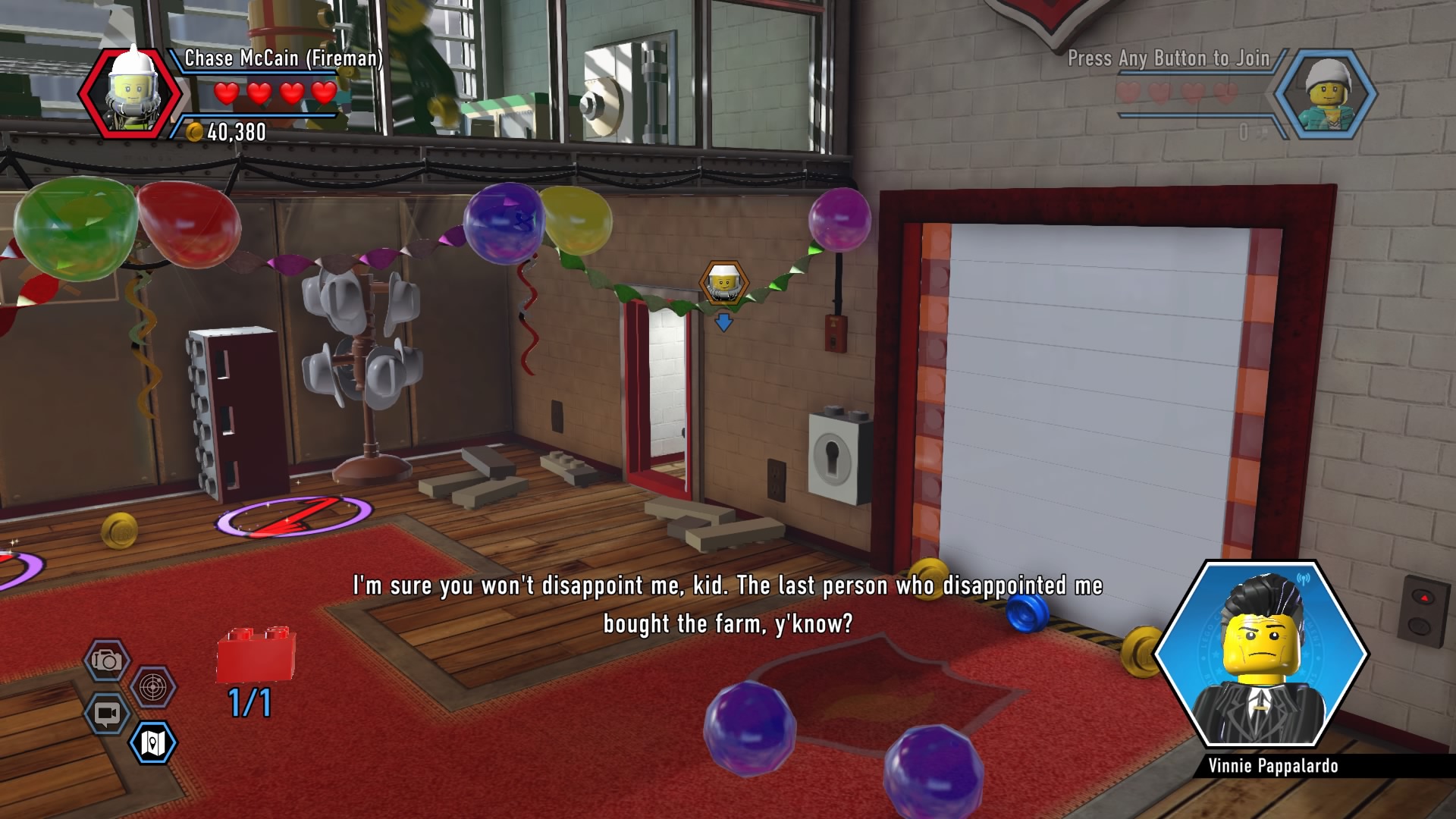 Welcome to the Fire Station! It’s a pretty nice place, and Chase is one step closer to that boat. But first, you’ll need to lure the Chief out of his fancy second floor office.

Red Brick Location: The Red Brick for this level is located through the boarded-up fire axe door to the right of the pair of crowbar marker lockers, next to the Fire Station interior starting point.

To trick the Chief into leaving, you’ll need to complete the water balloon mini-game. Just to the left of the starting point, you’ll see a carnival game. Use it with the Fireman Disguise and aim for the clown faces when they turn to face Chase. Shoot all the faces until the five balloons burst.

Angry at all the fun being had, the Chief will rush out of his office. The coast is clear! Now you can get in! Well, you could if the door was open. You’ll have to jump in from above. To get started on that, smash all the LEGO chairs near the Chief’s office to reveal a Detective Scan marker. Use it to get a key into the offices on the left (second floor) and go inside.

In the offices, break the present pile and build to create a bounce pad. Hop up onto the wall, then start jumping right across the light fixtures. The final jump is too long for Chase – unless you’re wearing the Farmer Disguise! Swap and use the Chicken Glider ability to float into the Chief’s office ceiling.

Crack open the vent with the Robber Disguise, drop in, and open the safe. Take the key, use the terminal to open the office door, then return to the first floor to open the garage door. 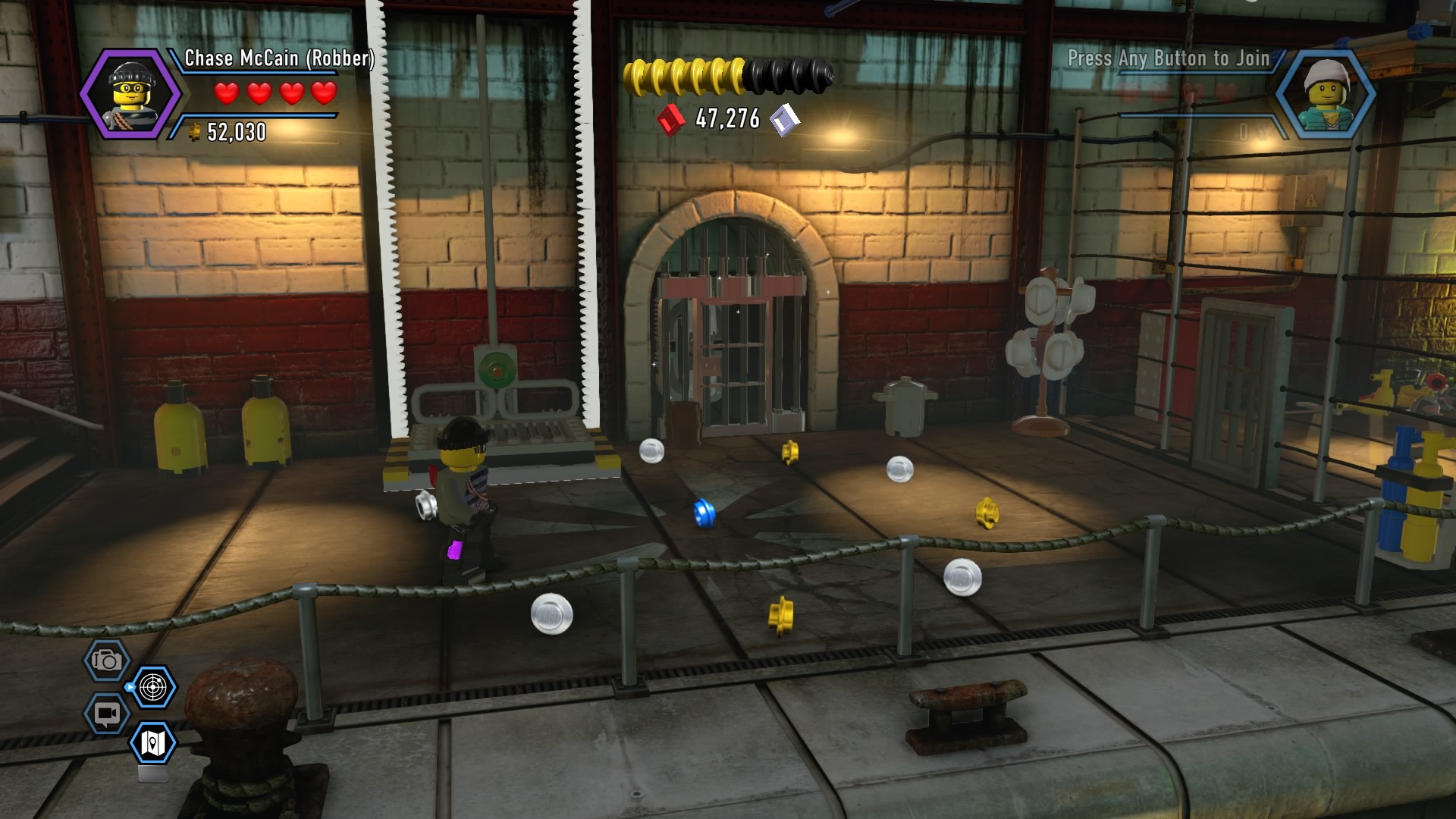 Slide down the pole to reach the lower floor of the Fire Station. You’ll need to cross just a few more obstacles before chase can steal the Fireboat. Bust open the hat rack near the gate, then activate the Detective Scan. It leads to an ice machine with a green valve inside. Attach the valve to the lift to manually wheel Chase up to the Free Run pole. Use it to get over the gate.

Now we’re getting somewhere! Drop down from the left and smash the LEGO crate to build a Space Crate. Complete the puzzle to summon down a TNT Vending Machine. Use that with the Miner Disguise (crowbar open the door on the way) and place the dynamite in the barrel near the metallic LEGO gate.

Get the red color from the Color Swapper to deactivate the fans and reactivate a Super Chicken glide marker. Use the green valve lift again to return to the Super Chicken marker and then use the Farmer Disguise float ability to reach the opposite end of the long gap.

In the next room, you’ll encounter a couple of Vinnie’s men here to help out Chase. They’re stuck behind an electric fence. To solve that problem, bust open the blue / white LEGO bricks and create a catapult pad. Right it to the right side of the water and shoot the green button with your red color gun. That deactivates the electricity. 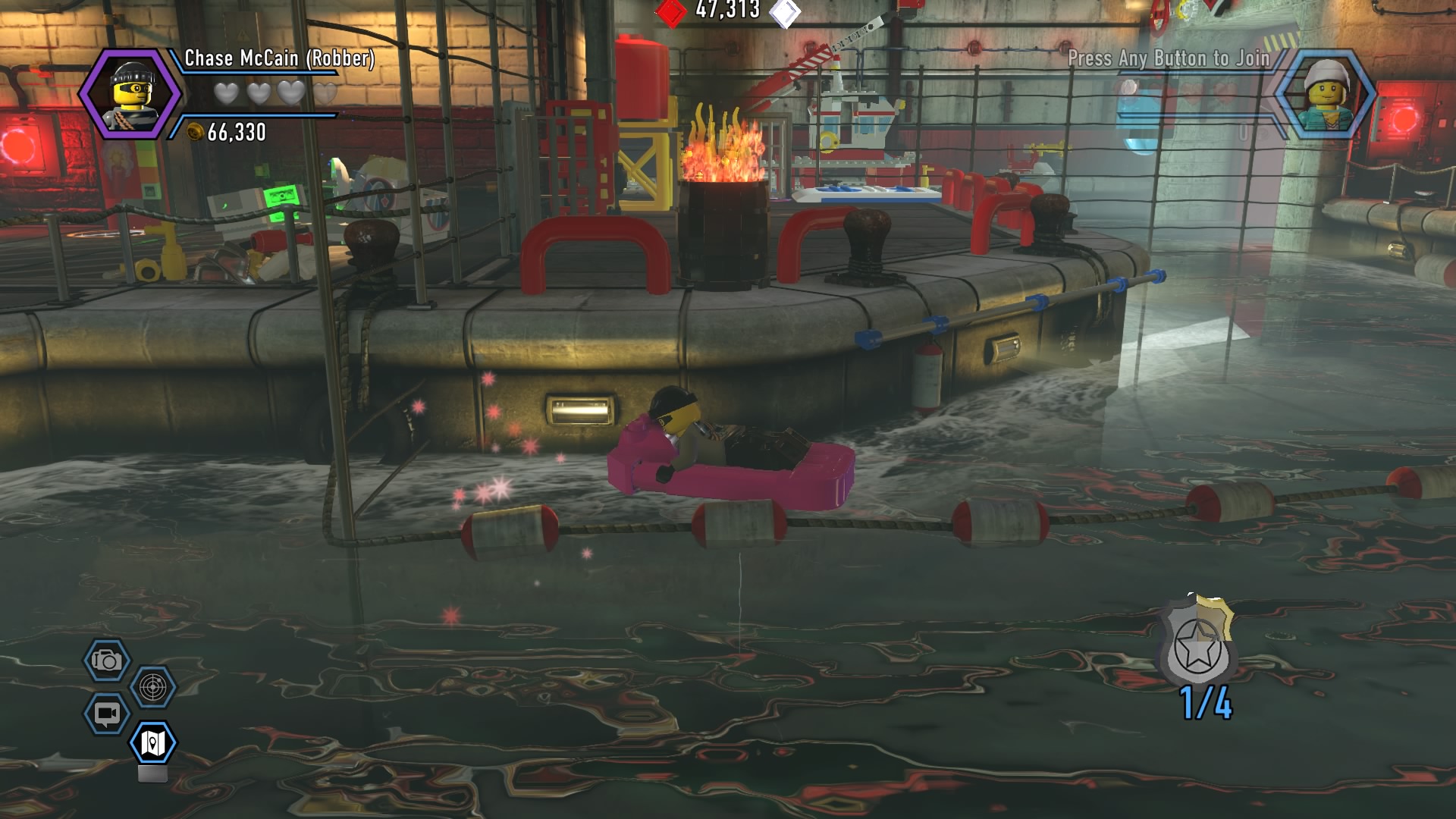 Use the lever to drop a flotation device into the water. Follow the studs that appear (and drive the device like a vehicle!) to return to dry land on the left side. Now Chase can break open the door to the goons with his trusty Robber Disguise crowbar.

Police Shield: A Police Shield part appears at the end of the stud path that appears after riding the flotation device. Follow the studs past the blue / white ledge to discover this piece.

Hop into the fireboat and Chase will man the water canon. Aim for the water symbol (directly on it!) to fill the tank and open the exit door.

After delivering the fireboat to Vinnie, Natalia calls with another urgent matter. Goons in black suits are closing in on the hospital. Get down to Mercy Hearts Hospital to avert another impending kidnapping! You can use the nearby speedboat Vinnie helpfully left behind in the Crosstown Tunnel.

Get to the marker to start the rescue operation. 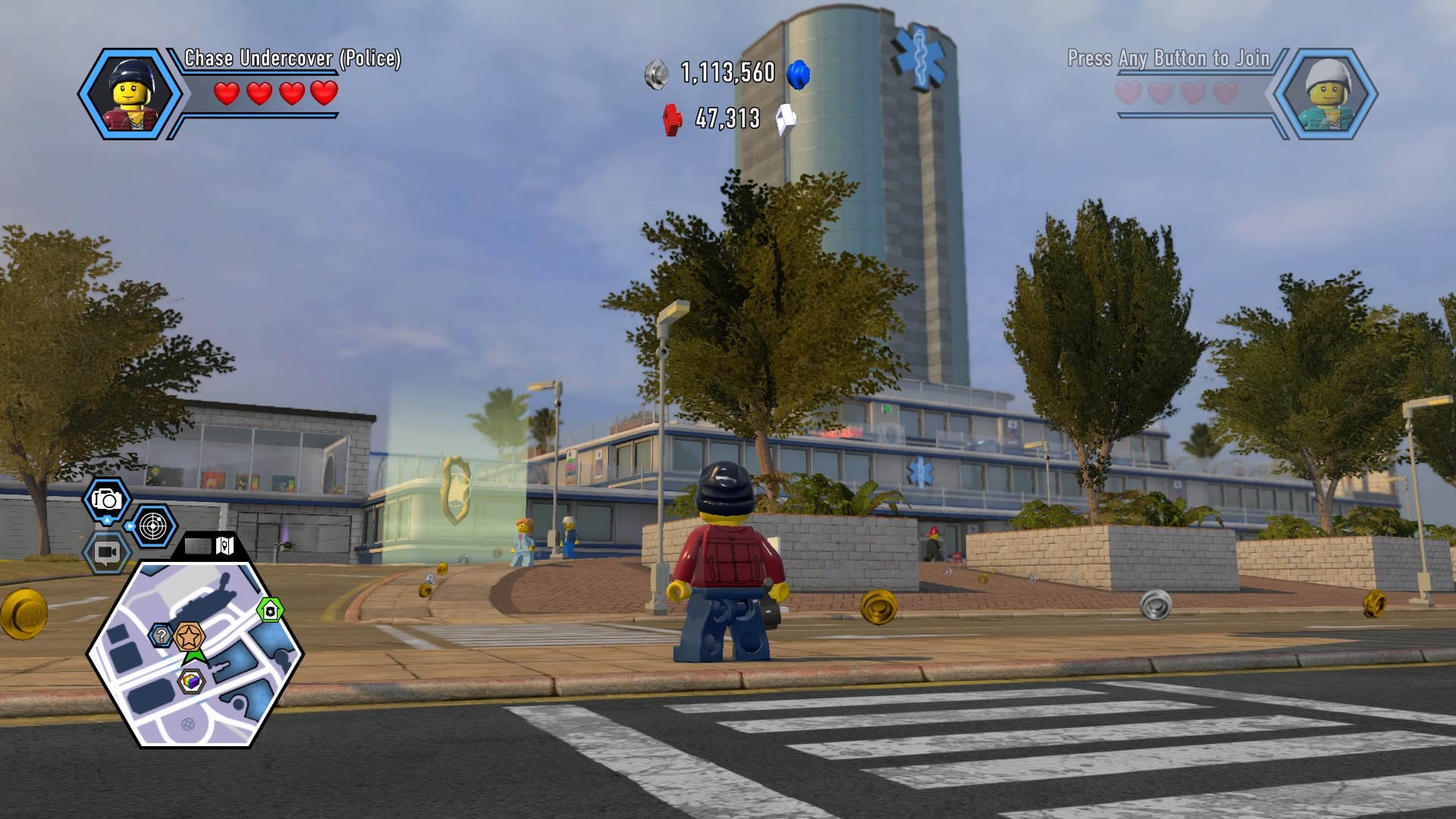 Things get started fast. The thugs start a fire in the open garage – you know what to do now! Swap to the Fireman Disguise and put out the fires to get inside. Bust the goons and crack open the safe (to the right) to find a keycard. Use it on the terminal to open the elevator door.

There’s a bonus 10k Super Brick inside! Take it and ride up to the second floor of the hospital. Up here, put out the fires on the walkway, then collect a TNT charge from the dynamite vending machine. Jump through the new hole and put out the fires here to construct a red LEGO potted plant. Water the plant with the Farmer Disguise.

On the third floor, arrest the new enemies and look at that blue LEGO brick strip on the walkway you just bombed. Cross over to the left rooftop, defeat the pair of thugs, put out the fire and crack open the ceiling hatch to drop down inside. Grab red for the Color Gun from the Color Swapper, then crowbar your way out of the room. 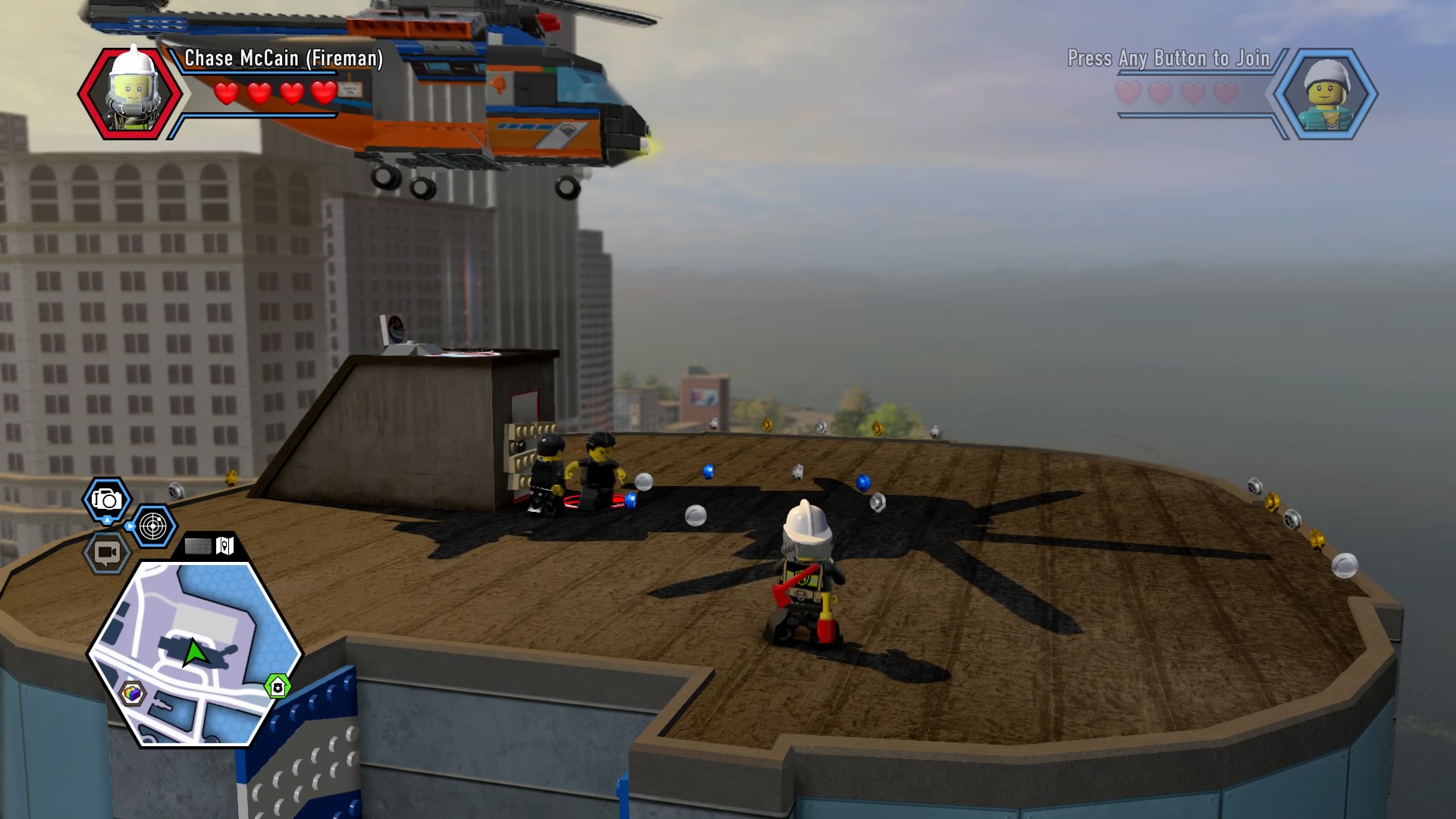 Now Chase needs to reach her. Defeat both bad guys, then fire axe the boarded-up door. Use the Teleporter Pad (Astronaut Disguise) and grab the blue color from the Color Swapper at the end of the h all. Return through the Teleporter Pad and shoot the right LEGO wall with blue color. Remember how Chase can Free Run on anything that’s blue / white? Climb up your new blue / white wall.

At the top, fire axe the door and run to the left, all the way to the tall tower on at center of the hospital. There’s a very, very long wall-jump path to the top of the high-rise. When you make it, there are several waves of guards – arrest them all to make the Super Chicken glide marker appear. Use it with the Farmer Disguise and glide over to finally rescue Natalia.

Complete the helipad Super Build (20k Super Bricks) and call-in a helicopter to escape. You’ll also unlock the ability to fly / call-in helicopters from this point on – pretty snazzy, right? Drop Natalia at Ellie’s place so she can lay low.